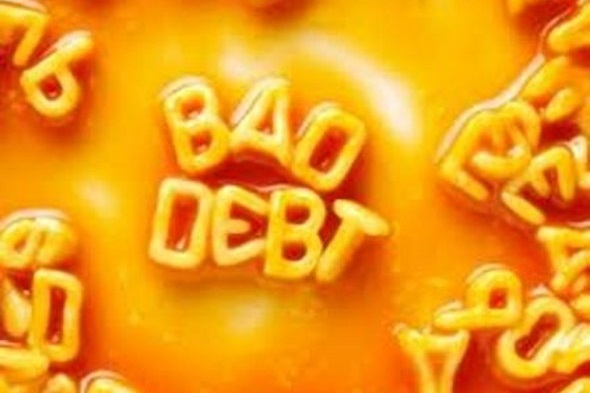 It’s almost impossible to get through life without taking on debt at some point or another. Between using student loans to go to college, taking out an auto loan for your first car or qualifying for a mortgage your first house, debt seems to be a part of most people’s lives. That’s not to say that you have to live with debt forever, but just you will likely be in debt at sometime.

Unfortunately, it seems too many people have let debt become the norm and in general, people are no longer phased by carrying around a few thousand dollars of consumer debt or having student loan payments until they retire.

While having debt is never really a good thing (as in you owe someone money and are thus somewhat beholden to them), in the personal finance world, there are debts that are sometimes referred to as “good debts,” while others are considered to be “bad debt.”

In general, good debt is when you use it to buy something you need but can’t afford to pay for all at once, while bad debt is used to get something you don’t need and can’t afford. Good debt is also often associated with appreciating assets (things that go up in value) that add to your net worth. On the other hand, bad debt is often associated with depreciating assets (things that go down in value).

But sometimes figuring out the category for your debt and why can be confusing. Here are three types of debt commonly considered to be good debt and why:

The first debt many of us take on in our lives is student loan debt. Luckily, most people consider student loans to be good debt because taking on student loans to obtain a higher education often results in your landing a better career and therefore increasing your earning potential.

It’s common knowledge that people with a college degree tend to earn more than those without a college degree, but what you decide to study can also have a huge effect on your earning potential. For people who study things that have a set career path, student loans may indeed be good debt and an investment into their future, but for those who choose to study something without many potential jobs, student loans may end up being just another payment they have to make each month. It’s a good idea to consider how long it will (likely) take you in your chosen field to pay off those student loans to see if it is really worth it.

Buying a home is often thought of as an exciting step toward becoming an adult, and for most that means taking on a mortgage. Mortgages are considered good debt because buying a house is usually seen as an investment. If the real estate market rises, you might be able to profit when you sell your home down the road. Plus, in the meantime real estate mortgage interest is tax deductible.

Starting your own business can be a very costly endeavor no matter what industry you are going into, and taking on business debt to start your own money-making operation is another form of good debt. Similar to student loans, business debt is supposed to be taken on to help you increase your future earning potential.

Meanwhile, some examples of bad debt include credit card balances, auto loans and personal loans. These traditionally carry higher interest rates and so will cost you more in the long run. Sometimes you will hear (or read) people who don’t carry a balance on their credit card say (or write) that they are debt-free. Of course, if they have student loans or a mortgage, this isn’t technically true. But if you are prioritizing which debts to pay off first it is a good idea to start with the bad debt. Just keep in mind that all debt has to be paid back eventually!

Do you believe in good debt and bad debt? Why or why not?

Kayla Sloan Kayla Sloan is a writer with an expertise in debt, budgeting and saving money. She is focused on paying off her consumer and student loans, while simplifying her life and closet. Kayla's work has been featured across the web, including on The Huffington Post, Time, credit.com and AOL. You can follow her as she blogs about her journey out of debt at www.kaylasloan.com.
Share Tweet
Related Posts
Read next article