States With the Worst Drivers – 2021 Edition 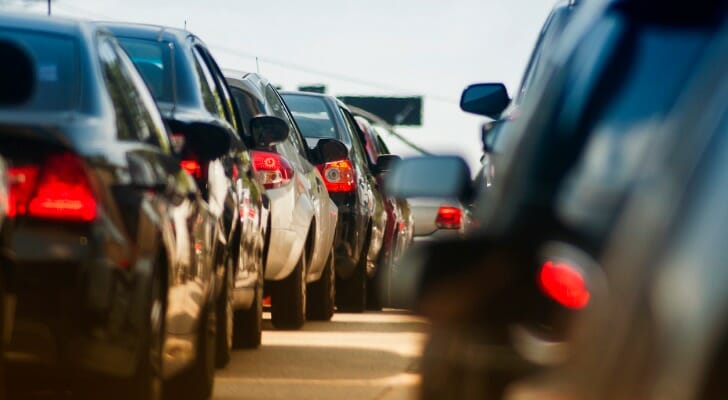 Whether you were once cut off by a car with Florida license plates or mercilessly tailgated by a driver in New York, we’ve all had bad experiences with drivers from other states (or our own) at some point. Besides the road rage, these situations can give us a lot of grief when it comes to managing expenses, but it often varies by location. Which states truly have the worst drivers?

To find out which states have the worst drivers, we dug deep into relevant data and considered four metrics: percentage of drivers who are insured, number of driving under the influence (DUI) arrests per 1,000 drivers, number of fatalities per 100 million vehicle miles driven and how often residents Google terms like “traffic ticket” or “speeding ticket.” For details on our data sources and how we put all the information together to create our final rankings, check out the Data and Methodology section below.

This is SmartAsset’s fifth annual study on the states with the worst drivers. See the 2020 version here. 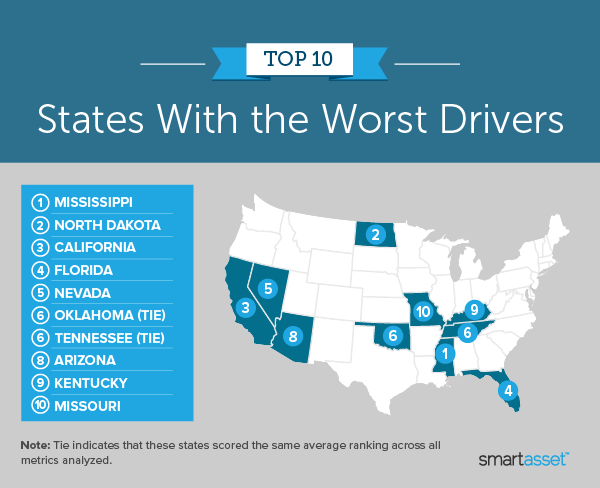 Mississippi has the lowest percentage of insured drivers (70.6%) of all 50 states, as well as the second-highest fatality rate per 100 million vehicle miles driven at 1.56. The Magnolia State also has the fifth-highest ratio of Google searches for “speeding ticket” or “traffic ticket” relative to searches for “gasoline” (3.28).

North Dakota, which ranked 20th on last year’s list, jumps up to the No. 2 spot this time around. No state has more DUI arrests per 1,000 drivers than North Dakota (8.68). The state also ranked third for its relatively high number of Google searches for “speeding ticket” or “traffic ticket” relative to searches for gasoline.

While California has more drivers than any other state in the country, only 83.4% of them are insured – the ninth-lowest percentage for this metric. The Golden State, meanwhile, also has the 15th-highest number of DUI arrests per 1,000 drivers (4.42) and sixth-highest rate of Google searches for “speeding ticket” or “traffic ticket” relative to gasoline-related searches (3.25).

Florida, whose drivers also ranked fourth-worst in last year’s study, has the sixth-lowest percentage of insured drivers, 79.6%, this time around. The Sunshine State has the ninth-highest number of fatalities per 100 million vehicle miles driven (1.41) and the ninth-highest ratio of Google searches for “speeding ticket” or “traffic ticket” to Google searches for “gasoline” (2.88).

With the highest rate for the Google search metric, Nevada takes the No. 5 spot for worst drivers, according to our study. Home to Las Vegas and the Hoover Dam, Nevada also has the seventh-most DUI arrests per 1,000 drivers and is tied for having the 26th-highest fatality rate per 100 million vehicle miles driven.

The Sooner State is another newcomer to this year’s top 10. Oklahoma has the sixth-highest fatality rate per 100 million vehicle miles driven, at 1.43. The state also has the 17th-lowest percentage of insured drivers, as roughly 87% of drivers there are insured.

Tennessee, which was rated as the No. 3 state for the worst drivers in America last year, is tied for No. 6 this year. The Volunteer State has the third-lowest percentage of insured drivers (76.3%) and the 11th-highest rate of fatalities per 100 million vehicle miles driven (1.37). When it comes to DUI arrests, Tennessee is middle of the road, at 25th overall.

Arizona has the 10th-highest number of fatalities per 100 million vehicle miles driven, at 1.40. Meanwhile, the Grand Canyon isn’t all that Arizona residents are searching for on Google. The state has the eighth-highest rate in the study of “traffic ticket” and “speeding ticket” Google searches relative to gasoline-related searches.

Kentucky earned a spot in the top 10 by having the fourth-highest number of traffic fatalities (1.48) per 100 million vehicle miles driven and the 10th-highest DUI arrests per 1,000 drivers. This state also has the 16th-lowest figure among all 50 states for the number of drivers with auto insurance – 86.1%.

The Show Me State has the 11th-lowest insurance rate (83.6%) and 11th-highest rate for the Google search metric we considered. Missouri drivers were ranked the country’s 18th-worst last year.

To find the states with the worst drivers, we looked at data on all 50 states across these four metrics:

Tips for Managing the Roadmap to Financial Success