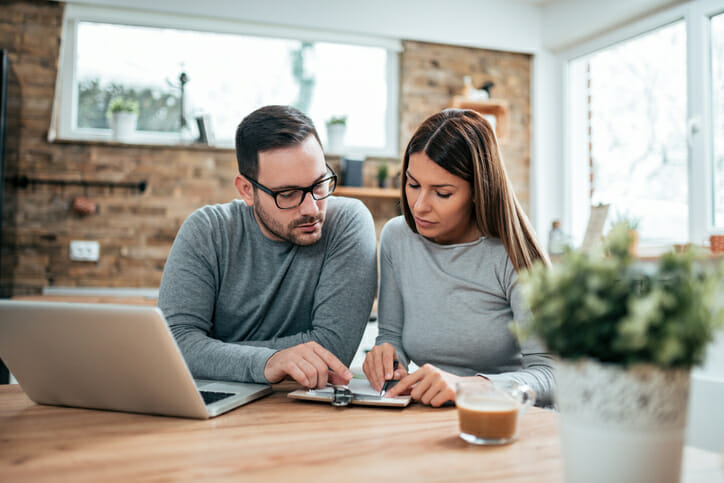 Is tax season a time when you look forward to an eventual refund or dread a looming tax bill that could cost you thousands of dollars? Taxpayers who owed the IRS money when they filed their 2019 federal tax return faced an average tax bill of $5,893. That’s $272 more than one year earlier when those who underpaid their taxes during the year ended up owing $5,621.

To compile our rankings, we analyzed IRS data for all 50 states and the District of Columbia across two metrics from 2019 (the latest year available): the number of tax returns with underpayments and the total amount underpaid in taxes. For details on our data sources and how we put all the information together to create our final rankings, you can read more in the Data and Methodology section below.

This is SmartAsset’s fourth study on the states with the largest tax bills. Check out the 2021 version here. 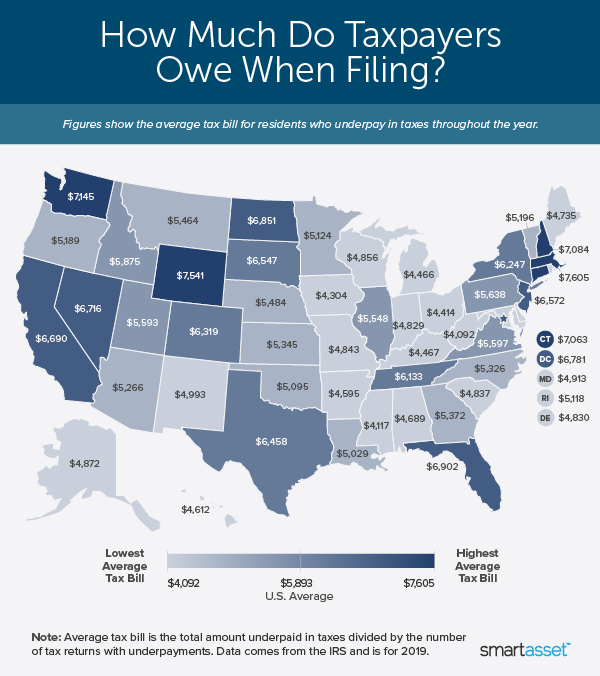 Taxpayers in Washington with underpayments in 2019 owed an average of $7,145, third-most in the U.S. Meanwhile, 23.21% of all tax returns filed in the Evergreen State had underpayments. Those underpayments equaled more than $6.2 billion, the nation’s eighth-largest sum in 2019.

The Live Free or Die State had the fourth-highest average tax bill in 2019. New Hampshire taxpayers who underpaid that year owed an average of $7,084 at tax time. Of the 723,640 returns filed in 2019, 20.44% had underpayments. New Hampshire had a total of $1.04 billion in underpaid taxes, 36th-most across our study.

The third New England state in the top 10, Connecticut taxpayers who underpaid their taxes in 2019 owed an average of $7,063. Nearly 400,000 tax returns had underpayments that year totaling $2.82 billion, which was more than what was owed 30 other states.

Florida had the sixth-highest average tax bill in 2019, as taxpayers who underpaid that year owed $6,902 on average. IRS data shows there were 2.19 million tax returns with underpayments in 2019 totaling $15.1 billion in taxes owed (third-most).

The nation’s capital had the eighth-highest average tax bill in 2019, as taxpayers who underpaid their taxes owed an average of $6,781. Of the 351,550 tax returns filed in the District of Columbia that year, 24.96% had underpayments.

With an average tax bill of $6,716, Nevada taxpayers owed the IRS the ninth-most money in the nation in 2019 on average. The state had a total of 310,130 tax returns with underpayments adding up to $2.08 billion in owed taxes.

The Golden State had the highest percentage of tax returns with underpayments (26.11%) in the country in 2019. The average taxpayer who underpaid their taxes that year owed $6,690 to the IRS, the 10th-highest average across our study.

To find the states with the largest tax bills, we examined data for all 50 states and the District of Columbia, focusing on two metrics:

For each state, we divided the amount of total underpaid tax (the money taxpayers owed) by the number of tax underpayments in that state. The result represents the average underpayment amount for taxpayers who underpaid on taxes throughout the year. We used this dollar figure for each state to rank the entire list from highest to lowest.

Tips for Managing Your Tax Liability