Places Where Inflation Has Spiked the Most – 2022 Edition 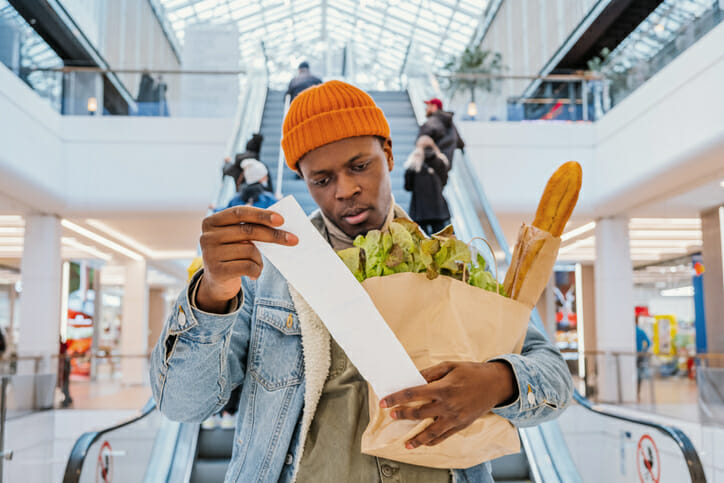 With rapidly climbing food, rent and gas prices, inflation is the highest it has been in four decades. Data from the Bureau of Labor Statistics (BLS) shows that the Consumer Price Index (CPI), which measures the change in prices paid by urban consumers for goods and services, increased 7.9% during the 12-month period that ended in February 2022.

While this increase is not uniform across spending categories (gas has risen 38.0% while prices for medical care services increased only 2.4%), it also differs geographically. In this study, SmartAsset identified the metro areas with the largest and smallest one-year increases in inflation. We additionally discuss how rising prices affect individuals and some tips to protect yourself against inflation.

This is SmartAsset’s second study on the places where inflation has spiked the most. Read our 2021 edition here, which looks at last year’s rates from the summer.

To find out where inflation has spiked the most, we examined all 23 U.S. metro areas with available data from the Bureau of Labor Statistics’ Consumer Price Index. However, data for each metro area is not released every month. As a result, the most recent changes in the CPI for 14 metro areas are for the 12-month period ending February 2022, while the rest are as of the 12-month period ending January 2022. 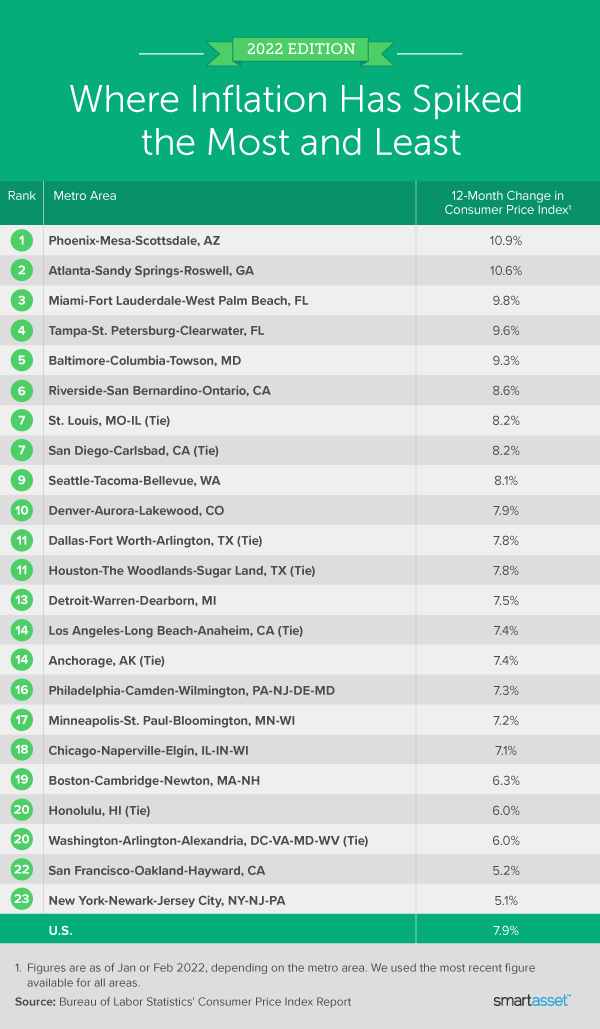 Places With the Largest Inflation Spikes

Across the 23 metro areas in our study, the CPI rose the most in Phoenix-Mesa-Scottsdale, Arizona, increasing by 10.9% for the 12-month period ending February 2022. Over the past year, the price of food & beverages and housing rose 7.7% and 12.4%, respectively, in this metro area.

Places With the Smallest Inflation Spikes

The 12-month inflation rate increased in all 23 metro areas we considered. However, in addition to New York-Newark-Jersey City, the inflation rate is 6% or lower in three other metro areas: San Francisco-Oakland-Hayward, Washington-Arlington-Alexandria, and Honolulu.

Some researchers theorize that these areas still suffer from depressed housing demand because of the COVID-19 pandemic. Nationally, rent prices rose 4.2% over the 12-month period ending February 2022. In comparison, 12-month increases in rent for the four metro areas with the smallest overall inflation spikes are shown below.

In contrast to rent, increases in food prices in three of those four areas outpace the national average (7.9%). BLS data shows that food prices rose by 8.1% in New York-Newark-Jersey City, 9.0% in San Francisco-Oakland-Hayward and 8.4% in Honolulu. In the Washington-Arlington-Alexandria, food prices are rising slightly less quickly, at a rate of 6.7% for the 12-month period ending January 2022.

How Does Inflation Affect Individuals?

High inflation rates affect discretionary income for the average American. As prices for food, gas, household goods and other items rise, Americans must adjust how they budget. Additionally, Brian Stivers, investment advisor and founder of Stivers Financial, says that for many individuals the day-to-day cost of living may move beyond take home pay, meaning that individuals either need “to make dramatic cuts in their spending or find ways to create more income.”

High inflation may also affect individuals’ investment accounts and retirement savings. Historically, high inflation has correlated with lower returns on equities. While a diversified or more conservative portfolio may fare better, short-term effects can be particularly harmful for already retired individuals, who are living off a fixed budget.

Tips for Protecting Yourself Against Inflation