Best Places for Outdoor Enthusiasts to Live and Work – 2021 Edition 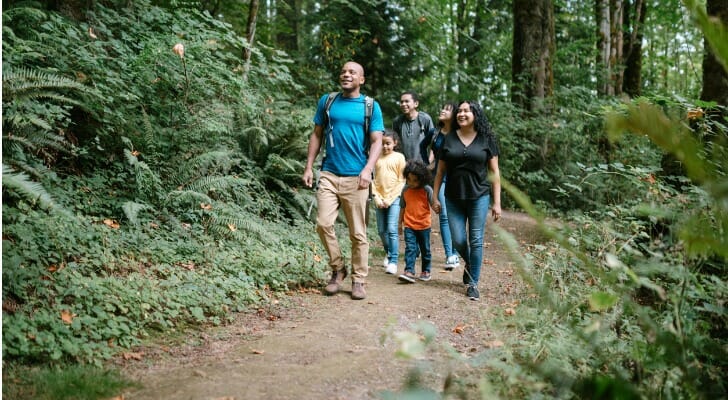 As the COVID-19 pandemic upended daily life and caused nationwide shutdowns, more people participated in outdoor recreation in 2020 than ever before. More than 50% of Americans ages 6 and older participated in outdoor recreation (like biking or hiking) at least once, according to the 2021 Outdoor Participation Trends Report commissioned by the Outdoor Foundation. The outdoor recreation boom resulted in 7.1 million more people getting outside in 2020 than in 2019. In light of this uptick, SmartAsset set out to find the places that are best for outdoor enthusiasts to live and work.

To conduct this study, we compared 95 cities across the following metrics: down payment-to-income ratio; five-year change in median household income; July 2021 unemployment rate; percentage of commuters who walk or bike to work; nature parks and campgrounds per 100,000 residents; air pollution; percentage of the city that is parkland; state outdoor recreation economy; and state and national park coverage. For details on our data sources and how we put all the information together to create our final rankings, read the Data and Methodology section below.

This is our second study on the best places for outdoor enthusiasts to live and work. Check out our 2020 edition here. 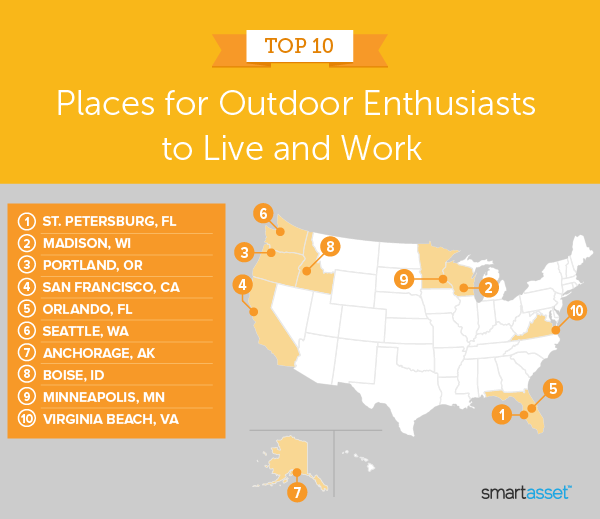 St. Petersburg, Florida, is a haven for outdoor enthusiasts. St. Petersburg ranks 13th-best for air quality and 14th-best for its relatively high percentage of parkland (17.64%). Meanwhile, the state’s outdoor recreation economy is ranked second overall nationally. St. Petersburg also has the 18th-lowest unemployment rate, which was 4.4% in July 2021.

The Wisconsin state capital has a top-10 ranking in three metrics: unemployment rate, percentage of commuters who walk or bike to work and nature parks/campgrounds per 100,000 residents. Unemployment in Madison was just 3.1% in July 2021 (the fourth-lowest percentage for this metric), while 14.0% of commuters there walk or bike to work (the fourth-highest). Dane County, where Madison is located, has the eighth-highest number of nature parks and campgrounds for every 100,000 residents (1.46).

Situated in the shadow of Mt. Hood, Portland, Oregon, has long been an adventure hub for outdoor enthusiasts. Multnomah County ranks third for its number of nature parks and campgrounds per 100,000 residents (2.63), while 11.5% of commuters in Portland walk or bike to work (the eighth-highest percentage for this metric across our study). Meanwhile, nearly 18% of Portland is covered by parkland (13th overall), including the 5,100-acre Forest Park, one of the country’s largest urban forests.

San Francisco, California is more than just tech companies and pricey real estate. The City by the Bay has the second-highest percentage of commuters who walk or bike to work (16.7%) and the 10th-highest percentage of parkland (20.50%), including the 1,000-acre Golden Gate Park. The median income in San Francisco rose 45.60% between 2014 and 2019, the third-largest increase during that five-year period.

Orlando, Florida has the second-best air quality overall, with an average daily particulate matter of 5.2 (measured at the county level). Like St. Petersburg, Orlando benefits from Florida’s strong outdoor recreation economy. Orlando also boasts the seventh-best five-year change in median household income, which rose 43.18% from 2014 to 2019.

Seattle, Washington has the third-highest percentage of commuters who walk or bike to work (14.4%). Between 2014 and 2019, the median household income in Seattle increased 44.40%, the sixth-largest jump across this five-year period in the study. Seattle also has the 23rd-best ranked air quality across this year’s study, with an average particulate matter of 7.7.

It’s perhaps no surprise that Alaska’s largest city is among the best places for outdoor enthusiasts. Anchorage ranks No. 1 for both its high percentage of parkland (84.17%) and high number of nature parks and campgrounds for every 100,000 residents (5.90). Over 9% of Alaska is covered by state and national parks, the second-highest percentage in our study for this metric. Anchorage also has the sixth-best air quality across our study, with an average daily particulate matter of 6.4.

With low unemployment and relatively little air pollution, Boise, Idaho is among five Western cities in the top 10. Boise’s July 2021 unemployment rate ranks third overall (2.8%), while its average daily particulate matter is the fourth-best (6.2). Idaho’s largest city also has the 14th-highest percentage of commuters who bike or walk to work (7.9%).

With almost 7,000 acres of parkland and water, Minneapolis takes the No. 9 spot in our 2021 study. July 2021 unemployment in this city was 3.7%, tied for the eighth-lowest overall. Minneapolis also has a surprisingly high percentage of commuters who walk or bike to work (11.6%), the seventh-highest rate for this metric across the study.

Virginia Beach, Virginia, offers residents ample access to water, given its location at the mouth of the Chesapeake Bay. This city is tied with Minneapolis, Minnesota for the eighth-lowest unemployment rate in July 2021 (3.7%). Virginia Beach also has the ninth-cleanest air across the study (6.7 daily particulate average). 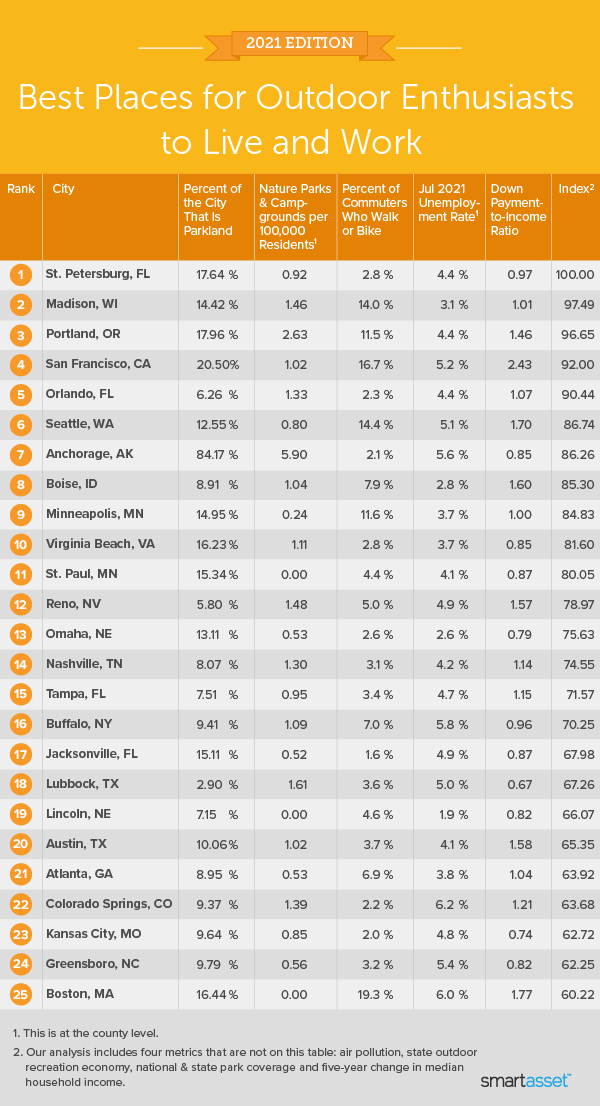 To find the best cities for outdoor enthusiasts to live and work, we compared 95 of the largest U.S. cities across the following metrics:

First, we ranked each city in each metric. We then found the average ranking, with each metric given an equal weight except for July 2021 unemployment rate (to which we assigned a double weight), and the two state-level metrics (national and state park coverage and state outdoor recreation economy – to which we assigned a half weight each). We ranked the cities based on these averages. The city with the highest average ranking received a score of 100 and the city with the lowest average ranking received a score of 0.