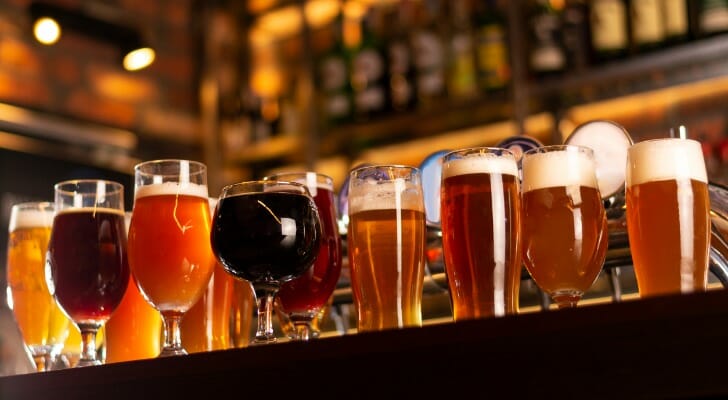 Powered by a craft beer boom, the beer industry has undergone a renaissance in recent years. The number of craft breweries in the U.S. nearly doubled between 2015 and 2020, reaching 8,764 as of last year, according to the Brewers Association for Small and Independent Craft Brewers. With so much new beer being brewed in the last decade, some cities have become synonymous with their local breweries and beer culture. It begs the question: what are the best cities for beer drinkers?

To find out, SmartAsset compared 366 cities across the following metrics: total number of breweries, breweries per 100,000 residents, average number of beers per brewery, bars per 100,000 residents and the average price of a pint. For details on our data sources and how we put all the information together to create our final rankings, check out the Data and Methodology section below.

This is SmartAsset’s seventh annual study on the best cities for beer drinkers. Read the 2020 version here. 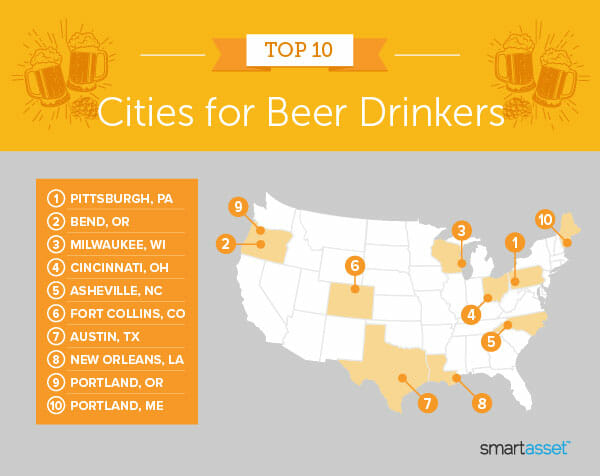 Known as a haven for outdoor enthusiasts and beer lovers alike, Bend, Oregon, has 24.5 breweries for every 100,000 residents, the third-most across our study. This small city of nearly 102,000 residents also ranks 20th for its total number of breweries (25), which includes the popular Deschutes Brewery.

Milwaukee’s beer scene extends well beyond the Miller Brewing Company. The city features the 10th-most total breweries (32) in our study and has the 13th-most bars per 100,000 residents (35.3). The average cost of a pint of beer in Milwaukee is just $4, tied for the 100th-cheapest with several other cities.

Cincinnati is a top destination for beer lovers, ranking 11th overall for total number of breweries (31) and 22nd for breweries per 100,000 residents (10.2). Breweries in this Queen City also feature an average of 128.4 beers, the 17th-most across our study. However, the average price of a pint rose from $4 to $5, which tied for 204th-cheapest on our list.

Situated in the Blue Ridge Mountains of North Carolina, Asheville has come to be known for its beer culture thanks in part to its 25 breweries (the 20th-most). The city ranks second overall for number of breweries per 100,000 residents (26.9) and 29th for average number of beers per brewery (105.8).

Austin, Texas ranks among the best cities for beer drinkers, largely due to its sheer volume of breweries. The state capital boasts a total of 41 breweries, the sixth-most across in our study. Austin also has a vibrant bar scene that features just over 24 drinking holes for every 100,000 residents. Only 40 other cities have more bars per capita.

It should come as no surprise that a city known for its raucous nightlife and Mardi Gras festivities is a beer drinker’s haven. With 56 bars for every 100,000 residents, New Orleans ranks first overall for this metric. The city is also home to 16 breweries, which puts it in the top 15th percentile in this category.

Although smaller than its West Coast counterpart, Portland, Maine, is a beer mecca in its own right. With 20 in total, Portland has more breweries for every 100,000 residents than any other city, including the popular Allagash and Bissell Brothers brewing companies. Portland also ranks 69th-highest for bars per 100,000 residents, at 18.1.

To find the best cities for beer drinkers, we considered all the cities included in the 2020 Census with a population of 60,000, at least one brewery and available Numbeo data. This resulted in a total of 366 cities, which we compared across the following metrics: