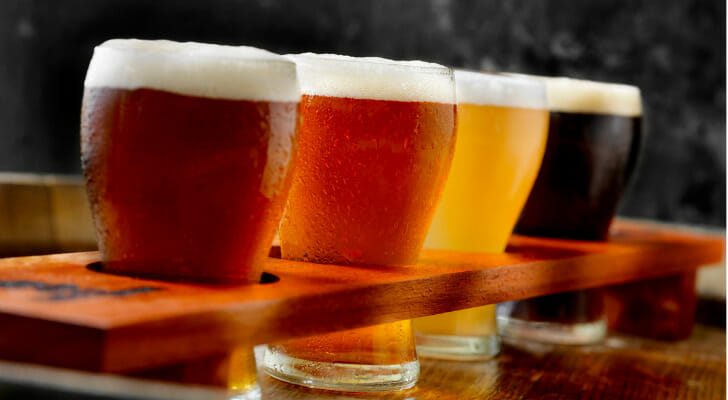 A tall, frosty glass of beer has proven welcome succor during the distressing COVID-19 pandemic: Through the first half of 2020, beer sales in the U.S. rose about 16% compared to the same period in 2019, according to Chicago-based market research firm IRI. Though lock-down orders and restrictions on bars and restaurants have changed the way Americans are drinking, they’re still spending their money to quench their thirst for a frothy pint. But not all cities are equally equipped to provide access to the working man’s amber nectar. So SmartAsset decided to find out which cities in America are best for those among us who consider themselves beer nerds.

To do so, we compared 384 cities across the following metrics: total number of breweries, breweries per 100,000 residents, average number of beers per brewery, bars per 100,000 residents and the average price of a pint. For details on our data sources and how we put all the information together to create our final rankings, check out the Data and Methodology section below.

This is SmartAsset’s sixth study on the best cities for beer drinkers. Read the 2019 version here. 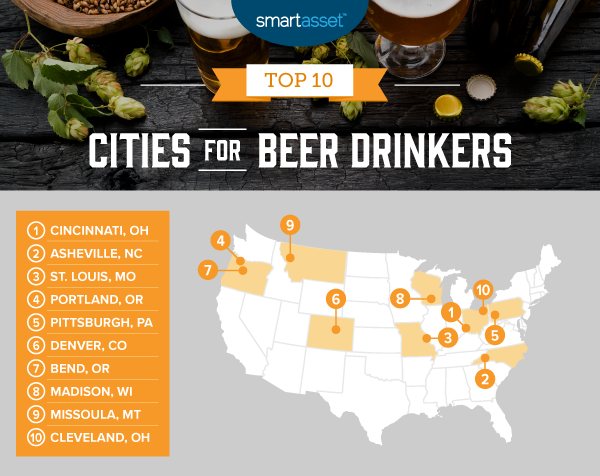 For the second consecutive year, Cincinnati, Ohio is the best city in America for beer drinkers. There are 31 breweries in the Queen City, the 10th-highest number for this metric in the study. That comes to 10.20 breweries per 100,000 residents, ranking 22nd out of 384 cities. Cincinnati breweries offer, on average, around 112 different beers, ranking 18th out of 384 cities.

Asheville, North Carolina makes the top 10 of this study yet again. The city has the second-highest number of breweries per 100,000 people in the study. There are 26 total breweries in Asheville, the 16th-highest figure in this metric across the 384 cities we analyzed.

There are 33.60 bars per 100,000 people in St. Louis, Missouri, the 18th-highest rate in this study and a density that gives locals plenty of watering holes to choose from. St. Louis has 23 breweries within its limits, ranking 27th for this metric. St. Louis ties for 81st, just inside the top quartile of the study, in terms of the price of an average pint, at $4.00.

In fitting with the city’s hipster credentials, there are 72 breweries in Portland, the fourth-highest rate for this metric of any city we studied. Though Portland has a relatively large population of more than 653,000, that still comes to more than 11 breweries for every 100,000 residents, the 15th-highest rate of any city included in this analysis. There are also more than 41 bars in Portland per 100,000 residents, ranking ninth out of 384 cities.

The 24 breweries in Pittsburgh, Pennsylvania give the city a 23rd-place ranking for total number of breweries. There are also plenty of places to drink both these local brews and more well-known malt beverages, as there are more than 30 bars per every 100,000 residents, good enough for 22nd place (though we’d recommend you don’t show up to any of them wearing a gear for any football team other than the Steelers). The average price of a pint in Pittsburgh is $4.00, tied for 81st overall.

Denver, Colorado is home to 80 breweries, the second-highest total of the 384 cities we analyzed. That comes to 11 breweries per 100,000 residents, which places the Mile High City at 16th for that metric. That said, the average price of a pint in Denver is $5.00, which is a bit more expensive than some of the other cities in this study, placing Denver in the bottom half of the study for that metric.

Bend, Oregon has nearly 25 breweries for every 100,000 residents, ranking third for this metric. There are about 100,000 citizens in Bend, so that means the raw number of breweries is also 25, the 20th-highest rate of the 384 cities we analyzed. A pint in Bend costs, on average, $4.50, which is a bit more expensive than some of the other cities on this list but still not as pricey as almost half the places examined, as it ranks 204th of 384 for that metric.

Madison, Wisconsin is a college town, but don’t let that trick you into thinking it’s all Busch Lite and Keystone. There are 17 breweries in Madison, which is the 44th-highest rate for this metric in the study, a top quintile finish. Madison ranks 30th in terms of the number of bars per 100,000 residents, at around 28, so students and others have plenty of places to get a brew and a basket of cheese curds to celebrate a Wisconsin Badgers victory. A pint costs, on average, $4.00.

Missoula only has nine total breweries, ranking 86th out of 384 for this metric. The relatively small population of 75,500, though, means that has nearly 12 breweries per 100,000 residents, which puts the college town at 13th for that metric. The low cost of cold one here may be the best thing Missoula has to offer to beer drinkers. The average price of a pint is just $3.50, which is the 35th-best price on this list.

The final city in the top 10 of this list is Cleveland, Ohio, which has 21 breweries within its borders, the 31st-highest number across all the cities we analyzed. The city has about 59 beers per brewery, ranking 106th out of 384 for this metric. The average cost of a pint in Cleveland is $4.00.

To find the best cities for beer drinkers, we considered all the cities included in the Census 1-year American Community Survey (i.e. with a population of 60,000+) with at least one brewery and available Numbeo data. This resulted in a total of 384 cities, which we compared across the following metrics:

Tips for Raising the Bar on Your Financial Management