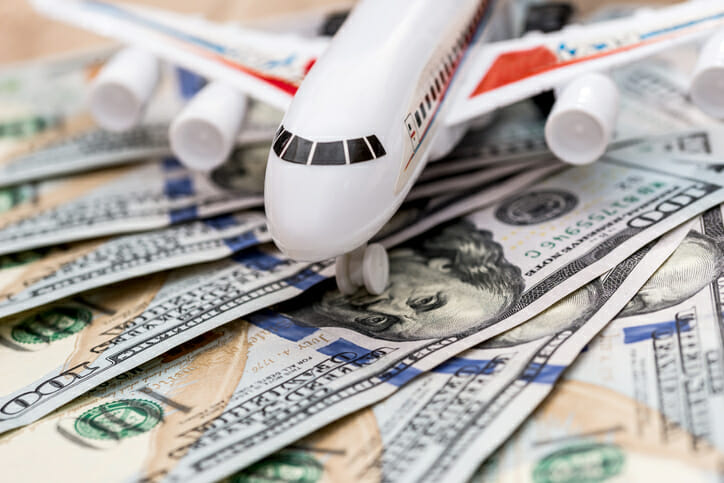 The price of jet fuel has increased by roughly 110% between the first quarters of 2021 and 2022 and as passengers return to the skies, some of those costs are passed on to consumers. In fact, airline fares spiked by 26% over the same time period, bringing the national average flight cost to $328 for Q1 2022. With the average American taking nearly four air trips per year (3.6, to be exact), that works out to roughly $1,200 spent on air travel annually.

Some airports are seeing larger price upticks than others, however, causing more strain on airline travelers’ pocketbooks. In this study, SmartAsset identified and ranked the airports with the largest price increases. Specifically, we looked at the 100 busiest airports in the country and compared them across three metrics: average airfare for Q1 2022, as well as the one-year percentage change and the dollar change in average airfare. We also discuss national historical trends in flights prices and ask experts about their expectations for flying costs in the future. For more details on our data sources and how we ranked airports, read the Data and Methodology section below.

In the first quarter of 2022, Westchester County Airport (which is north of New York City) had the 10th-highest average fare ($380) across all 100 airports in our study. When comparing this to a previous year, travelers are paying roughly 46% more (the highest increase in the study). In gross numbers, HPN also has the highest dollar increase in average flight price over the same one-year period ($119).

Travelers departing from the Minneapolis-St. Paul International Airport (MSP) can expect to pay an average of $376 on their one-way or round-trip, domestic flight. Compared with one year prior, the average has increased by just under $102 - fourth-worst in our study.

McGhee Tyson Airport (TYS) has the second-worst dollar increase in average airfare over the one-year period between Q1 2021 and Q1 2022 (exceeding $102). And as a result of that increase, the average price for flights leaving from TYS is fifth-highest in our study, at about $403.

The average price of an airline ticket out of Logan International Airport (BOS) ranks in the middle of the 100 airports we considered, at $340. However, BOS has the third-highest percentage increase in average flight price over a one-year period (39.62%) and the sixth-highest dollar change over the same period ($96).

In Q1 2022, the average airline ticket for flights departing from the Philadelphia International Airport (PHL) was $334, or about $96 more than the average price in Q1 2021. Over the same one-year period, the average fare for this airport has increased by nearly 41% (second-highest).

Spokane International Airport (GEG) has the 15th-highest average airfare in our study of $373. Compared to 2021, this figure is about 32% higher, representing the 17th-highest one-year percentage change in airfare cost across the 100 airports in our study.

Washington Dulles International Airport (IAD) is one of six airports included in this study where the average airfare exceeds $400. Specifically, the figure stood at $418 for Q1 2022, or about 28% higher than it was in Q1 2021. In gross numbers, the average airfare increased by $92, the ninth-highest dollar change overall.

Of the 12 California airports included in this study, Palm Springs International Airport (PSP) ranks worst for airfare increases. The average airline ticket is $360 (23rd-worst) and this airport has the 14th-highest percentage change in average prices between Q1 2021 and Q1 2022 (32.95%).

Tying as the 10th-worst airport in terms of rising costs is Dane County Regional Airport (MSN). As of Q1 2022, MSN has the second-highest average flight cost of $436. Compared to the average in Q1 2021, that is a $94 increase (seventh-highest).

While the 26% national increase in average flight costs between the Q1 2021 and Q1 2022 looks steep, rising flight costs are in part a result of depressed prices during the beginning of the COVID-19 pandemic.

The chart below shows national average airfares over the past several years. And you can see that flight prices are less elevated than one might believe. In fact, average airfare today is lower than it was in the seven years leading up to 2020.

This is not to say, however, that flight prices won't rise more as the busiest air travel months of 2022 are still to come. We had an expert to weigh in on how airfare costs may change over the next six months:

“Fuel costs are up to 30% of operational costs for the airlines, so until those prices start to level out, airfare will remain on the higher end. However, we reported recently that larger markets are seeing smaller spikes in domestic airfare prices. So, if you live in one of those larger cities - you might see less of a sticker shock than someone from a smaller city."

As consumers - especially individuals living in smaller cities - look towards buying flights around the holidays, they may need to keep an eye on prices and how costs fit into their budget.

Data for all three metrics comes from the Bureau of Transportation Statistics. We ranked each airport in every metric, giving a half-weight to average fare and a full weight to the remaining two metrics.

Anja Solum, CEPF® Anja Solum is a data journalist at SmartAsset covering a variety of personal finance topics, including retirement and debt management. Before joining SmartAsset, she worked on both agency and in-house content marketing teams where she developed her love for data analysis and visualization. In her free time, she nurtures a passion for gaming, a recent addiction to anime & KDramas, and a mischievous labrador retriever. A bit of a nomad, she’s lived in Norway, Jamaica, and Denmark in addition to the U.S. but now resides in Raleigh, North Carolina.
Share Tweet
Related Posts
Read next article