The Economics of Fast Fashion 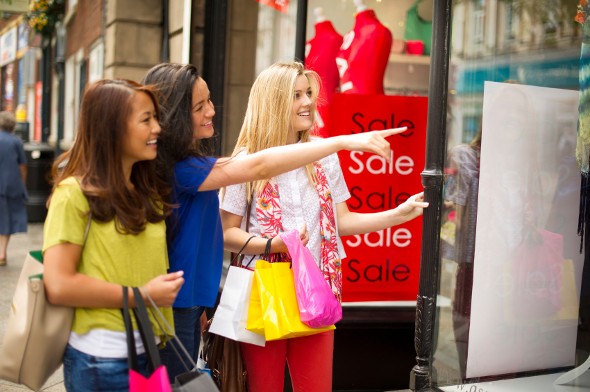 If you’ve ever popped into a clothing chain for some cheap “retail therapy” you’ve participated in the fast fashion industry. With fast fashion, clothing brands have rejected the seasonal model of dressing in favor of a near-constant stream of new designs. The clothing is sold for low prices to tempt bargain-hunting shoppers, but what’s the cost of fast fashion in terms of the economy and the environment?

What Is Fast Fashion?

The term “fast fashion” refers to the rapid turn-over of low-cost garments in the global clothing industry. These days, stores like Zara and H&M are receiving new merchandise every week. Retailers want consumers to feel drawn to novelty and to shop recreationally – and it’s working.

In her book Overdressed, Elizabeth Cline writes: “In 1930, the average American woman owned an average of nine outfits. Today, we each buy more than 60 pieces of new clothing on average per year.”

Where we once shopped seasonally for items that were built to last, we now shop on impulse. And we don’t repair our clothes like we used to. Instead, we throw them away or donate them.

It’s often said that the U.S. is a place where the luxuries are cheap and the necessities are expensive. Clothing doesn’t play a major role in Americans’ cost of living, unlike housing, education and health care. We’re spending less money for more items of clothing than ever before, enabled by the giant fast fashion industry.

Americans buy five times as much clothing now as we did in 1980. We don’t keep most of that clothing, though. According to The Atlantic, Americans send 10.5 million tons of clothing to landfills every year.

What doesn’t end up in landfills is donated, but the bulk of what’s donated isn’t sold in used clothing stores here. It’s shipped overseas in bulk. Fast fashion items bought in America often begin and end their lives in less-developed countries most Americans have never visited. 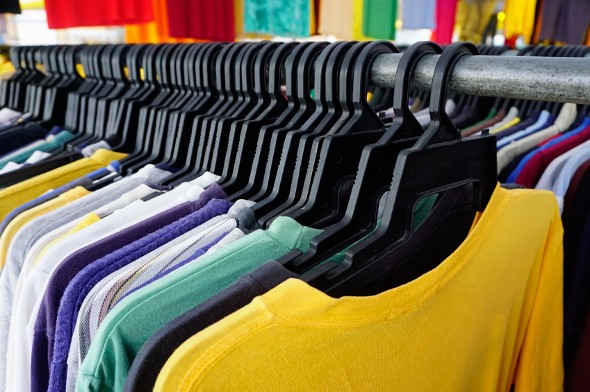 Journalist Christina Moon tracks the rise of fast fashion in the U.S. to the Jobber Market in LA’s garment district. There, immigrant garment workers began turning out rapid-fire knock-offs of high-fashion trends and other design pieces, all headed for the wholesale market.

Stores like Forever 21 could head to the Jobber Market for new designs whenever they wanted an infusion of new looks. It broke the cycle of three-month or six-month seasonality in the clothing market. These days, production of clothing bought in the U.S. largely takes place overseas, but at the same rapid pace – and for low wages.

The leader of the fast fashion industry is Zara, owned by the Inditex textile company. Zara/Inditex began life in 1963 as a dressmaker. Twelve year later, its first retail store opened in Spain.

By 1984, the company was so successful that it opened its first logistics center, a 10,000-square meter facility. The company then expanded to Portugal, the U.S. and France and began incorporating more brands.

The 1990s saw rapid expansion to other markets, including Mexico and Greece. By this time, Zara had honed its model of rapid design and production in response to trends and customer demand.

So how does a company like Zara get to to $19.7 billion? The success of the fast fashion model depends on low production costs. That’s how you end up with the low-paid workers and unsafe working conditions in the clothing industry revealed to the world when the eight-story Rana Plaza building collapsed in Bangladesh in 2013.

The deadliest garment-industry accident in history, the Rana Plaza collapse took the lives of 1,129 workers. Bangladesh’s minimum wage is just $68 per month.

Changes in trade law in the 1970s resulted in a more geographically spread-out supply chain for the clothing we buy here in the U.S. For example, in Cambodia, around 600,000 people work in the garment industry. Per capita GDP is around $1,000. The monthly minimum wage in the country is $100.

In addition to low wages, the fast fashion business model depends on speed. While fast fashion retailers stock reliable basics, their trendier items are rapidly replaced in response to fashion’s mood and customers’ thirst for novelty.

Companies like Zara may depend on producers in far-off labor markets for the production of basics, but for items they need more quickly they often turn to near-shore or even on-shore production. That’s how Zara is able to go just two to three weeks between the time an item is designed and the time it hits stores.

That short time scale leads to less unused inventory for retailers because their production is more flexible and responsive. Items reach stores when customers want the fleeting trend they represent, not months later. For an example, think about how quickly Kate Middleton’s wedding dress design was replicated in the fast fashion market.

Fast Fashion and the American Budget

Americans carry over $800 billion in credit card debt. Yet with retailers like Zara and H&M offering a constant stream of new designs, Americans are still buying a lot of clothing and it’s not taking up much of Americans’ average budget.

For comparison, the average American consumer unit spent $2,787 on meals away from home in 2014, $1,112 on vehicle insurance and $1,788 on “cash contributions.” (Cash contributions include things like alimony payments and charitable donations).

According to the American Apparel and Footwear Association, 97% of all clothing and 98% of all shoes sold in the United States is imported. Americans buy an average of 64 items of clothing and 7.5 pairs of shoes per year, but for the most part those items aren’t coming from our shores.

Though clothing manufacturing has stalled in America, the retail sector is going strong. Americans aren’t just buying clothes, we’re selling them, too. The BLS projects 10% growth in the number of retail sales workers between 2012 and 2022. In 2012 there were 4,668,300 jobs in retail sales, paying an average of $21,410 per year or
$10.29 per hour.

Fast fashion has gained enemies among those who fault the economic model for its impact on wages and the environment. One famous campaigner against fast fashion is Livia Firth, consultant, activist and wife of the actor Colin Firth. Livia Firth recently referred to fast fashion business as creating an “evil system.”

Citing the 16-hour workdays of garment workers in Bangladesh, Firth told CNN, “The fast fashion companies are like drug pushers: they go to these countries promising to lift millions out of poverty, they get the business, and then once they start production in that country they start pushing prices down.”

And it’s not just the wages that have some analysts troubled. According to some estimates, the clothing industry is second only to the oil industry as a polluter. Between the carbon emissions resulting from the production of so much clothing and the pollution from dyes and chemicals used for synthetic fabric, fast fashion is anything but green.

Part of this has to do with the prevalence of cotton in the disposable fashion industry, because cotton is one of the world’s thirstiest crops. According to ecowatch.com, it can take more than 5,000 gallons of water to manufacture a T-shirt and a pair of jeans.

Some brands have responded to the criticism of fast fashion by offering greater transparency about wages, factory conditions and the environmental impact of the clothing they sell.

One pioneer in this space is Everlane, the online-only retail company that offers what it calls “radical transparency,” with photos and locations of factories listed on the company’s website. Back in 2013, Everlane’s CEO told entrepreneur.com that the company had made $12 million and expected that number to triple in 2014.

Other companies are responding to activists’ environmental concerns. Levi’s launched a line called Water<Less™. The company says the jeans in the line use up to 96% less water in the production process and that the line had 13 million products in Levi’s spring 2012 collection, resulting in water savings of 172 million liters. Other retailers that are focusing on economic and environmental sustainability include Zady and Eileen Fisher.

Of course, many argue that the greenest clothing is used clothing. Why? Because buying used doesn’t contribute to the demand for new clothing to be produced. According to IBISWorld research, the used clothing industry in the U.S. reached $15 billion in 2015. It grew 3.3% between 2010 and 2015 and employs 237,691 people. 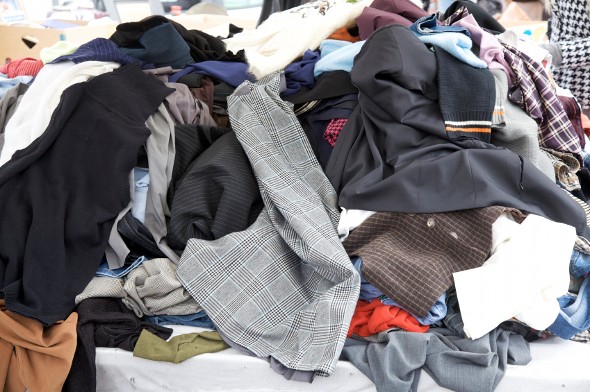 Despite its critics, fast fashion is still a strong economic performer. Zara’s customers visited the retail chain an average of 17 times in 2012. And fast fashion sales are by no means limited to brick-and-mortar locations. In the first half of 2015 alone, British fast fashion retail site boohoo.com experienced a 35% jump in revenue. A quick search for “haul videos” on YouTube shows the size of the appetite for large amounts of cheap clothing. Only time will tell whether consumer spending patterns return to the “buy more, buy better” model of the last century.

Update: Have more financial questions? SmartAsset can help. So many people reached out to us looking for tax and long-term financial planning help, we started our own matching service to help you find a financial advisor. The SmartAdvisor matching tool can help you find a person to work with to meet your needs. First you’ll answer a series of questions about your situation and goals. Then the program will narrow down your options from thousands of advisors to three fiduciaries who suit your needs. You can then read their profiles to learn more about them, interview them on the phone or in person and choose who to work with in the future. This allows you to find a good fit while the program does much of the hard work for you.