States With the Strongest Unions – 2020 Edition 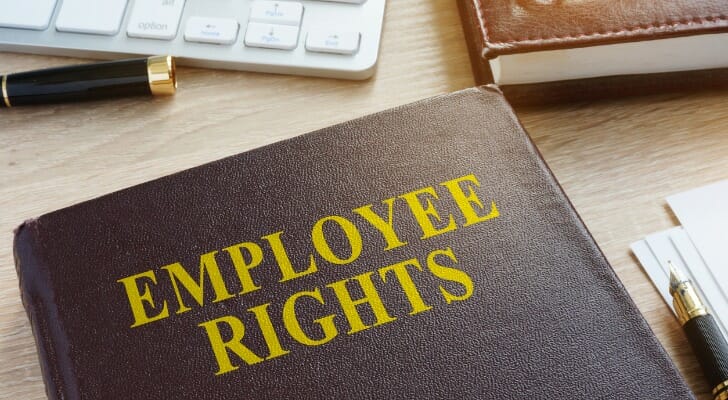 Unions can be a great way for workers to gain power in the workplace and make sure they are treated and compensated fairly. Overall, union participation rates in the U.S. are down: In 2018 the rate was 10.5%, while in 1983 it was 20.1%, according to the Bureau of Labor Statistics (BLS). Still, there are some places where unions are stronger than others. That’s why SmartAsset decided to crunch the numbers and find the states with the strongest unions.

To do so, we looked at data for all 50 states across the following eight metrics: number of union members, percentage of workers who are union members, four-year change in union membership, average annual wage for all occupations, average annual wage for middle school teachers, salary ratio of middle school teachers to all occupations, average wage for firefighters and salary ratio of firefighters to all occupations. We looked specifically at teachers and firefighters, because these two professions generally have the highest unionization rates, according to the BLS. For details on our data sources and how we put all the information together to create our final rankings, check out the Data and Methodology section below.

This is SmartAsset’s 2020 edition of our study on the states with the strongest unions. Read the 2019 edition here. 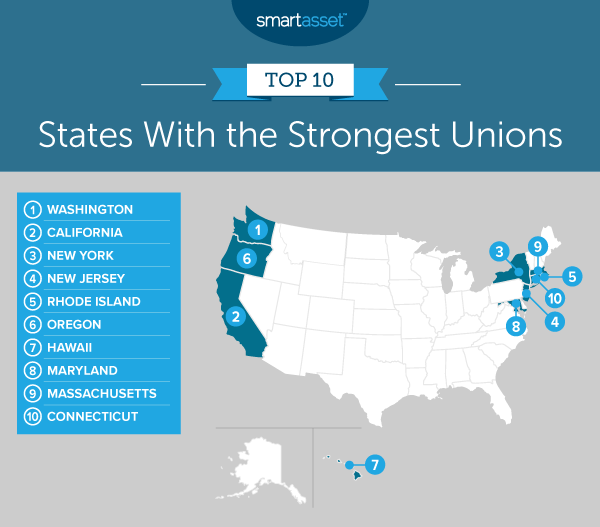 Leading the way in the study once again is Washington State, which ranks in the top six of the study for six out of the eight metrics we considered. More specifically, 18.80% of workers are in unions, the third-highest rate in this study. Washington ranks second overall for the four-year change in union membership, which increased by 27.63% from 2015 to 2019. The average annual wage for all workers in Washington is $62,020, the fourth-highest in our study.

California leads the study in terms of its total number of union members, at nearly 2.5 million. It also ranks seventh-highest for the percentage of workers in unions, at 15.14%, and first for the average wage for firefighters, at $84,370.

New Jersey firefighters have an average annual wage of $80,890 – the second-highest in the study. That figure is more than 134% of the average wage for all occupations, the third-best ratio for this metric across all states. The Garden State’s union participation rate is 15.68%, the sixth-highest in the study.

Rhode Island’s union participation rate is 17.39%, the fourth-highest rate in this study. Total union membership has gone up 20.50% in the four-year period from 2015 to 2019, the sixth-highest rate of improvement out of all 50 states. Middle school teachers in Rhode Island make $75,130 on average, and middle school teacher salaries are 131.30% of the average salary for all workers – putting the state at No. 6 and No. 4, respectively, for these metrics.

Oregon firefighters make $68,540 each year on average, the sixth-highest total earnings for firefighters in the study. That figure represents 127.19% of the average salary for all workers, which is fourth-highest in the study. Oregon also places 10th overall in terms of the percentage of workers in unions, with a rate of 14.38%.

The Aloha State has the highest union participation rate in the country, at 23.38%. Union membership has gone up 13.42% from 2015 to 2019, the 12th-highest increase in that time. Firefighters in Hawaii do fairly well for themselves, with an average annual salary of $64,110, which is 116.71% of the average worker’s salary across all occupations. That places the state eight-best and seventh-best for those two metrics, respectively.

Maryland workers do well on the whole – the average annual salary across all occupations is $60,230, the sixth-highest in the nation. The state ranks in the top 15 for the total number of union workers (more than 328,000), and it ranks in the top 20 for the percentage of workers in unions (at 11.30%).

Massachusetts workers have the highest average salary across all occupations in the nation – $65,680. The Bay State also pays teachers well, with an average salary for middle school teachers of $80,520, ranking third in this category. Nearly 12% of workers in Massachusetts are in unions, which is the 15th-highest rate for this metric in the study.

To find the states with the strongest unions, SmartAsset considered data from all 50 states across the following eight metrics: