States Where Jobs Are Most Vulnerable to Automation 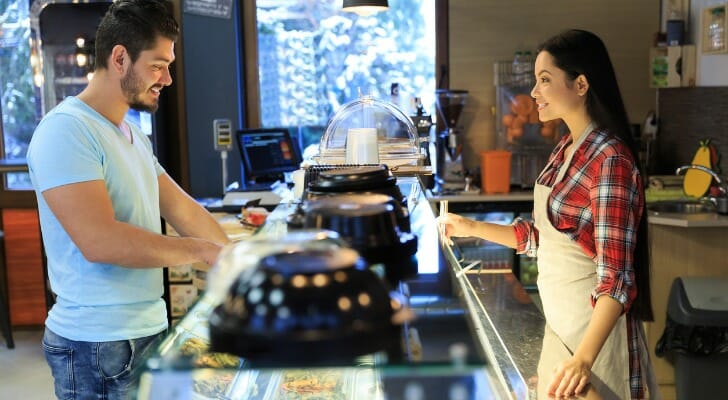 Are the robots going to steal your job or just free you up to tackle other needs at work? It’s a consideration that puts fear in the heart of the typical American employee. You see, on the positive side, labor-saving devices make workers more productive. And having more productive workers typically means goods cost less, a fact that allows consumers to build up their savings accounts. But amid that increasing productivity, labor-saving devices cause labor market upheaval, which has both positive and negative externalities.

The growth of green technology, solar technology in particular, has primed solar photovoltaic installers and wind turbine service technicians to be the two fastest-growing jobs over the next 10 years, according to Bureau of Labor Statistics (BLS) estimates. On the other hand, the BLS projects occupations like typists and watch repairers will decline dramatically as technology advances. More concerning than just the loss of specific jobs is how densely packed those occupations susceptible to automation are in certain states. A high concentration of those jobs in your neck of the woods could portend a crisis in your local economy. Below we look at BLS data and other research to determine the states where jobs are most vulnerable to automation.

In order to rank the states most vulnerable to automation, we looked at two factors. We looked at the number of people working in different occupations and examined the risk of automation in each occupation. To see where we got our data and how we put it together to create our final rankings, check out our data and methodology section below. 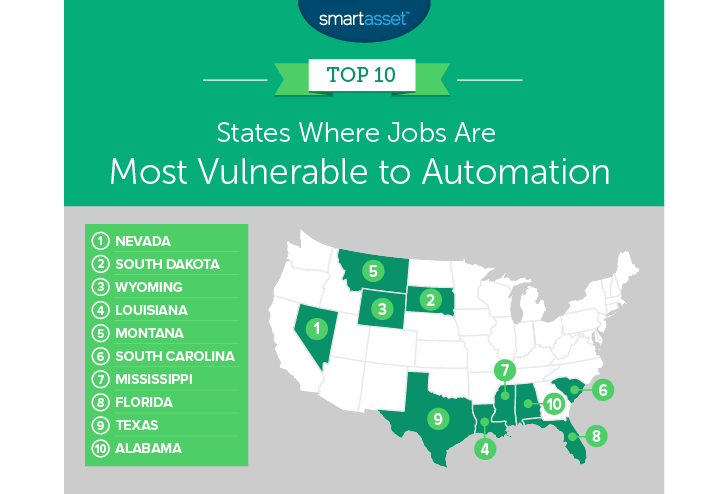 Nevada takes the top spot. We estimate that nearly three in five jobs here are at risk of automation. In total job terms, that is about 766,100 out of 1,295,000. In particular, retail salespeople face the largest risk of automation at 92%. Nevada is not unique in that its waiters, cashiers and fast food employees make up a large of chunk of the state’s vulnerable workers. But Nevada is distinct in the dominance of the gambling and hotel industry in the state’s economy. There are more than 63,000 people working as either gaming dealers, maids or bartenders, all of whom face a greater than 65% chance of being automated.

According to our estimates, just over 58% of jobs are at risk in South Dakota. Like in Nevada, retail salesperson is the job with the largest potential job loss. In total, there are 16,100 retail sales people in South Dakota, and our data shows this occupation faces a 92% chance of automation. South Dakota also contains a large number of trailer truck drivers and freight stock and material movers, two jobs with significant risk of automation. In total, the jobs at risk equal nearly $8 billion worth of income.

Louisiana comes in fourth. We estimate that roughly 1,048,000 jobs are at risk of automation here. That’s roughly 56% of the 1,874,680 jobs we analyzed. The occupation with the most jobs at risk is cashiers. There are 70,510 cashiers in Louisiana and our research estimates cashiers have a 97% chance of being automated in the future. Cashiers are one example of an occupation where the average person can see the change before their very eyes. Self-checkout machines in pharmacies and supermarkets have become increasingly prevalent over the past few years.

Another Southern state comes in sixth. Just over 1.1 million jobs are at risk of automation in the Palmetto State, according to our research. That leaves just over 55% of jobs at risk, based on BLS data. Two jobs that are at a low risk of automation here are general and operations managers and police officers. Between those two jobs alone, about 44,000 people are employed.

Mississippi comes in seventh. This state has large numbers of retail salespeople, cashiers and hand laborers and material movers, three jobs that face a high risk of automation. Those three occupations alone employ nearly 100,000 people. In total, we estimate just over 55% of jobs in South Carolina face risk of automation.

One of the largest states in the union, Florida also faces severe risk of automation. We estimate that about 4.6 million of the roughly 8.4 million jobs in Florida are at risk of being automated. That translates to almost exactly 55%. If you multiply those jobs by their average annual income, that equals nearly $158 billion in annual income lost. Workers at risk of automation may want to look into becoming police officers, licensed vocational nurses or childcare workers. Those three jobs are plentiful in Florida and face a less than 10% chance of being automated, according to our research.

The state with the second-most workers in the country is also the state with the ninth-largest percent of jobs at risk of automation. The top-three occupations with the most jobs at risk are retail salesperson, fast food preparers and general office clerks. In just those three occupations, a million jobs are at risk of automation. We estimate automation will result in the loss of nearly $239 billion in income for those workers.

In order to find the states where jobs are most vulnerable to automation, we looked at data for all 50 states and Washington, D.C. Specifically, we compared them across the following two metrics: