Occupations With the Largest and Smallest Income Growth 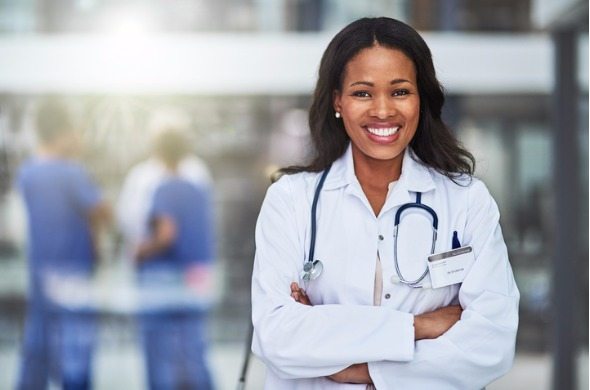 People advise you to do what you love. But sometimes doing what you love doesn’t pay your mortgage bills. Of course, it’s possible to combine your interests with a career with solid earning potential. With that in mind, SmartAsset took a look at the occupations with the largest and smallest income growth in the United States.

Trying to save? Find the best high interest saving accounts.

In order to find the occupations with the largest and smallest income growth, we collected income data from 2012 and 2016. To see where we got our data and how we put it together, check out our data and methodology section below.

Occupations With the Largest Income Growth 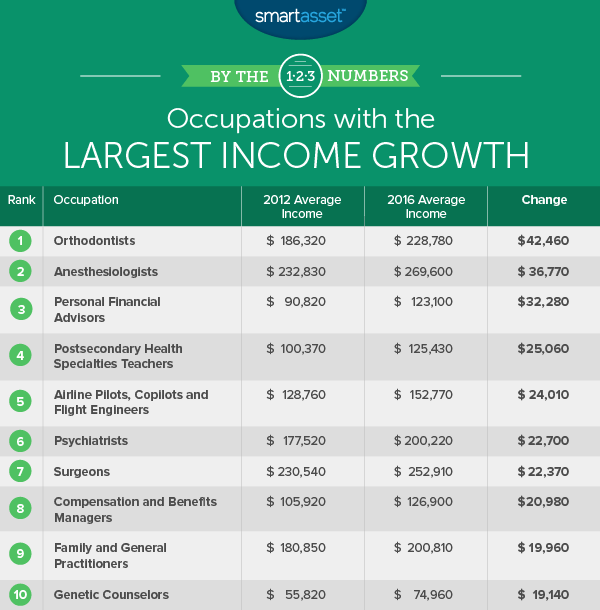 Orthodontist saw incomes rise by over $42,000, on average, from 2012 to 2016. In 2016, the average orthodontist earned over $228,000 per year. The caveat is that becoming an orthodontist is relatively difficult. You must attend dental school before specializing in orthodontics, which means many years of hard study and probably lots of student debt.

Anesthesiologists have seen similar growth as orthodontists. From 2012 to 2016, the average anesthesiologist went from earning $232,000 to $269,000 – an increase of $36,700. Of course, not just anyone is allowed to put people to sleep before an operation. This occupation requires a medical degree.

Consider this occupation alongside orthodontists and you can see that dental health is big business in the U.S. Postsecondary health specialties teachers are the people tasked with teaching dentistry, public health and medicine, among other disciplines.

The average worker in this occupation earned $25,000 more in 2016 than in 2012. This occupation has also seen the largest growth in employment our top 10. The number of employed postsecondary health specialties teachers grew by 34,600 from 2012 to 2016.

Many people dream of being pilots when they are young. Hopefully many people stuck with those dreams because it’s a great job to have. Our data shows that the average airline pilot’s salary rose by $24,000 from 2012 to 2016. To work for a major airline in the U.S., you will need a bachelor’s degree plus a pilot’s license.

Another medical occupation takes sixth. Psychiatrists saw their incomes boosted by an average of $22,700 from 2012 to 2016.

While psychiatry is not an enormously popular occupation, it is growing. Bureau of Labor Statistics (BLS) occupation outlook data shows that the number of psychiatrists is expected to grow by about 13% from 2016 – 2026.

The number of surgeons in America declined from 42,400 to 41,100 over the five-year period we analyzed. However according to BLS projections, the number of physicians and surgeons is expected to grow about 15% from 2016 – 2026.

But working in this occupation has been paying off. The average compensation and benefits manager earned over just under $127,000 per year. That is an increase of $21,000 from 2012.

Medical professionals are certainly well compensated. General practitioners are the doctors you see for your annual checkup and for routine treatment. On average, Americans in this professional earn over $200,000 per year. That’s up by $20,000 from 2012.

Genetic counselors assess the risks for families or individuals from a variety of inherited conditions, like birth defects. This occupation is slightly easier to get than other medical professions, requiring only a master’s degree.

Occupations With the Smallest Income Growth 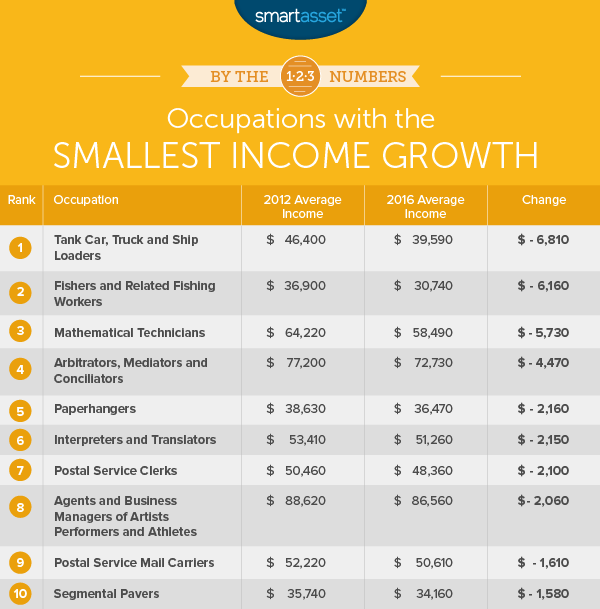 These are the people who unload shipped goods from either trucks or ships. In general this group is not particularly well paid and the situation is getting worse for them.

Unfortunately for mathematical technicians they likely earned less in 2016 than they did in 2012. This occupation’s median income dropped by $5,700 over that five-year period. That is a significant amount for a group who made $58,490 per year in 2016, on average.

Average incomes for arbitrators, mediators and conciliators dropped from 2012 to 2016, by about $4,400. At the same time the number of people employed in this occupation held mostly steady dropping by 220 from 6,520 to 6,300.

As the demand for decorative wallpaper falls, so does paperhangers’ salaries. From 2012 to 2016, average incomes for paperhangers dropped $2,100. That’s a significant amount, especially when you consider paperhangers earn $36,000 per year, on average.

There are over 82,000 postal service clerks in the U.S. They are the people who help us get our mail ready for delivery and sell us postage stamps. The bad news for them is that from 2012 to 2016 their incomes dropped by an average of $2,100.

Another thing to be concerned about is the BLS projections for employment for postal service workers. The BLS projects a 13% decline in the number of postal workers from 2016 – 2026.

8. Agents and Business Managers of Artists, Performers and Athletes

Agents for artists, performers and athletes saw their median incomes drop but they still earned more than many other occupations on this list. On average they earned over $86,000 in 2016, a drop of $2,000 from 2012.

If you do want to be an agent, BLS data suggests you will need a bachelor’s degree and less than five years of experience.

However this occupation is currently growing and is a high-paying career option for people without a college degree. BLS data shows that you only need a high school degree to become a postal service mail carrier.

Segmental pavers work in home improvement. They install flat surfaces of brick or concrete to be used as pathways to homes. Working as a segmental paver does not pay particularly well and the median pay is trending down.

We ranked the occupations according to which had the largest increase in income from 2012 to 2016 and also which had the smallest income growth. For clarity’s sake we did not include any occupation with unclear occupation titles in our final analysis. For example occupations classified as “other” were omitted.

Switching careers can be a great way to increase long-term income. Here are some tips for knowing if you’re ready to switch and how to make the transition from one career to another as smooth as possible.