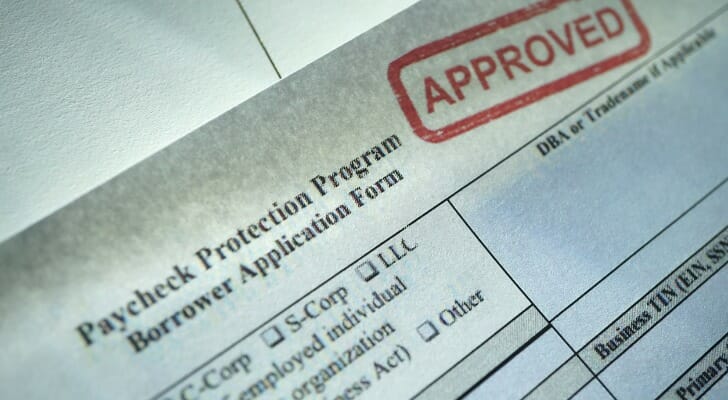 With many small businesses struggling to maintain their financial reserves during COVID-19, Bank of America, JPMorgan Chase and Wells Fargo were the U.S. lenders that originated the highest number of Paycheck Protection Program (PPP) loans. Between the first week of April and the end of June 2020, the three banks originated more than 789,600 PPP loans of the total 4.8 million that were distributed. Bank of America took the lead, originating almost 334,700 PPP loans in that time, or roughly 7% of the total number apportioned. Though those banks were the most popular according to the number of PPP loans originated nationally, other lenders took the top spot in different states around the country.

Using data published by the Small Business Administration (SBA) in coordination with the Treasury Department, SmartAsset identified the most popular PPP loan lender in each state. From there, we determined the states where the highest number of PPP loans were originated by a single lender, i.e. where the most popular PPP lender made up the largest percentage of total loans originated. For details on our data sources and how we put all the information together to create our final rankings, check out the Data and Methodology section below. 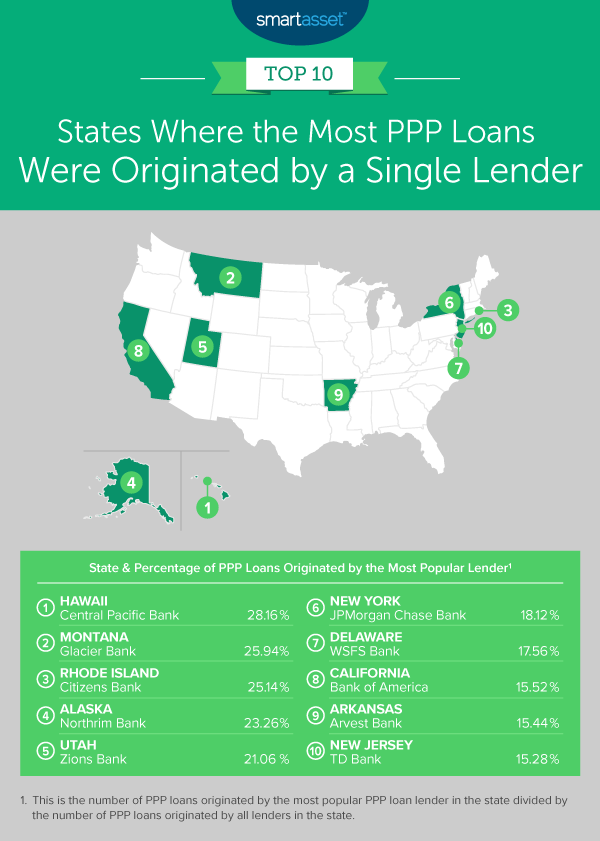 Almost 26% of PPP loans in Montana were originated by Glacier Bank, headquartered in Kalispell, Montana. Specifically, of the roughly 23,100 PPP loans allotted to small businesses in the state, Glacier Bank originated close to 6,000.

About 200 lenders in Rhode Island participated in PPP loan distribution. Citizens Bank was the most popular PPP loan lender of that total, despite only accepting applications from existing customers. Citizens Bank originated more than 4,300 PPP loans between the first week of April and the end of June.

Though Zions Bank serves 10 states throughout the West and Southwest, it is headquartered in Utah. Accepting PPP loan applications from both existing and new customers, Zions Bank originated close to 10,700 loans from the time the program started in April through the end of June. This represents 21.06% of all PPP loans for small businesses in the state of Utah.

Close to 18% of PPP loans distributed to businesses in the state of Delaware came from Wilmington Savings Fund Society Bank, otherwise known as WSFS Bank. WSFS Bank originated roughly 2,200 PPP loans between the beginning of April and the end of June. Only about 12,500 were originated in the state overall.

Bank of America may be a good banking option for individuals as well as businesses. It ranks as one of our best banks in 2020.

Arvest Bank has a large presence in the states of Arkansas, Kansas, Missouri and Oklahoma. More than 15% of PPP loans given to Arkansas businesses were originated by Arvest Bank. About 91% of Arvest Bank’s PPP loans were for amounts of less than $150,000.

The most popular PPP loan lender in New Jersey was TD Bank. Over the first three months of the Paycheck Protection Program, TD Bank originated about 19,700 loans that were for less than $150,000 to small businesses and close to 2,800 PPP loans that were for $150,000 or more.