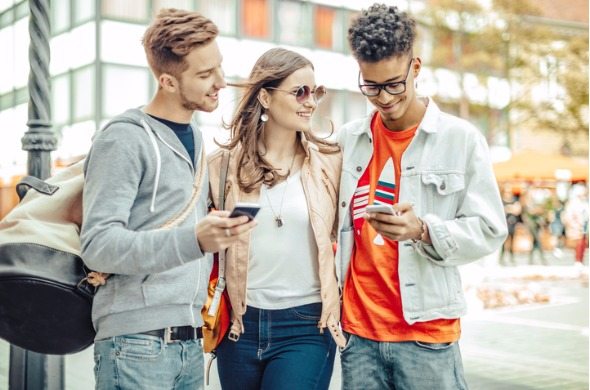 Whether it’s $14 avocado toasts, $5 lattes or $1,000 iPhone Xs, millennials have become the punchline of many jokes for their alleged profligacy. But is this reputation earned? SmartAsset gathered spending data to analyze millennial money habits. Read on as we discover how single male and female millennials spend their money.

Not sure what to do with your savings? Check out high-interest savings accounts.

In order to find out what male and female millennials spend money on, we examined spending data across a broad range of categories. We compared male and female millennials’ spending on essentials like housing and food and non-essentials like entertainment. For this study, we defined “millennials” as persons ages 25 to 34. Check out our data and methodology section below to see where we got our data and how we put it together. 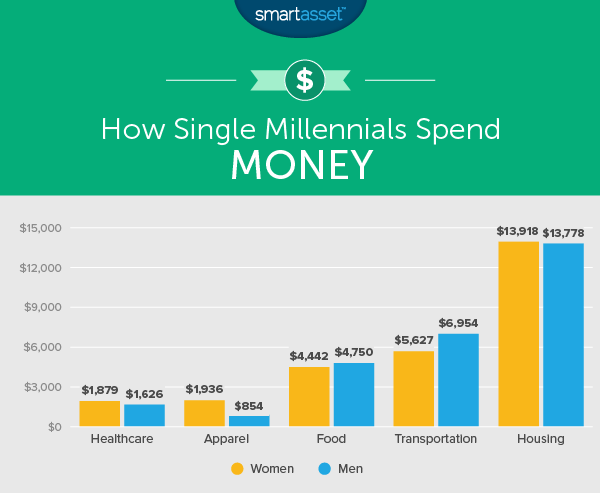 The data also corroborated previous research which showed millennials are less likely to be homeowners than other generations. In this data set about 81% of men and 78% of women were renters. 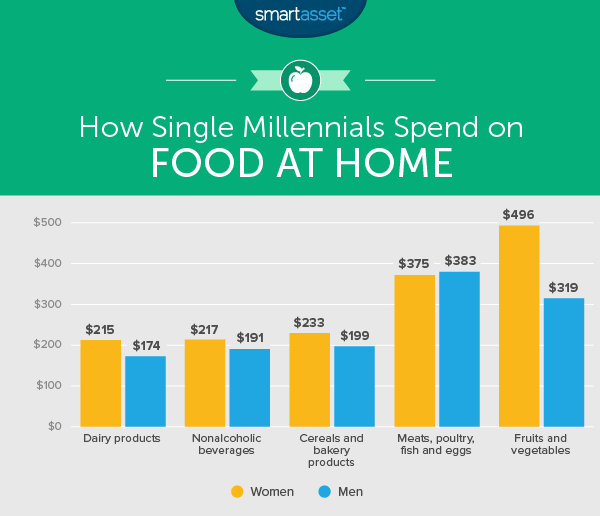 Data on food suggests there may be a nugget of truth to the idea that millennials could use some budgeting help. According to our data, single millennial men and women both spend the majority of their food budgets on eating out. Overall, women spend about $2,300 per year on food away from home while men spend just over $3,000. For women that means about 52% of their food budget is spent on eating out, while for men that figure is 64%.

What about when it comes to money spent on eating at home? Millennials seem to be eating balanced diets. Men eat slightly more meat, poultry, fish and eggs, while women eat more fruits and vegetables.

Both men and women it seems could benefit from cooking classes. Our data shows that on average about 40% of what millennials spend on eating at home is spent on miscellaneous foods. This category includes items like frozen prepared meals, canned soups and snacks like potato chips or nuts. Another big ticket item for single millennials is non-alcoholic beverages. Both groups spend almost $200 per year on colas and sparkling waters. With LaCroix dominating the non-alcoholic drink aisles these days, we may see that number rise.

Millennials in general should probably save more money. It is important to start saving early so you can take advantage of compound interest and get a head start on retirement. According to our data, single millennials, both men and women, are putting away about 10% of their incomes into savings.

Many experts say that figure should be closer to 20%. This may be especially true for millennials who have several years before retirement. The sooner they put money into their 401(k)s, the sooner they’ll see the effects compound interest. Of course, just putting money into a savings account is better than spending it. 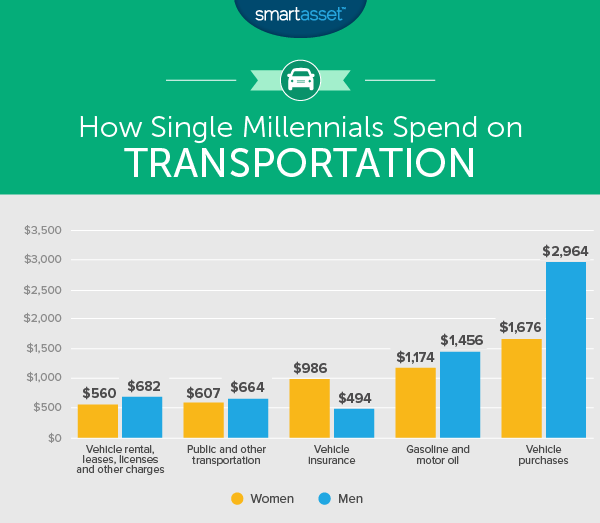 When it comes to getting around, single male millennials are more likely to spend money on buying new or used cars than females are. In fact, men spend almost twice as much as women on vehicle purchases ($1,670 per year compared to $2,900 per year, on average).

Do women prioritize their education more than men? Perhaps. We found that on average single female millennials spend almost 4.5% of their budget on education while their male counterparts spend only 2.7%. 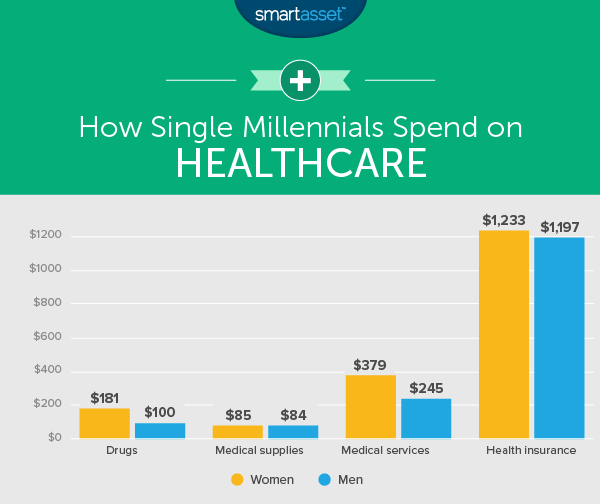 According to BLS data, single female millennials spend an average of $1,800 per year on healthcare costs. Single male millennials, on the other hand, spend $1,600 on average. For both groups healthcare spending takes up only about 4.5% of their overall budgets.

Women tend to spend slightly more across all healthcare categories. The largest difference comes in drugs and medical services, which includes things like X-rays and doctor’s appointments. Women spend just over $200 per year more than men in those two items. 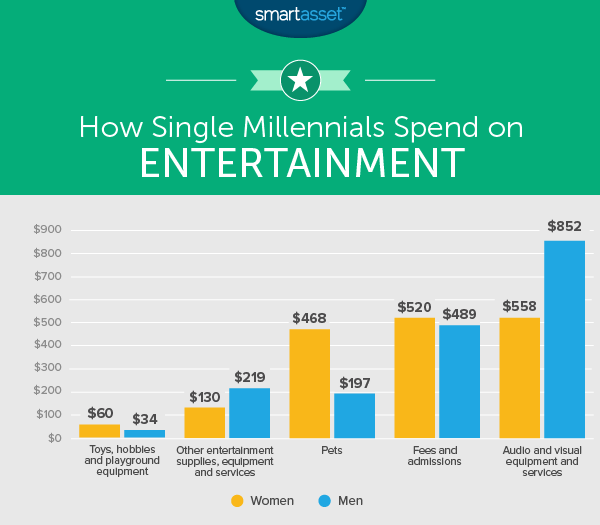 This category perhaps best illustrates that millennials are more frugal than many people give them credit for. Both male and female single millennials spend an average of $1,700 per year on entertainment. This category includes money spent on attending sporting events and concerts and buying  audio and visual equipment like headphones or a new TV.

There is a notable difference in how men and women spend on entertainment. Men are more likely to spend money on audio and visual equipment compared to women. The average single male millennial spends around $850 on this category – which notably includes video games – per year. In comparison women spend $550, on average, in that category.

The Bureau of Labor statistics, somewhat oddly, classifies spending on pets under the “entertainment spending” category. This is one subset where millennial woman outspend men. On average single millennial women spend $260 more per year on pets than men do.

Men could probably spend a bit less on alcohol. Our data shows that the average single male millennial spends almost 2.5%, or $915 of his annual budget on alcoholic beverages. Women, on the other hand, spend an average of $500.

In terms of tobacco consumption neither male nor female single millennials spend much. For both groups tobacco represents less than 1% of their budgets. Although on average men are slightly more likely to consume tobacco. Men spend about $110 more per year on tobacco than women.

Women’s savings from food and alcohol tend to go toward shopping. The average millennial woman spends almost $2,000 per year on her wardrobe, or almost 5% of her annual budget. For the average man that same figure is only $854, or almost 2.5% of his annual budget.

Single female millennials vastly outspend men on personal care products and services. On average, women spend around $714 in this category while men spend about $297.

Although this is not a particularly large spending category for either group. For women it makes up only 1.8% of their budget and 0.7% for men.

In order to examine millennial money habits, SmartAsset analyzed data for both single men and women between the ages of 25 and 34. Data comes from the 2016 Bureau of Labor Statistics Consumer Expenditure Survey. We compared male and female millennials across all categories in terms of total dollars spent as well as percent of budget spent. Because men on average earn more than women, comparing across percent of budget spent allowed us to create a comparable metric.

One takeaway from this article is that the average millennial should save more money. While 10% isn’t bad, 20% is better. Here are two tips for millennials looking to save.

First, look for places where you can cut back in your budget. Our data showed average millennials spend around 36% of their budgets on housing. It might be possible to get that number closer to 30% by moving in with a roommate. In some cities, living with a roommate saves thousands of dollars a year.

Another simple way to save is to make the most out of your spending. If you’re passionate about travel and you prioritize spending in this area, you could benefit from using the right travel credit card. By using credit cards that earn points with airlines or hotels, you could potentially save hundreds of dollars per year.