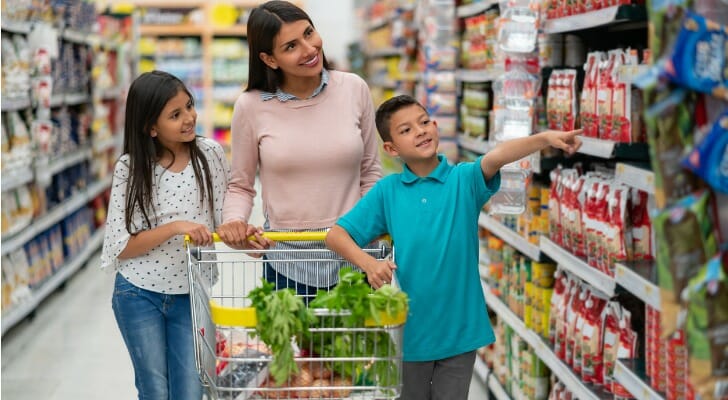 As people age, their spending and saving patterns change. Major life events like buying a home, getting married or having kids may impact not only the rate at which people save, but also how they allocate the money that they do spend. Generational cohorts have also demonstrated differences in their financial priorities. For instance, a report from the Urban Institute found that in 2018, millennial homeownership rates were approximately eight percentage points lower than the homeownership rates of Generation Xers and baby boomers when they were the same age (21 to 37 years old).

In this study, we looked at how different generations spend money. Using data from the Bureau of Labor Statistics’ 2018 Consumer Expenditure report, we considered the three largest living generations in the United States – millennials (born 1981-1996), Generation X (born 1965-1980) and baby boomers (born 1946-1964) – and their spending according to 11 major categories. We grouped spending by needs and wants, defining housing, utilities & housekeeping, food, healthcare and transportation as needs and apparel & personal care products, entertainment, reading & education and alcohol & tobacco as wants. We additionally considered other spending on personal insurance and pensions along with miscellaneous expenses. Below, we discuss similarities and differences in 2018 spending across generations for those 11 major categories. 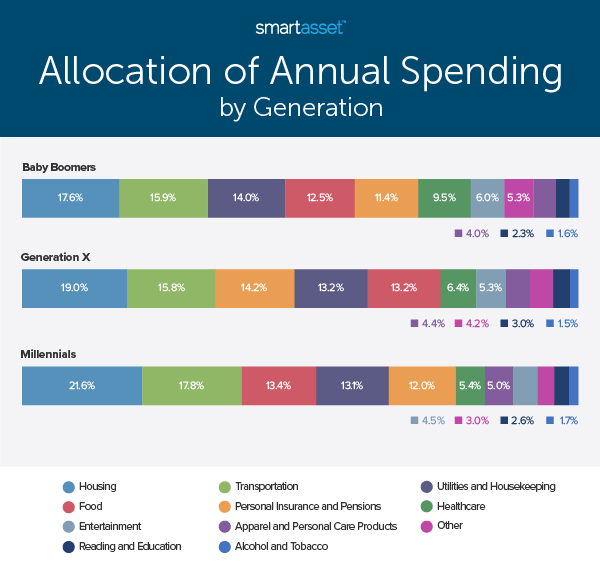 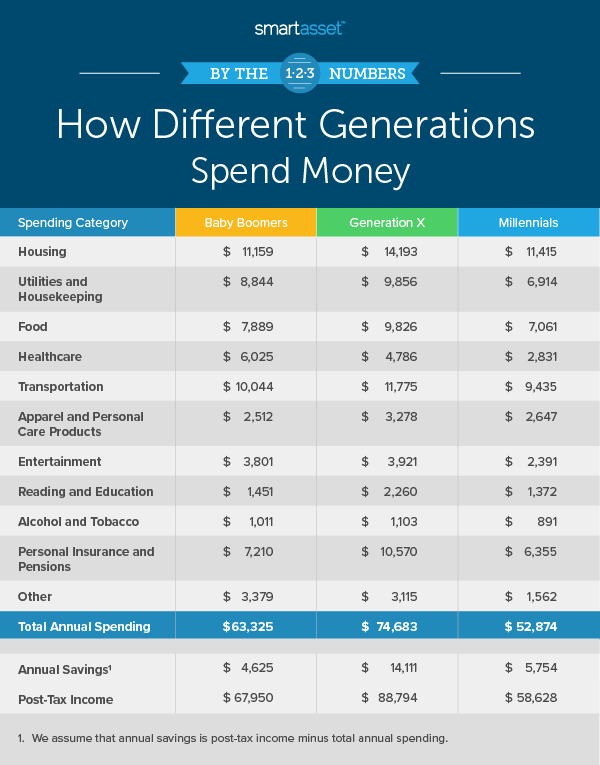 Millennials are less likely to be homeowners than Gen Xers and baby boomers. Census Bureau data shows that the under-35 homeownership rate was 33.7% in 2018 compared to the national average of almost 67%. Percentage-wise, millennials dedicate more of their annual spending to housing than any other generation does. Housing makes up almost 22% of annual expenditures for millennials relative to about 19% for Gen Xers and 17.6% for baby boomers. In gross terms, millennials and baby boomers both spend slightly more than $11,000 annually on housing, while Generation Xers spend about $14,200.

As a percentage of annual expenditures, spending on food generally increases as we look at the spending habits of successively younger generations. Of the three generations for which we considered data, millennials dedicate the most of their annual spending towards food, at 13.4%, while baby boomers allocate the least, at 12.5%. Though Gen Xers fall between millennials and baby boomers when comparing food spending to overall spending, they spend the most in gross terms, an average of almost $10,000 per year.

Though we categorized food as a need, eating out in particular may be considered a want. The BLS Consumer Expenditure Survey distinguishes between spending on food at home and food away from home. Food away from home includes all meals including tips at fast food restaurants, cafeterias and full-service restaurants along with take-out and delivery. Perhaps expectedly and potentially driving up higher food spending percentages, millennials tend to spend more on eating out than Gen Xers and baby boomers, according to the data. Almost half of food spending for millennials goes towards food away from home, 47.3%, while baby boomers allocate only 41.7% of their total food spending to eating out.

As people age, the incidence of health conditions tends to rise. Unsurprisingly, healthcare spending, which includes health insurance, medical services, drugs and medical supplies, also increases as we look at data for older age groups. Across generations, from millennials to baby boomers, healthcare spending grows in both gross terms and as a percentage of annual spending. Millennials and Gen Xers spend averages of $2,831 and $4,786, respectively, on healthcare, which map to 5.4% and 6.4% of their total spending. Baby boomers, not all of whom were yet eligible for Medicare in 2018, spent the most – $6,025, or about 9.5% as a percentage of their total spending. Healthcare has the widest range of spending by generation, 4.1%, surpassing housing which has a range of 4.0%. 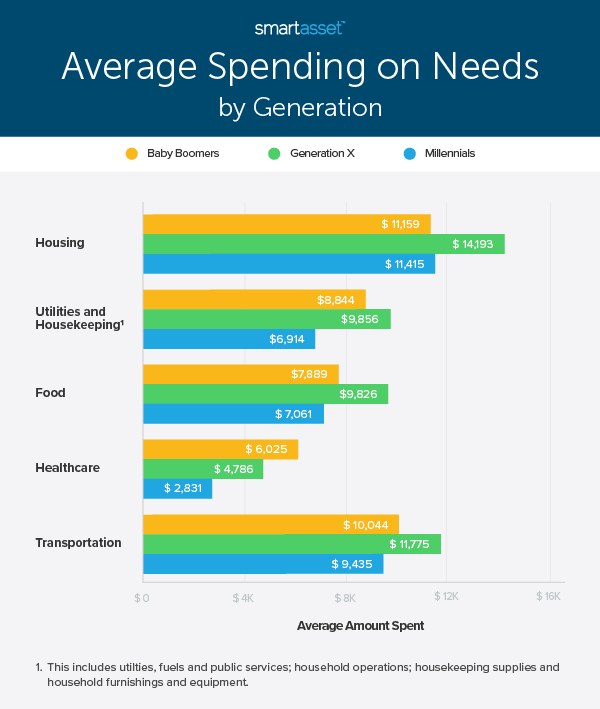 Though spending may be significantly higher for some Americans given the rising costs of higher education in the U.S., the average American spent between $1,300 and $2,400 on reading and education in 2018. As a percentage of total spending, millennials, Gen Xers and baby boomers allocated between 2% and 3% of their annual spending to reading and education. Gen Xers spent the most in gross terms, $2,260, and as a percentage of spending, 3.0%.

In gross terms, millennials spend about $200 less annually on alcohol, tobacco products and smoking supplies than Gen Xers do and about $100 less than baby boomers do. However, as a percentage of spending, Gen Xers allocate the least, about 1.5%, compared to 1.7% by millennials and 1.6% by baby boomers. In fact, alcohol and tobacco spending is the only category of the 11 we looked at for which Gen Xers allocate the least of their spending of the three generations. 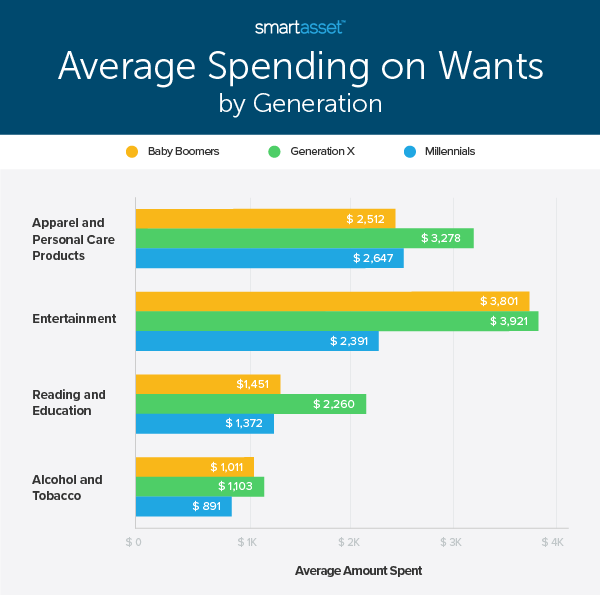 The remaining spending for each generation falls under the two BLS categories of cash contributions – cash contributed to persons or organizations outside of the consumer unit – and miscellaneous – which includes several subcategories such as bank service charges and credit card memberships. Baby Boomers have both the largest gross amount, $3,379, as well as percentage of their spending in this category of the three generations, at 5.3%.

We estimated the average annual savings for each generation by subtracting total annual spending in the 11 defined categories from post-tax income. In 2018, baby boomers saved the least in gross terms of all three generations, $4,625, and Gen Xers saved the most, $14,111. Baby boomers had the lowest savings rate of about 6.8% while Gen Xers had the highest, 15.9%. Millennials fell in the middle with a savings rate of 9.8%.

Data for this report comes from the Bureau of Labor Statistics’ 2018 Consumer Expenditures Survey. All reported figures are averages per consumer unit. Consumer units include families, single persons living alone, single persons sharing a household with others while also remaining financially independent or two of more persons living together who share major expenses. The BLS measures the variability of average expenditures by calculating a coefficient of variation, which is the standard error divided by the mean expenditure and is expressed as a percentage. Per BLS recommendations, we did not rely on estimated averages with a coefficient of variation greater than 25.

Tips for Budgeting and Saving