The Happiest Places in America – 2019 Edition 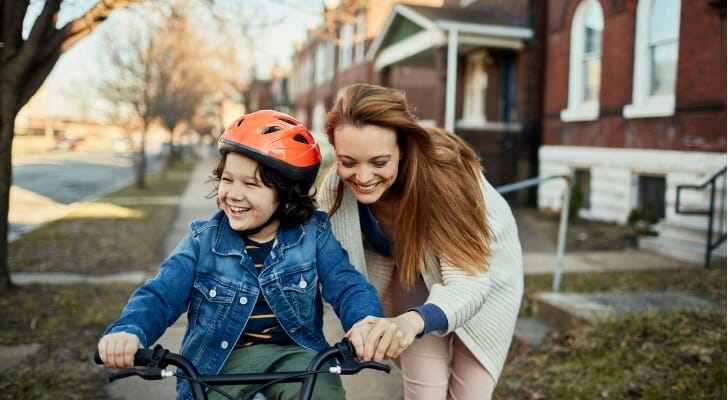 The U.S. is the 19th-happiest country in the world, according to the 2019 World Happiness Report that the Sustainable Development Solutions Network for the UN released. Though this is a one-spot drop since last year, there are still plenty of places to find happiness in America. We looked within the U.S. to determine which counties are the happiest. Money, of course, doesn’t buy happiness, so those places gracing the top 10 don’t necessarily have the residents with the largest savings accounts. Rather, these places stand out due to a number of factors related to physical and financial health as well as family stability.

To determine the happiest places in America, we compared 980 counties across the U.S. with populations of at least 50,000. We looked at eight different metrics, including unemployment rate, poverty rate, affordability ratio, marriage rate, divorce rate, bankruptcy rate, life expectancy and physical activity rate. The counties are ranked based on their performance in each of the eight metrics. For a more complete explanation of how we ultimately ranked the counties, read our Data and Methodology section below. 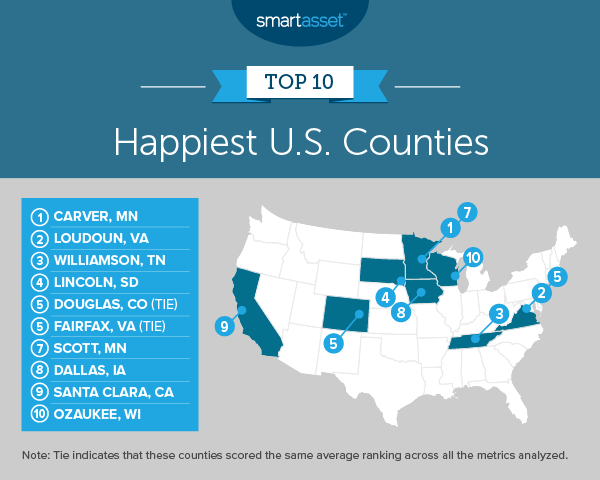 Carver County, Minnesota ranks as the happiest place in America according to our data. This is the second consecutive year that Carver County has topped our list. The previous three years, it ranked in the top 5.

In Carver County, 83.90% of residents get at least some recommended physical activity. This is the third-highest percentage of any county in the top 10. Carver County also stands out for its high marriage rates and low divorce rates. Approximately 62.20% of residents are married, and only 7.90% are divorced.

Loudoun County, Virginia moved up a spot from our 2018 list to claim the title of the second-happiest place in America this year. The county has a low poverty rate, with only 3.70% of residents living below the poverty line. Employment opportunities are also robust in Loudoun County: Just 2.48% of residents are unemployed.

Williamson County, Tennessee jumped two spots from last year’s list to claim the third spot. And in 2017, it didn’t even crack the top 10. Its climb in the ranks as one of the happiest places in America is perhaps in some part due to its high income-to-cost-of-living ratio, which is the highest of any county in our top 10.

The county in Tennessee also stands out for its marriage rate. According to our data, 65.30% of residents in Williamson County are married, which is the highest marriage rate of any county in the top 10.

Residents aren’t as active in Lincoln County as they are in many other counties in the top 10, though. Only 80.10% of residents get some physical activity, which is the third-lowest percentage in our top 10.

Douglas County, Colorado has the second-highest income-to-cost-of-living ratio of any county in our top 10. The average household in the Colorado county earns nearly four times the amount necessary to cover the basic costs of living. Douglas County also has the highest level of physical activity compared to other top 10 cities. According to our data, 89.70% of residents get some level of physical activity.

On the downside, finding a job may be tougher here. The county has the highest unemployment rate in our top 10, with 2.81% of residents unemployed. It also has the highest divorce rate, at 9.20%.

Tied for fifth place with those in Douglas County, Colorado, residents of Fairfax County, Virginia live long into their retirement years. The county boasts the highest life expectancy in our top 10, with residents living an average of 83.73 years. Residents are relatively healthy, both physically and financially. About 83.30% of residents get at least some physical activity, and the personal bankruptcy rate in the county is just 0.12%.

Fairfax County could probably rank higher if it weren’t for its poverty rate, which is the second-highest of all the counties in our top 10. According to our data, 6.10% of residents in Fairfax County live below the poverty line.

This is the first time that Scott County, Minnesota has made our top 10 since we started the study in 2015. In Scott County, the average family earns more than 3.62 times the amount needed to cover basic expenses. The county has an unemployment rate of just 2.60% and roughly 94.40% of residents live above the poverty line. However, the county’s personal bankruptcy rate – nearly 0.17% – is the second-highest in the top 10.

When it comes to physical health, Scott County residents are relatively active. About 82.20% of residents get at least some physical activity. Life expectancy in the county averages around 81.95 years.

Dallas County, Iowa which tied for sixth in our 2018 study, boasts the lowest unemployment rate of any county in our top 10, at 1.77%. It also has a healthy income-to-cost-of-living ratio as well. The average family here earns more than 3.49 times the minimum amount needed to cover the cost of living in the county.

According to our data, only 78.10% of residents get at least some physical activity, which is the lowest percentage of any top-10 county.

The county has the lowest marriage rate — 53% — of any county in the top 10. It also has the highest poverty rate in the top 10, with 8.60% of residents living below the poverty line.

Ozaukee County, Wisconsin rounds out our top 10. Last year, it appeared in the sixth spot. The county has a low unemployment rate of just 2.50%, and only 5.90% of residents live below the poverty line. The average life expectancy in the county is 82.13 years.

Compared to the other counties in our top 10, this county has the highest personal bankruptcy rate, 0.18%. It also has the second-highest divorce rate. About 8.70% of residents here have gotten divorced. 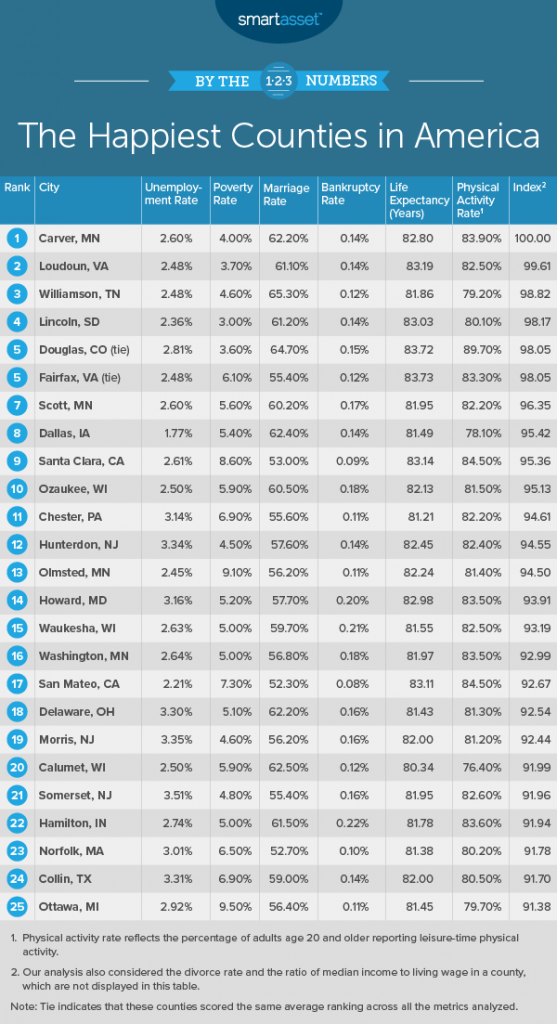 To determine the happiest places in America, we analyzed data from 980 counties across the U.S. We exclusively looked at counties with populations of at least 50,000. Population data came from the Census Bureau American Community Survey. We compared these counties across the following eight metrics:

To create our rankings, we first evaluated every county in each of the above metrics. Then we gave each county an average ranking based on its performance in each of the eight metrics. We gave each metric equal weight. Using the average ranking, we gave each county an index score between 0 and 100. The highest-ranking county received a score of 100, while the lowest-ranking county received a score of 0.

Becca Stanek, CEPF® Becca Stanek is a graduate of DePauw University. Becca is an experienced writer/editor who serves as a retirement expert for SmartAsset. She's passionate about helping people understand the sometimes daunting ins and outs of personal finance. Becca is a Certified Educator in Personal Finance® (CEPF®) and a member of the Society for Advancing Business Editing and Writing. Her work has also appeared at Time, The Week, Mic and The Washington Monthly. Becca grew up in the Midwest and now lives in New York City.
Share Tweet
Related Posts
Read next article