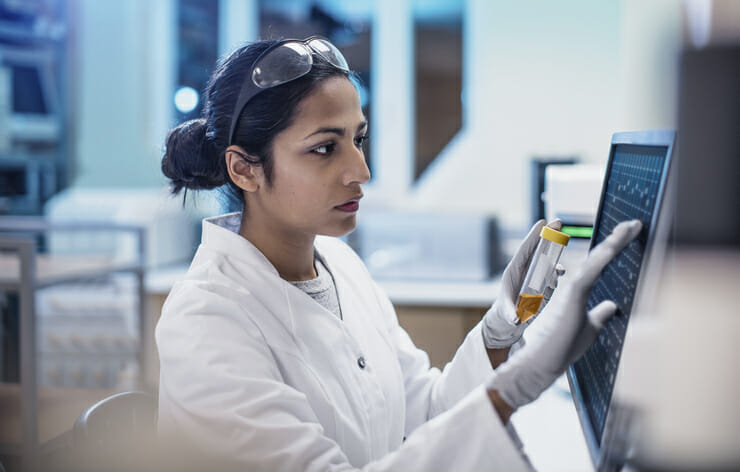 The COVID-19 pandemic has caused unprecedented job losses across many industries and occupations. However, STEM jobs have been less affected generally. The 2020 unemployment rates for all three STEM occupational categories were more than three percentage points lower than the overall rate (8.1%). Specifically, the average 2020 unemployment rates for computer & mathematical occupations, architecture & engineering occupations and life, physical & social science occupations were just 3.4%, 3.6% and 4.3%, respectively. Keeping in mind that these industries could offer more opportunities to find jobs and save money, SmartAsset identified the fastest-growing STEM occupations in 2021.

This is SmartAsset’s second annual study on the fastest-growing STEM jobs in the U.S. Check out the 2020 version here.

How Will STEM Be Affected by COVID-19 Long-Term?

Annually, the BLS publishes 10-year growth projections for all jobs in the U.S. After publishing 2019-29 projections in the fall that did not capture the effects of the pandemic, the BLS recently issued alternate scenarios that model how jobs could change if COVID-19 continues to have either a strong impact on the economy or a moderate one. Projections from the BLS show that STEM jobs may actually grow more quickly over the next 10 years than previously projected. The chart below maps pre-pandemic, moderate pandemic impact and strong pandemic impact projections for the three occupational categories of STEM jobs. 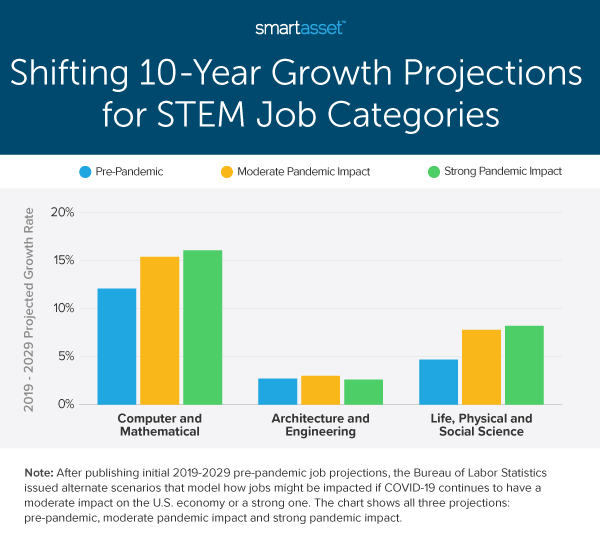 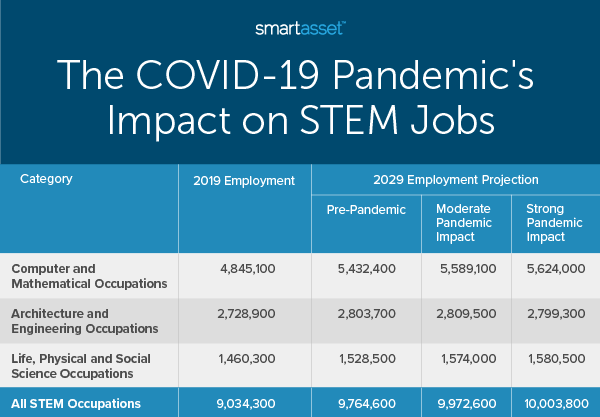 Taking into account both moderate and strong pandemic impact scenarios, the BLS predicts that in total there will be close to 1 million more STEM jobs in 2029 than there were in 2019. For a comparison, the BLS previously projected that the number of STEM jobs would have increased by about 730,400 from 2019 to 2029.

Statisticians, computer user support specialists, computer & information research scientists, computer system analysts, operations research analysts and actuaries are the other six computer & mathematical occupations ranking in our top 10. From 2015 to 2019, statisticians had the greatest percentage growth out of the six (about 31%), while computer user support specialists had the largest gross increase (almost 62,300 workers). The BLS predicts that over the next 10 years, the occupation of computer support specialist will continue to overtake computer systems analyst. It is expected to add 58,500 workers, which is the greatest 10-year expected growth in number of workers overall.

Industrial engineers are the only architecture & engineering occupation in our top 10 fastest-growing STEM jobs. From 2015 to 2019, the occupation grew roughly 44,100 workers, or 17.83%. That gross four-year change is the second highest in our study. Looking forward, the BLS expects the occupation of industrial engineer to grow by 10.9% in its moderate pandemic impact scenario. This growth would mark the addition of 32,200 new workers – the sixth-highest 10-year increase in number of workers in the study.

Our top 25 includes 10 other life, physical and social science occupations. Biological technicians and forensic science technicians rank best out of the 10. Both occupations rank in the top half for all four metrics we considered. The occupation of biological technicians ranks particularly well for its four-year growth in number of workers (6,630) and 10-year expected growth in number of workers (8,200). The forensic science technicians occupation ranks higher for the two percentage change metrics, with the 11th-highest four-year percentage employment change (17.41%) and the 10th-highest 10-year expected percentage employment growth (14.0%).

The Bureau of Labor Statistics (BLS) defines science, technology, engineering and math (STEM) occupations as including computer & mathematical, architecture & engineering, and life & physical science occupations, as well as managerial and postsecondary teaching occupations related to those functional areas and sales occupations requiring scientific or technical knowledge at the postsecondary level. For the purposes of this report, we considered only occupations falling under the first three categories.

To find which STEM jobs are growing the fastest, we compared 72 BLS-defined occupations across the following four metrics: