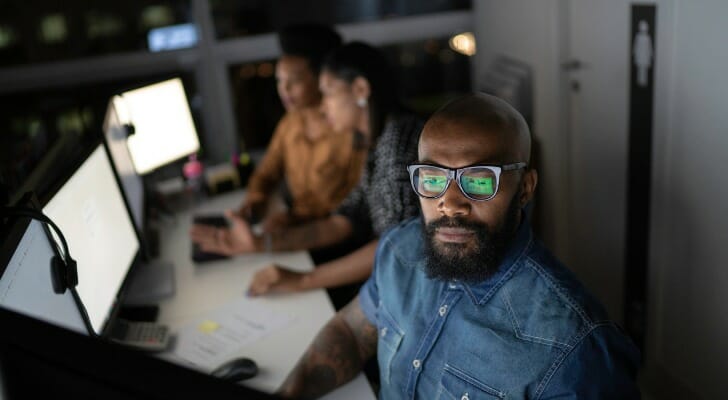 About 7.31 million Americans were employed in science, technology, engineering and math (STEM) occupations in 2018, an increase of 7.48% from 2014, when there were 6.80 million STEM workers. Those who are interested in joining this growing industry may have further opportunities to find jobs and save enough, as the Bureau of Labor Statistics (BLS) expects an uptick in most STEM occupations over the next decade. According to BLS predictions, there will be 8.05 million STEM workers in 2028.

Though most STEM jobs have grown over the past years and are expected to continue that upward trend, some specific occupations have gained more ground than others. In this study, we looked at the changing landscape of STEM and uncovered the fastest-growing STEM jobs in the U.S. For details on our data sources or how we put the information together to create our findings, check out the Data and Methodology section below. 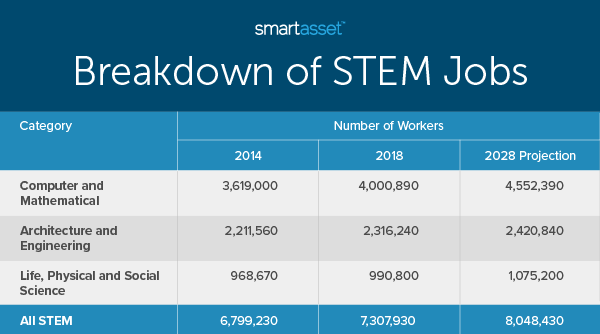 The graph below shows the distribution of STEM jobs across the three categories in 2014 and 2018 along with the predicted distribution for the year 2028. 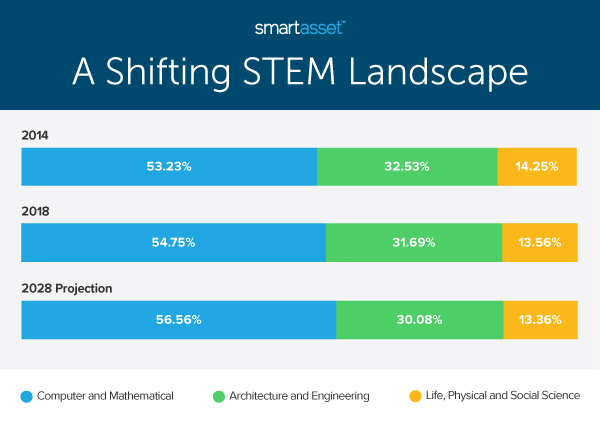 Of the 16 computer & mathematical occupations, 11 make it into our list of the top 25 fastest-growing STEM jobs and seven make it into the top eight, with application software developers taking the top spot. Applications software developers was the largest STEM occupation in 2018, employing 903,160 workers, and it is expected to grow by more than 25% over the next 10 years. The remaining six computer & mathematical occupations in the top 10% of our study include information security analysts, statisticians, operations research analysts, computer user support specialists, computer systems analysts and computer & information research scientists.

Information security analysts and statisticians rank as the No. 2 and No. 3 fastest-growing STEM occupations, respectively. Both occupations grew at a faster percentage rate than applications software developers between 2014 and 2018, but since they employ fewer workers, smaller numbers of workers joined the occupations over that time. Both occupations are additionally expected to grow by more than 30% in the next 10 years, which translates to additions of 35,500 information security analysts and 13,600 statisticians to the workforce.

Of the remaining eight computer & mathematical occupations in our top 25, we observed the following trends: Computer & information research scientists had the largest percentage growth from 2014 to 2018 (24.20%) while computer user support specialists grew by the largest number of workers during those years (67,160). Looking forward to 2028, operations research analysts are expected to grow at the highest rate over the coming years (25.60%), while the occupation of computer user support specialists is expected to have the highest addition of workers between 2018 and 2028 (almost 71,000).

Industrial engineer ranks seventh overall while architect (except landscape and naval) ties for 10th place. Over the past four years, the number of industrial engineers grew by about 18%, or the 12th-highest increase in percentage terms, and by a total of 42,560, or the fifth-highest increase in gross terms. The BLS predicts that the occupation will continue to grow over the coming years, though at a slower pace. According to their projections, the number of industrial engineers will increase by 8.30%. The projected 10-year growth is slightly higher for architects (except landscape and naval), at 8.40%.

Of the remaining four fastest-growing architecture and engineering occupations, marine engineers & naval architects had the largest percentage growth over the past four years while the occupation of civil engineers grew the most by number of workers. Between 2014 and 2018, the occupation of marine engineers & naval architects grew by almost 50%, the highest percentage growth in our study. Meanwhile, with an addition of almost 43,000 workers over the same time period, there were a total of roughly 306,000 civil engineers in the workforce in 2018.

There are also seven life, physical & social science occupations that rank in our top 25. They include medical scientists (except epidemiologists); clinical, counseling & school psychologists; social science research assistants; forensic science technicians; urban & regional planners; biological technicians and physicists. On average, those occupations grew by about 12% between 2014 and 2018 and are expected to grow by more than 10% between 2018 and 2028.

The occupation of medical scientists (not including epidemiologists) ranks the highest among life, physical and social science occupations, tying for 10th with architects (not including landscape and naval). Though the number of medical scientists in this occupation classification grew by almost 20,000 (more than 19%) between 2014 through 2018, the growth rate is expected to slow into 2028, following the trend across many STEM jobs. The BLS predicts that the occupation will grow by only about 8% over the coming 10 years, well behind many other computer & mathematical occupations.

To find which STEM jobs are growing the fastest, we compared those occupations across the following four metrics: