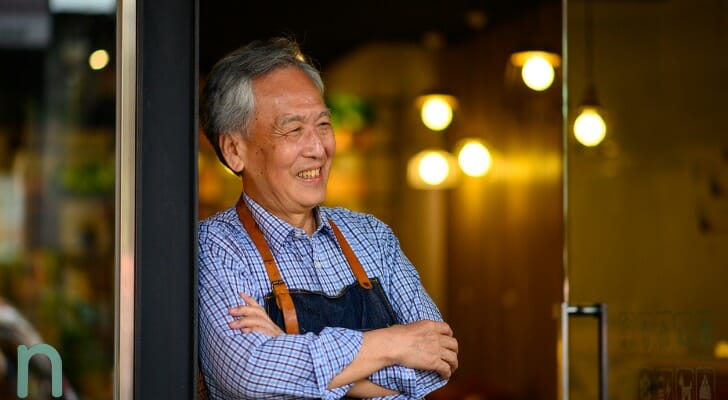 Older American workers have been disproportionately impacted by not only the health impacts of COVID-19, but also its corresponding economic shock, which has deeply affected their ability to budget and save for their retirement. In fact, workers 65 and older have seen some of the highest recent unemployment rates. A Kaiser Family Foundation analysis of April 2020 data from the Bureau of Labor Statistics (BLS) shows that the unemployment rate was highest among workers in the youngest age cohort (ages 16 to 24) – at 27.4% – and next highest among workers in the oldest age cohort (ages 65 and older) – at 15.6%.

The BLS has not yet published data on how senior employment within specific occupations has changed during COVID-19, so this study investigated the employment trends among seniors leading up to 2020. Specifically, we looked at the most popular jobs as well as fastest-growing jobs for seniors. For details on our data sources and how we put all the information together to establish our findings, check out the Data and Methodology section below.

Most Popular Jobs for Seniors

Though those occupations employ the highest gross number of seniors, seniors make up larger percentage of the workforce in a different set of jobs. BLS data shows that more than a third of models, demonstrators and product promoters are 65 or older. Specifically, of the total roughly 62,000 people employed in this occupation in 2019, about 21,000 were seniors. Average earnings for those working in this field are modest. Nationally, the average annual wage for demonstrators and product promoters in 2019 was about $35,300.

Seniors make up more than 20% of employed workers in five other jobs:

Across those five occupations, the highest gross number of employed seniors work in the clergy. In 2019, there was a total of roughly 86,000 workers in the clergy who were 65 and older. The table below ranks occupations according to the percentage of seniors employed in 2019. 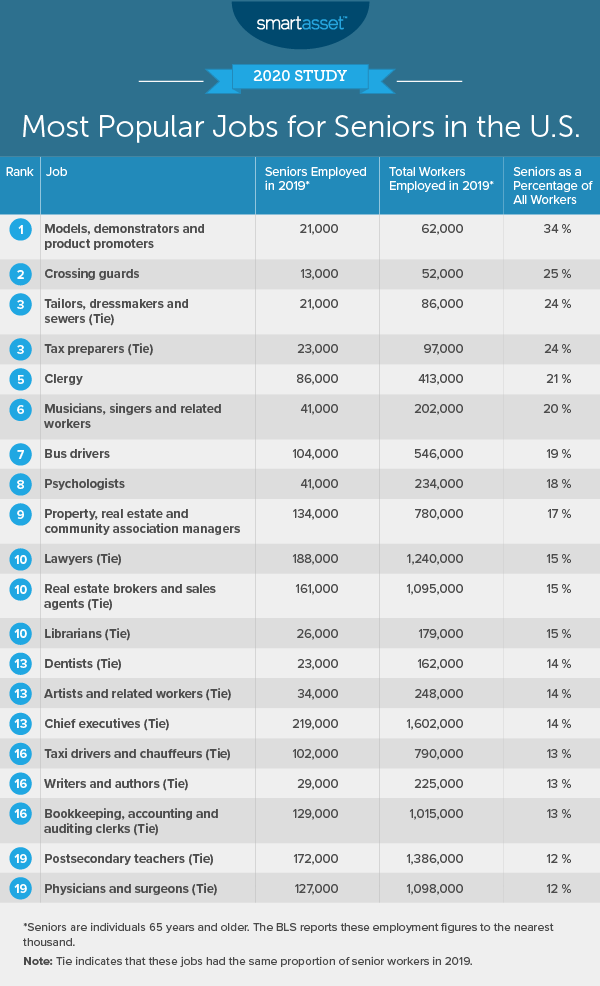 Beyond construction and computer occupations, the number of workers 65 and older grew by more than 50% in six additional occupations:

Of those occupations, taxi drivers and chauffeurs saw the largest gross increase in employed seniors. Roughly 57,000 taxi drivers were 65 and older in 2015 relative to about 102,000 in 2019. The table below shows the 20 fastest-growing jobs for seniors between 2015 and 2019. 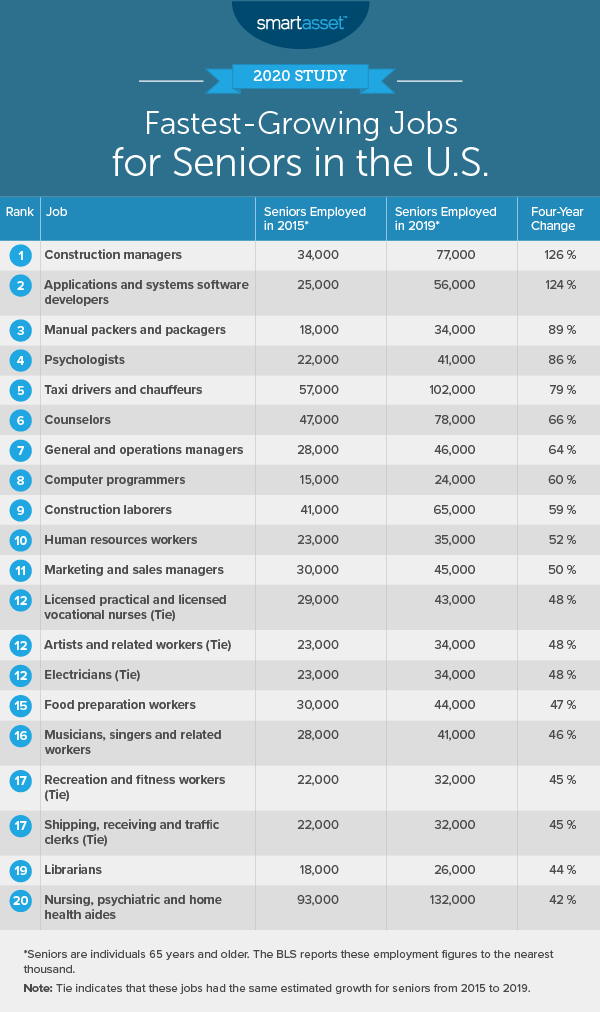 Data for this report comes from the Bureau of Labor Statistics’ Current Population Survey. In both sections, we filtered out any occupation that employed fewer than 15,000 seniors in 2015. We also filtered out any occupation with “other” or “miscellaneous” in the title due to lack of occupational specificity. In the first section, we ranked occupations based on the percentage of workers who were 65 and older in 2019. In the second section, we looked at the four-year percentage change in seniors employed in each occupation from 2015 to 2019, ranking the occupations from highest to lowest change.

Tips for Ensuring a Comfortable Retirement