The Decline of Physical Banks in America – 2020 Study 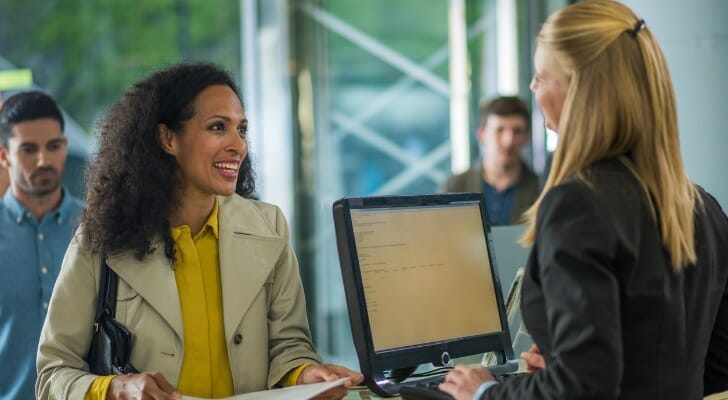 With online and mobile banking increasing in popularity, physical banks have struggled to keep their doors open. Over the past five years, the number of branch locations in America declined by 7%. Though digital banking services may allow for easier service for some customers as they deposit checks into their savings, bank branch locations continue to be an important resource for others.

In a recent Federal Reserve report, researchers note that the shift to digital banking channels is occurring more gradually for older individuals, those with lower incomes or fewer years of formal education and inhabitants of rural communities. Additionally, for all customers, even those who mostly use digital bank services, branches continue to be the dominant channel when applying for new products. According to Deloitte survey results, 65% of Americans prefer branches when applying for a mortgage, and 58% prefer one when opening a checking account.

The decline of branch offices has not been felt evenly by different banks and throughout the country. In this study, SmartAsset looked at trends in branch closures for the five largest banks in America and the cities where it has become most difficult to visit a physical bank. For details on our data sources and how we put all the information together to create the final rankings, check out the Data and Methodology section below. 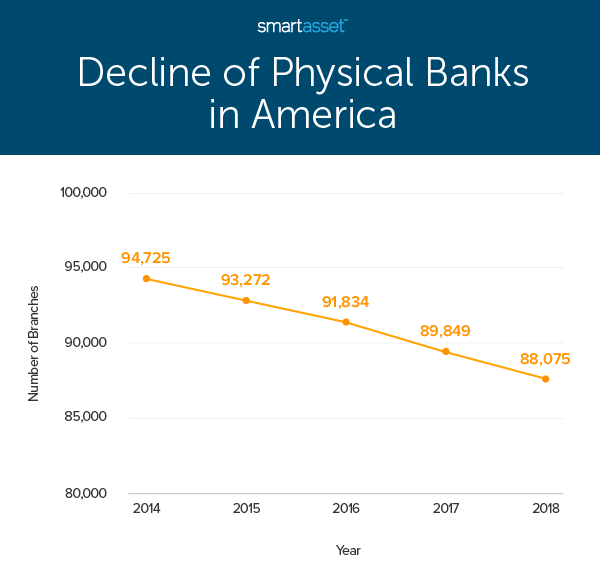 By net assets, JPMorgan Chase Bank, Bank of America, Wells Fargo Bank, Citibank and U.S. Bank are the largest banks in America. The Federal Deposit Insurance Corporation (FDIC) reported the following net asset figures for each of those banks at the end of 2018:

All five banks have shut down branch locations in recent years, with Bank of America shuttering the greatest number of local offices (620) and Citibank experiencing the steepest percentage decline (25.3%). Despite numerous legal troubles in the past several years, Wells Fargo Bank closed branches at a rate equal to the national average, approximately 7.0%. Finally, JPMorgan Chase Bank closed about 530 offices – or 9.4% of their total branches – between 2014 and 2018, while U.S. Bank closed 110 offices, or 3.4% of their branches. The chart below shows the number of branch locations for each bank in 2014 and 2018. 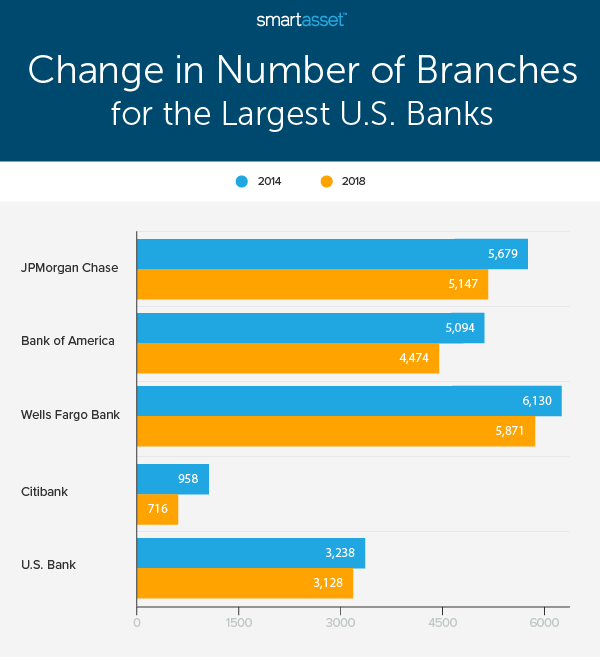 Cities Where It’s Hardest to Visit a Physical Bank

Over the past several years, some places have seen more bank closures than others. The map below shows the cities where it has become harder to visit a physical location. 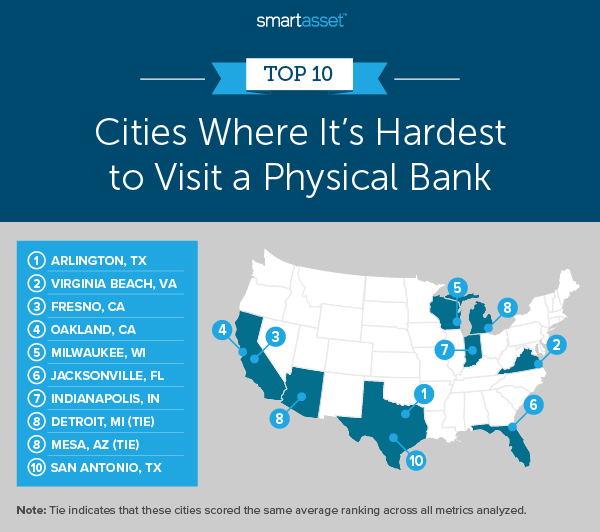 Relative to the number of residents, banks are about 40% less common in Arlington, Texas than they are nationally. In 2018, there were 15.82 banks for every 100,000 residents in Arlington compared to the national average of 26.92. Arlington has also felt the squeeze of banks in recent years more than other cities have. Between 2014 and 2018, the number of bank branch locations in Arlington declined by 18.2%, the largest decline of any city in our study.

With a population of roughly 450,000 and 77 bank branch locations, Virginia Beach, Virginia has the 11th-lowest number of banks per 100,000 residents of the 50 largest U.S. cities. Behind Arlington, Texas, Virginia Beach also had the second-largest decline between 2014 and 2018, with the number of local bank branches decreasing by 15.4%.

Oakland, California ranks in the bottom fifth for all three metrics we considered: banks per 100,000 residents, one-year change in number of banks and five-year change in number of banks. In 2018, there were only 15.61 banks per 100,000 residents in the city. Moreover, the number of federally insured bank offices declined by 4.3% and 11.8% over the past one and five years, respectively.

Almost half of the five-year decline in physical bank locations in Milwaukee, Wisconsin happened within the last year. The number of banks decreased by 12.3% between 2014 and 2018, the seventh-largest percentage decline in our study. However, between 2017 and 2018 alone, the number of banks fell by 6.2%, the greatest one-year percentage decline of any city in our study.

Detroit, Michigan has the lowest number of banks per 100,000 residents of any city in our top 10. We found using FDIC bank data and Census Bureau population data that there were only about 13 banks for every 100,000 residents in 2018, the fourth-lowest concentration of any of the 50 largest U.S. cities, following only Los Angeles, California; El Paso, Texas; and Long Beach, California. Over the past one and five years, the number of bank offices declined by 2.3% and 10.4%, respectively. 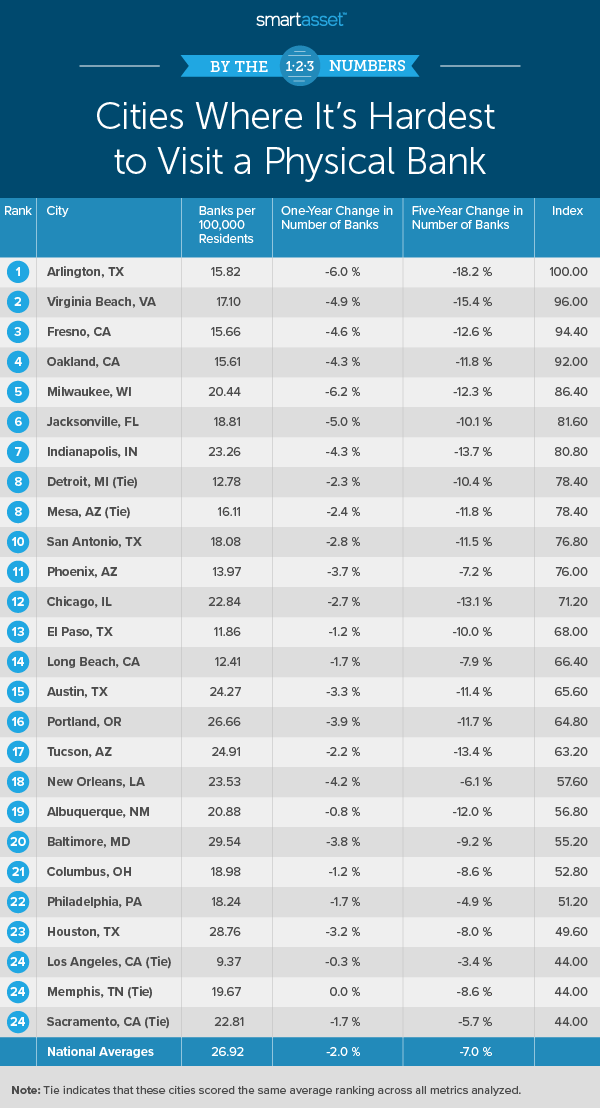 To find the cities where it’s hardest to visit a physical bank, SmartAsset looked at the 50 largest cities in the U.S., considering only federally insured banks as reported by the Federal Deposit Insurance Corporation (FDIC). We compared them across the following three metrics: