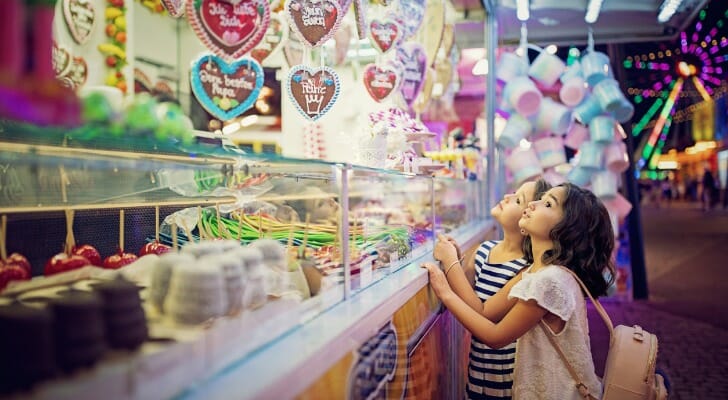 Nothing screams “Americana” quite like a summer afternoon spent at the state fair. The sounds of laughing children and braying livestock. The sights of carnival rides and butter sculptures. The signature scent, a combination of sunscreen, funnel cakes and animal manure, wafting through the grounds. Which states, though, have the best state fairs – the ones where you and your family will best be able to enjoy on a budget and create memories to last a lifetime, all without having to dip into your savings?

In order to rank America’s best state fairs, SmartAsset analyzed the data across the following five factors: the length of the fairs, attendance rates, cost of general admission for adults and children and weather. For a full explanation of how we came to our rankings, see the Data and Methodology section below. 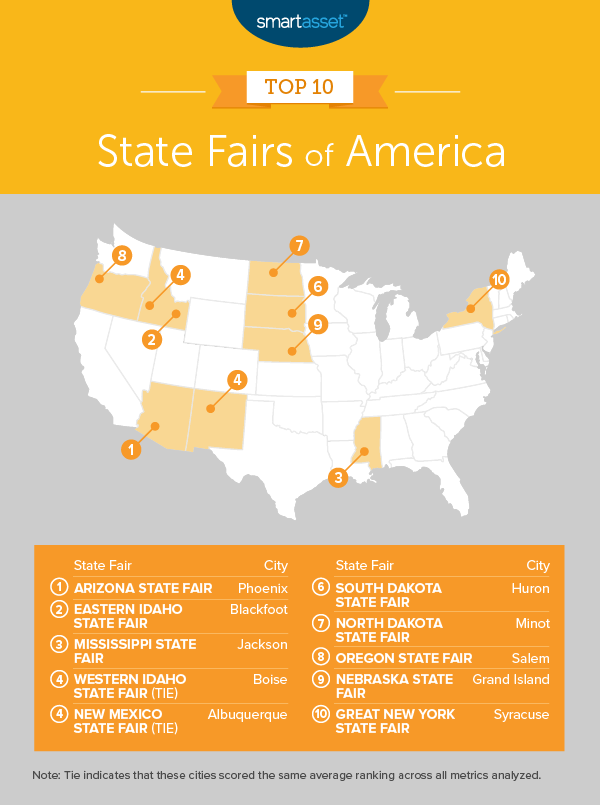 One of the newcomers to this year’s list, the Arizona State Fair wasn’t even part of the study last year. This year, it leads our study in terms of length, open for a whole 24 days. The fair, held in Phoenix, also ranks well for its low average daily precipitation – being located in the desert tends to make for fairly dry conditions.

Furthermore, while many state fairs are held in the summer, Arizona’s is held in October, a month in which average daily precipitation is approximately 0.02 inches. It would likely be too hot for much enjoyment if the fair were held under the Southwestern summer sun.

The Eastern Idaho State Fair is held in late August and early September, and last year 248,000 people attended, which is constitutes approximately 14% of Idaho’s population.

One potential downside is that the fair, held each year in Jackson, does rank in the bottom quarter of our list in the metric of average daily precipitation. It’ll be important to check the weather reports before loading up the car, but with a total duration of 13 days, it should be easy to reschedule if it rains on your parade.

This fair ranks in the top 10 for both metrics of adult and youth admission. The cost is $7 for an adult and $4 for a child.

Tied with the Western Idaho State Fair for the fourth spot in our study is the New Mexico State Fair, held in September in Albuquerque. This state fair ranks sixth in our study for average daily precipitation. It also has the seventh-highest ranking in our study for the percentage of its population attending the fair – 24% of New Mexico’s population, 504,445 people to be exact, crossed through the fair’s gates last year.

The New Mexico State Fair does have a fairly high admission cost, however, at $10 for adults and $7 for children. That ties with the Arizona State Fair for the highest youth admission price tag in the top 10.

Next up is the South Dakota State Fair, held each summer in Huron. At just $6, this fair is tied with the Eastern Idaho State Fair for the second-cheapest adult admission in our study. At just five days long, though, it is also tied (with the Michigan State Fair) for the shortest state fair we studied.

A total of 25% of the state’s population attended the South Dakota State Fair last year, placing this fair in the top 10 for that metric as well.

The North Dakota State Fair ranks seventh on our list. Minot hosts this fair each July. Even though North Dakota is one of the more sparsely populated states in our study, a whopping 42% of the state’s population attends the fair, which is the highest rate for this metric in our study.

The fair does not fare as well in terms of length, however, as it is only nine days long.

Located in the Pacific Northwest, the Oregon State Fair is held in Salem. Despite the region’s reputation for rain, the fair actually ranks fifth in our study for low average daily precipitation during the month in which it occurs. It also ranks fifth for adult admission, costing only $8. However, only a relatively small percentage of the state’s residents made it to the 2018 fair – specifically 8%, or 316,153.

The Nebraska State Fair, located in Grand Island, is next. The Cornhusker State’s showcase costs just $3 for youth, the seventh-lowest price for children of all the fairs in our study. The adult price isn’t as inexpensive – adults gain entry for $12, which puts this fair at 25th out of 36 for this metric in our study. Nebraska receives an average of approximately 0.09 inches of precipitation across late August and early September, a low rainfall metric that allowed 16% of its population to enjoy its state fair in 2018.

The only East Coast fair in our study, the Great New York State Fair is held in Syracuse each year during late August and early September. It’s free for children, so be sure to take advantage. Only 7% of the state’s population attended the 13-day fair last year. While that is a relatively low percentage, it still comes out to 1,279,010 total attendees.

We analyzed data from 36 state fairs to find the best in the nation. This data represents the states for which a full data set was available. We used the following metrics to compare the fairs:

Getting More Out of Your Money