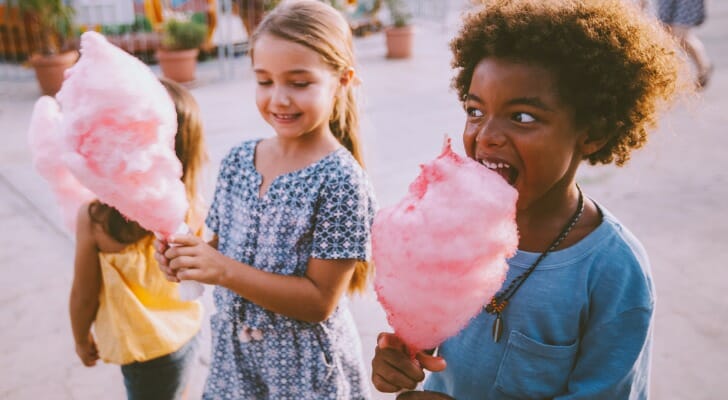 Millions of Americans attend state fairs across the country every year. From rides and concerts to games and fried food, there’s something for everyone at a state fair. And with rising costs of living, state fairs are one of the few entertainment options which the majority of Americans can afford without breaking into their savings accounts. However state fairs vary widely by location. Some state fairs last for weeks and are attended by large chunks of the state’s population. Others are only a few days and go by almost unnoticed by the state’s residents.

In order to rank America’s best state fairs, we analyzed data across five factors. We looked at the length of the fairs, attendance rates, cost of general admission for adults and children and weather. Check out our data and methodology section below, to see where we got our data and how we put it together. 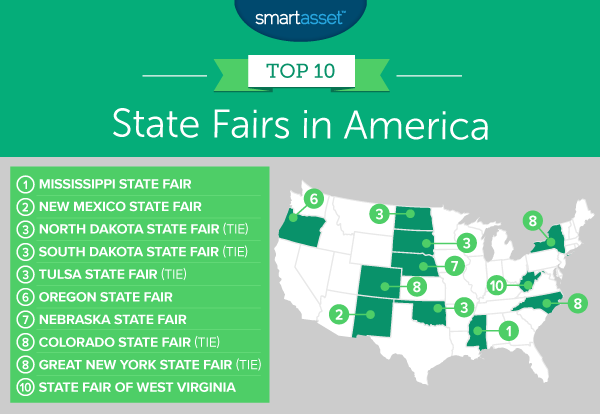 Once again, the Mississippi State Fair tops the list as the best state fair in America. This fair is in town for 12 days, making it one of the longest state fairs in our study. Another reason it ranks so highly is because it is an affordable event for the whole family. Admission for adults and children is only $5.

Thanks to rain on the first weekend of the fair in 2017, attendance was down from the record-setting year of 2016. But overall the equivalent of 20% of the state attended the 2017 Mississippi State Fair. For that metric, it ranks ninth.

Despite the slight decrease in attendance, the equivalent of 22% of New Mexicans still attended the state fair, a top 10 mark. Adult admissions to this fair are also fairly affordable at only $10 per adult. The New Mexico State Fair’s best score came in chance of precipitation. This area usually gets less than 0.1 inches of rain per day during the month that the fair is held, the third-lowest score in our study.

If we were scoring only by attendance, North Dakota would have an argument for the top spot. Attendance at the 2017 North Dakota State Fair fell just short of 300,000, a 2% increase from the year before. While that number may not blow you away, it’s the equivalent of two out of every five North Dakotans attending the state fair. In that metric, the state ranks first.

This state fair also ranks in the top 10 for youth admission price, adult admission price and average inches of precipitation. The only downside to the North Dakota State Fair is the length. At only nine days, it is the second-shortest state fair in our top 10.

The main reason South Dakota ranks so well is because of its affordability. Adults attending this state fair will pay $6 and children only cost $4. That means a full day of family fun, including watching cheese sculpting and arm-wrestling competitions, for two adults and two children costs only $20.

Last year, we were missing data for the Tulsa State Fair so it was not part of this study. This year, it tied with the North Dakota and South Dakota State Fairs for third. Overall around 1.15 million people attended the Tulsa State Fair, which is almost 30% of the state’s population. As a bonus: it almost never rains in Tulsa in September or October.

If you are thinking about attending this year, Disney on Ice will be at the Tulsa State Fair, although you will have to pay extra for tickets. Other fun events include the livestock show and the Oklahoma State Picking and Fiddling Championships.

The Oregon State Fair fell from fourth place last year to sixth place this year. One reason for the decline in our rankings is the decline in attendance. Thanks to unfriendly fair weather, officials estimate attendance fell by around 10% between 2016 and 2017. On seven of the 11 days of the fair, temperatures topped 90 degrees.

Still, the Oregon State Fair is an affordable place to spend a day or a weekend. Combined, one adult and one youth ticket would cost only $14. In both of those metrics, Oregon ranks in the top 15.

Adult admission to this state fair is on the high side at $12. However families with younger children will be able to keep their checking accounts in tact, thanks to the affordable youth admission price. A youth ticket to the Nebraska State Fair costs only $3.

The Colorado State Fair is tied for eighth, an improvement on last year’s ninth-place finish. The main reason for the climb is an increase in attendance. From 2016 to 2017, attendance at the Colorado State Fair increased by 13,600, or roughly 3%. That means the number of fairgoers were equivalent to 9% of the state’s population. Another metric in Colorado’s favor is the weather. Pueblo, Colorado – where the state fair is held – is pretty dry in August and September.

If you are looking to attend the Colorado State Fair on a budget, there are plenty of free attractions. Last year’s free attractions included a petting zoo, a Sea Lion Splash Show and Antique Tractors, among other things.

Over 1.16 million people attended the 2017 version of the Great New York State Fair. That makes it one of the best-attended state fairs in the country. However New York is a highly populated state, so 1.16 million attendees is only equivalent to 6% of the state’s population.

This fair provides great value. It runs for 13 days, the fifth-longest in the study, and children get in for free. In terms of length and cost, you will struggle to find a better state fair.

Rounding out the list of the best state fairs is the State Fair of West Virginia. This state fair runs for 10 days and is held in Lewisburg. This fair scored high marks for affordability. Adult tickets cost only $9 and children can enter for free.

With all the money saved on admission, you can probably afford to splurge a little on things to do at the fair. Maybe attend a concert or get an extra fried dough or two. 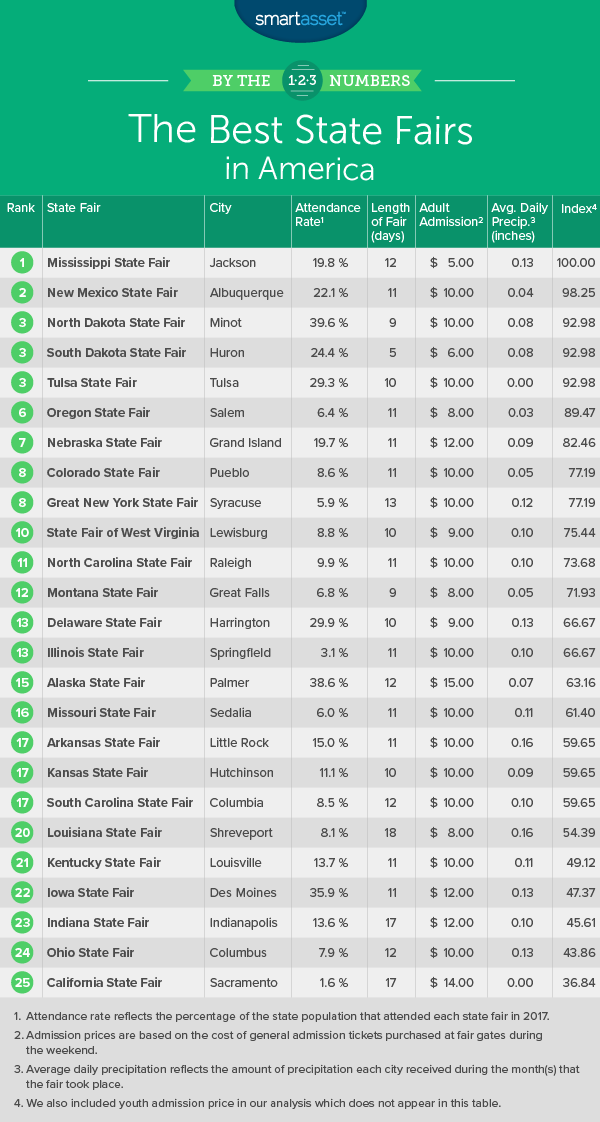 In order to find the best state fairs, we looked at data for 32 state fairs. That was all the state fairs in the country for which we had full data sets. Specifically, we compared them across the following five metrics:

Tips for Stretching Your Savings