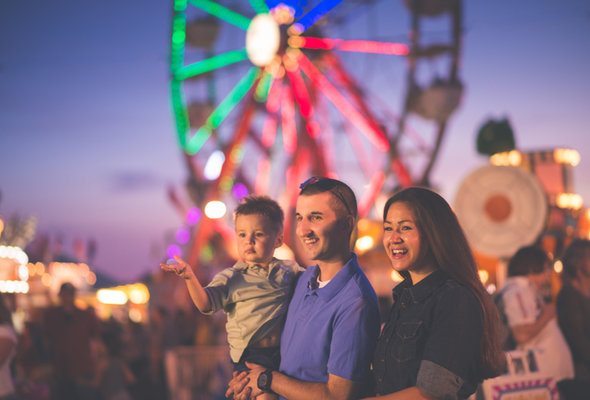 Summer memories wouldn’t be complete for many Americans without tractor pulls, fried dough and live music with friends and family. Each year millions of attendees celebrate the end of summer and the start of fall with a trip to a state fair. Agriculture displays, horsemanship and classic car shows are just a few of the events you’ll find at many of these family-friendly celebrations. Affordable ticket prices and two weeks of festivities are a few more incentives for why you should check one out yourself.

Give our budget calculator a try.

For our second year in a row, SmartAsset did the legwork to find the best state fairs in America. Before we get into the details and the top 10 list, read on to see how we defined “state fair.”

What Is a State Fair?

For our analysis, we defined a state fair as an annual, large-scale agricultural event with music, contests, food and fun for the whole family. We only included official state fairs in our study. This means we excluded fairs that catered to a specific county or region within the state. According to the International Association of Fairs and Expositions, fairs are defined by multiple competitions involving produce or farm animals. This distinction marks fairs as separate from carnivals or festivals, despite sharing many characteristics like rides and entertainment.

To create this list, we ranked the state fairs based on five factors. These included attendance rates, adult and youth admission prices, the length of the fair and daily precipitation averages for the time of the fair.

This year our data set comprised of 31 state fairs. The states that weren’t included in our study lacked sufficient data to properly compare numbers with the rest of the list. We contacted a number of those state offices, but did not hear back from them prior to publishing this article.

A number of state fairs that we ranked last year were not included this year due to a lack of data. The state fairs we left off for 2017 are as follows: Arizona, Tulsa, Oklahoma, Maryland, Nevada, Utah, Tennessee, New Jersey and Virginia.

This year we were able to include Mississippi and Texas, two states that were not in our previous study.

For further understanding of our study specifications, scroll to find our full methodology. 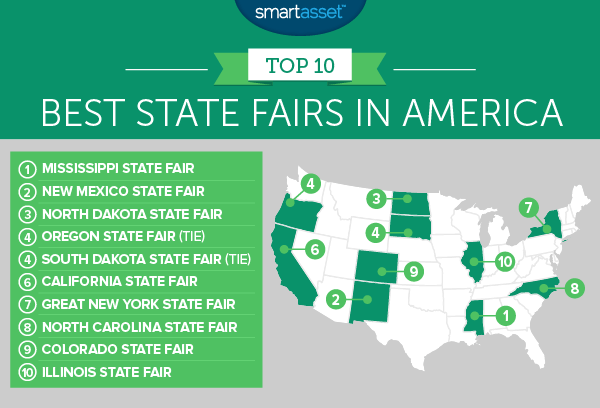 While we had to leave the Mississippi State Fair off of our list last year due to a lack of data, it made a strong splash in this year’s study with a record attendance of 733,151 fairgoers.

Musical performances, livestock shows, a fiddlers’ contest and plenty of kid-friendly activities like petting zoos and magic shows are just a few hallmarks of the 12-day event. And though there’s plenty of treats to choose from, the Biscuit Booth, home to hot, made-from-scratch biscuits is a perpetual fan favorite. Plus, the ticket prices are the lowest in our top 10, clocking in at just $5.

Last year’s ninth-place fair moves up seven spots this year, no doubt helped by close to 500,000 attendees who made it to this Albuquerque-based state fair in 2016. Popular events include several nights of Professional Rodeo Cowboys Association-affiliated rodeos, and plenty of concerts and midway rides. In an effort to ease up transportation woes in and out of the fairgrounds, officials used a novel approach for 2016’s season. The city teamed up with Uber, creating an Uber Lounge and discounted services to help get fairgoers to their destinations.

Family fun is important at this fair with kid-friendly events including the diaper derby, toddler trot and kid’s tractor pedal pull.

It seems only fitting that the Oregon State Fair jumps up from last year’s No. 22 spot. After all, the fair has been held almost every year since 1862. The 11-day, Salem-based event features classics such as musical performances, agriculture and livestock exhibits. But you’ll also find things such as author’s day, where Oregon writers share some of their published work. It’s also home to the Gerry Frank Chocolate Layer Cake Contest, claimed to be the best-known and longest-running cake contest in the country.

North Dakota’s neighbor just missed the top 10 last year, squeaking in as No.11. For this year’s study, the attendees (211,371 in 2016), good weather and bargain prices helped raise the event to the top five. Clocking in as the shortest state fair in the top 10 at only five days, the event still packs plenty on the schedule.

With more than 10 stages to watch musical performances ranging from Queen tribute bands to family fun groups, you’ll find something for every musical taste. And if you want a break from music, choose from special events such as the corn hole championship and live horse racing.

The Northeast joins the list with the Great New York State fair, a jump from last year’s No.23 spot. Last season’s better weather and 1,117,630 visitors helped move this 13-day affair to the top 10.

The Syracuse-based event hosts the Taste NY Food Truck competition as well as one of the top five classic car shows in the country. Musical acts for 2017 include 3 Doors Down and LeAnn Rimes.

Last year’s fair featured over 117 concerts running the gamut from Cajun/zydeco blues, to choral and heavy metal — with everything in between. The food contests highlight regional flavor with separate contests for one-pot sweet potato recipes, chicken and waffles and a pecan recipe competition.

Agriculture competitions like the junior breeding sheep showmanship contest and carnival rides like the Ferris wheel come together for Colorado’s annual state fair. Last year’s No.21 moves up to number nine this year.

The Pueblo-hosted event saw 466,576 visitors during the 11-day run in 2016 and provided $29 million in economic activity to Colorado. Fair highlights include rodeos, monster trucks and a demolition derby.

Last year’s No.18 jumps up eight spots to secure the last spot in the top 10. The Springfield, Illinois-based event features headliners Jason Derulo, Brad Paisley and Five Finger Death Punch for the 2017 line-up. Other attractions include an educational area called conservation world which contains over 30 acres of green space used for interactive outdoor displays as well as canoe rides. There’s also the Happy Hollow, which features exotic animal entertainment and a petting zoo. 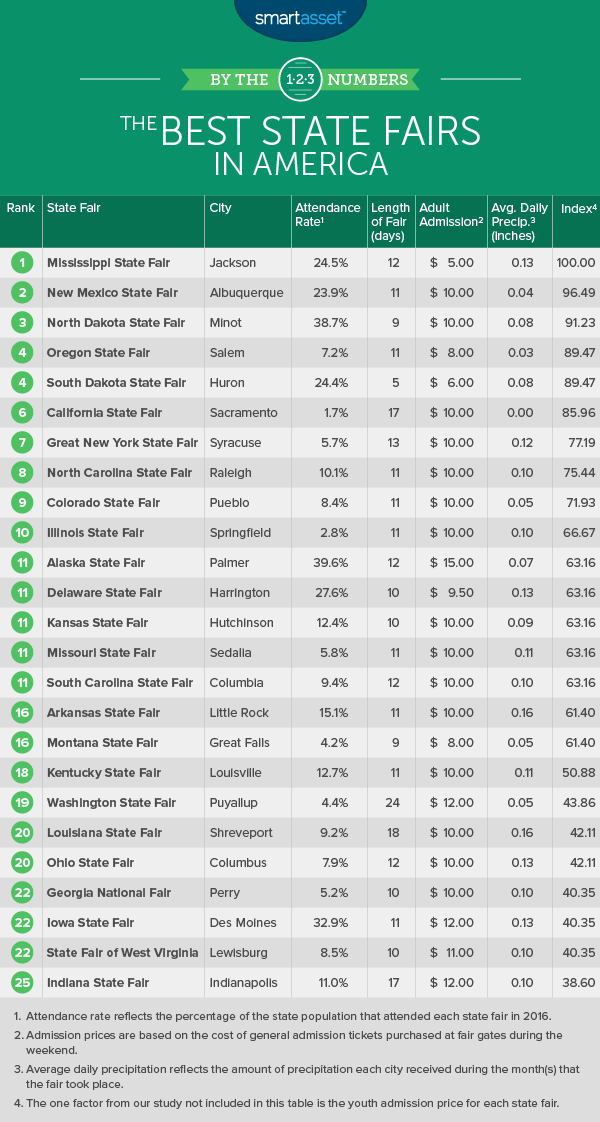 For this study on the best state fairs in 2017, SmartAsset looked at adult and youth admission prices, attendance numbers, monthly and daily precipitation averages and the length of each state fair.

To calculate fair attendance rates, we first looked at the total number of people who attended each state fair in 2016. In many cases the numbers are estimates, as these numbers are based on figures that the individual state fairs reported. We then took the attendance figures and divided by the total number of people residing in each area, using state-level 2016 population figures from the U.S. Census Bureau.

Admission prices and fair length was collected from each state fair’s website. The prices represent the cost of general admission tickets purchased at the fair gates during the weekend. Discounts were not taken into account. Youth admission prices generally reflect ticket prices for children between the ages of 6 and 12, although age breakdowns vary by state.

Daily precipitation data reflects numbers from the National Oceanic and Atmospheric Administration (NOAA). The monthly normals from NOAA take 30 years of weather data into account. We looked at the average amount of precipitation (in inches) that fell during the months that the fairs took place from 1981 to 2010, and divided it by the number of days in those months to find the daily average precipitation. Note, this is different from last year’s methodology. Last year we used daily precipitation data from a single year – 2015.