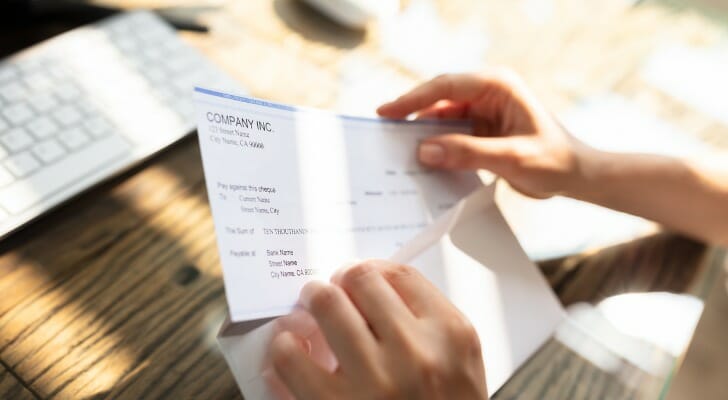 According to Census data, more than 17% of American households earn between $50,000 and $74,999, making it the income bracket comprising the highest number of people. This large cohort may not be among the most handsomely paid in the U.S., but strategically living in a place with robust employment opportunities and a lower cost of living can help Americans stretch their dollar further and enable them to sock away ample savings. With that in mind, SmartAsset decided to find the best cities in America for those with an annual income of $60,000, the sweet-spot of this range.

To find the best cities in America to live on a $60,000 salary, we compared 97 cities (all with a population of at least 60,000 and a median household income of between $55,000 and $65,000) across the following nine metrics: median household income, median monthly housing costs, housing costs as a percentage of a $60,000 income, entertainment establishments per 10,000 residents, civic establishments per 10,000 residents, percentage of people without health insurance, average commute time, unemployment rate and poverty rate. For details on our data sources and how we put all the information together to create our final rankings, check out the Data and Methodology section below.

This is SmartAsset’s second annual study on the best places to live on a $60,000 salary. Read the 2019 version here. 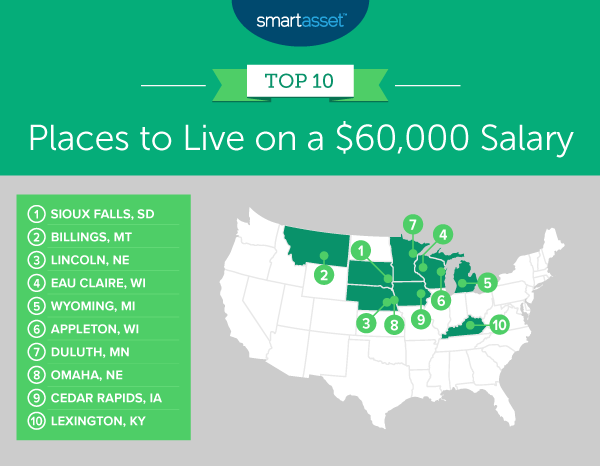 Billings, Montana has 13.08 civic institutions per 10,000 residents (the seventh-highest rate for this metric in the study) and 10.48 entertainment establishments per 10,000 residents (the sixth-highest rate in the study). Only 4.4% of the population in Billings is without health insurance – the sixth-lowest rate for this metric across all 97 cities we analyzed.

Lincoln, Nebraska had an unemployment rate of just 5.0% in July 2020, the second-lowest ranking overall for this metric. Lincoln has 13.26 civic establishments per 10,000 residents, sixth-highest in the study. The city places 10th overall for average commute time, with the average person going from home to work in 18.4 minutes.

Eau Claire, Wisconsin has an average commute time of just 15.1 minutes, ranking second-shortest in the study. The city places eighth for two other metrics: median monthly housing costs ($915) and housing costs as a percentage of a $60,000 income (18.30%).

Wyoming, Michigan has a poverty rate of just 8.5%, ranking fifth-best across all 97 cities we studied. Wyoming places fourth in two separate metrics related to housing costs: median monthly housing costs ($880) and median housing costs as a percentage of a $60,000 income (17.60%). There are 12.01 civic establishments per 10,000 residents, ninth-highest overall.

Duluth, Minnesota has the highest number of civic establishments of any city we analyzed, at 15.62 per 10,000 residents. The city comes in third in terms of the percentage of residents without health insurance, at just 3.5%, and fifth for average commute time, at 16.8 minutes. While Duluth has a median household income of just $55,819 – ranking 88th overall for this metric – it ranks ninth overall for both housing cost metrics we considered.

Omaha, Nebraska had the 11th-lowest July 2020 unemployment rate in the study, coming in at 6.4%. The city places 20th for its relatively low poverty rate, with 11.6% of the population living below the poverty line. Omaha is fairly expensive, with median monthly housing costs of $1,044, which represents 20.88% of a $60,000 income – ranking 31st out of 97 in the study for both housing costs and housing costs as a percentage of income.

Cedar Rapids, Iowa has monthly median housing costs of $902, which is 18.04% of a $60,000 income. The city places seventh in our study for both of those metrics. Cedar Rapids has two other top-15 metrics: It ranks 12th overall for the relatively low percentage of people without health insurance (5.5%) and 13th overall for average commute time (18.7 minutes). 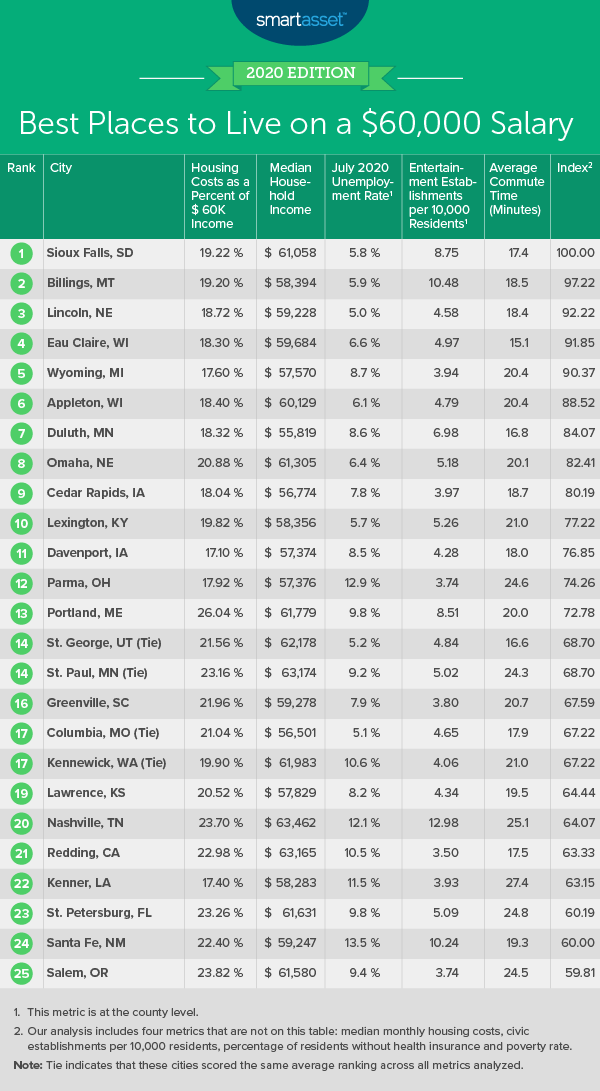 To find the best cities in the U.S. to live on a $60,000 salary, SmartAsset first created a list of the cities in which the population was at least 60,000 people and the median household income was between $55,000 and $65,000. We did this in order to find the cities where an income of $60,000 fell within the range of an average household. This resulted in a list of 97 cities, which we compared across the following nine metrics:

Tips for Managing your Money With $60k in Income