The Best Cities for First-Time Homebuyers in 2019 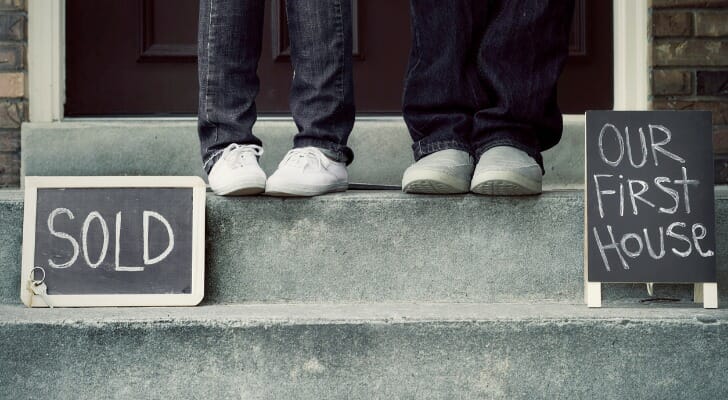 Buying a home requires just as much care as any other significant investment. If being a first-time homebuyer is a part of your American dream, it’s important to choose a home that fits your budget based on your savings at the same time that it meets your other lifestyle needs. First-time homebuyers might find the home-buying process especially daunting, but there are many programs out there to help make it easier. And location, of course, is a crucial factor. Local market conditions, such as how stable the housing market is, can sometimes make all the difference. To help you get a better sense of where to start looking, SmartAsset created this list of the best cities for first-time homebuyers.

To find the top contenders, we ran the data to find the best cities for first-time homebuyers. We looked specifically at data on seven factors: the number of HUD-approved lenders, loan funding ratios, the average price per square foot, housing affordability, homeowner stability, home price volatility and the number of negative quarters over the past six years. You can learn more about our data sources and how we created final rankings by reading the Data and Methodology section below. 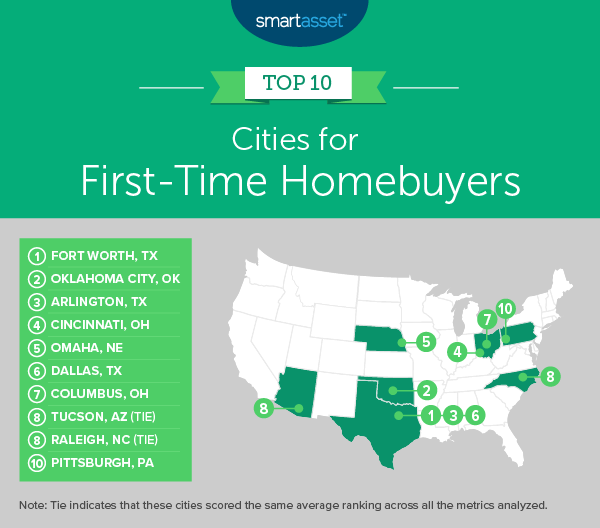 This is SmartAsset’s fifth annual study of the best cities for first-time homebuyers. Read the 2018 version here.

Fort Worth, Texas moved up 10 spots from last year’s list to claim the title as the best city for first-time homebuyers in 2019. The North Central Texas city ranks first overall in the metric of negative quarters, with our data showing the city has had zero year-over-year negative quarters between 2013 and 2018.

Fort Worth also ranks in the top 20 in our study for the metrics of affordability ratio, homeowner stability, market volatility and value per square foot.

Another Texas city, Arlington, comes in third among the best cities for first-time homebuyers. Jumping from the 14th spot last year, Arlington has had zero negative quarters year over year between the first quarter of 2013 and the final quarter of 2018. This ties it with Fort Worth and several other cities for first in this metric.

Arlington is also tied with Fort Worth in 10th place for affordability. Our data indicates that Arlington has a five-year income-to-housing-costs ratio of 4.92. On the downside, it has the lowest number of HUD-approved mortgage lenders – 27 – out of any top-10 city.

Cincinnati, Ohio offers both housing affordability and a low average price per square foot, ranking ninth overall in both metrics. The city has a five-year income-to-housing-costs ratio of approximately 5.01 and an average value per square foot of $94.08.

Unlike the previous four cities, Omaha, Nebraska actually dropped a couple of spots in this year’s list. The city has had three year-over-year negative quarters between 2013 and 2018. It also has a higher average value per square foot – $124.08 – than seven other top 10 cities.

However, it still holds strong in a number of metrics. In Omaha, an impressive 82% of conventional mortgage loan applications are funded, which puts the city in second overall for that metric. It also has a top-10 score for homeowner stability.

Dallas, which appeared in the 10th spot last year, is the third Texas city to make it into our top 10 for 2019. The city stands out for the number of HUD-approved mortgage lenders there. It ranks second overall in this metric, with a total of 201 mortgage lenders. Additionally, Dallas has had zero year-over-year negative quarters between 2013 and 2018, tying it for first in this metric.

Dallas does have the lowest loan funding rate in our top 10, with only 70% of conventional mortgage loan applications there funded. It also has the highest value per square foot of any city in our top 10, at $137.75.

In further evidence that Ohio is becoming increasingly hospitable to first-time homebuyers, Columbus is the second Buckeye State city to move into the top 10 after not even making the top 25 in 2018. Like several other cities in our top 10, Columbus has had zero year-over-year negative quarters between 2013 and 2018, which is a top score.

The city also has a top-20 score for loan funding rate, with 76% of conventional mortgage loan applications funded.

Tucson, Arizona landed in the 8th spot this year also after not even entering the top 25 last year. It has had zero year-over-year negative quarters between 2013 and 2018, which ties it for first in this metric with several other cities. Tucson also has a top-20 score for housing affordability ratio.

One factor that might have kept Tucson from ranking higher this year is its homeowner stability index score, which is lower than that of any other city in our top 10.

Raleigh, North Carolina jumped nine spots this year and now ties with Tucson. North Carolina’s capital city boasts top-20 scores in two metrics, loan funding rate and market volatility. Out of all the conventional mortgage loans in the city, 76% are funded. Raleigh’s market volatility, or its standard deviation of annual housing price changes from 2013 to 2018, is 0.90%.

The city has only had one quarter of negative growth in home values between 2013 and 2018.

Our list of the top 10 best places for first-time homebuyers concludes with Pittsburgh, Pennsylvania, which was our top-ranking city last year. Where Pittsburgh especially lags behind the rest of the top 10 is in its ranking for number of negative quarters. The Steel City has had four year-over-year negative quarters between 2013 and 2018. It makes up for this lag, though, with its third-place spot in the metric of loan funding rate. About 81% of conventional mortgage loans here are funded. The city also ranks in the top 10 for the metrics of affordability ratio and homeowner stability index. 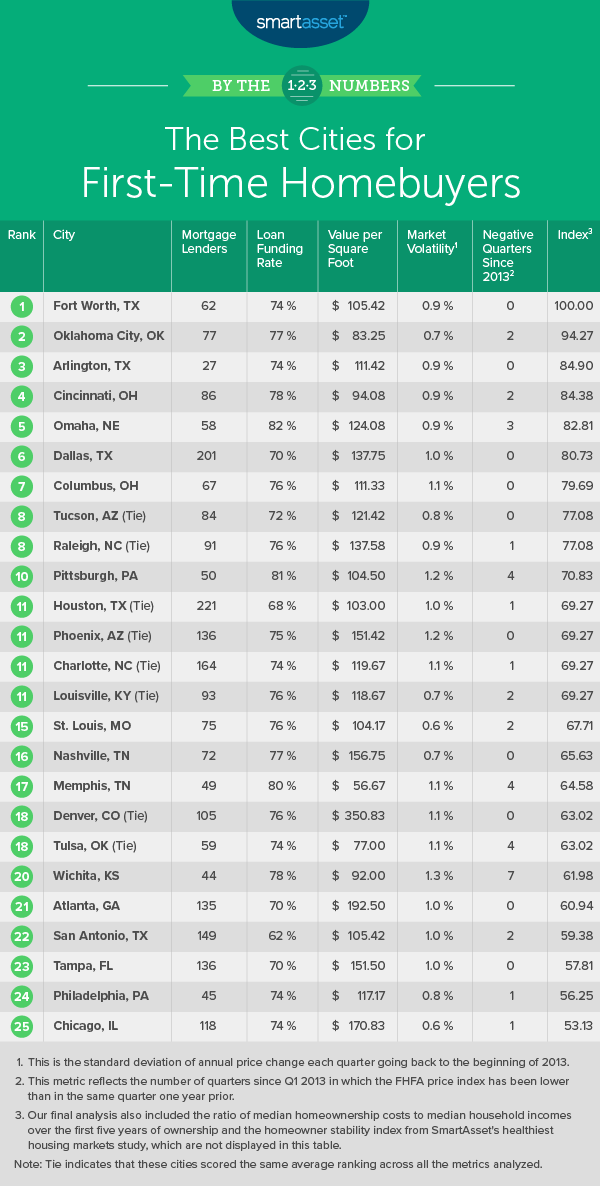 To determine the best cities in the country for first-time homebuyers, SmartAsset analyzed data for every U.S. city with a population of more than 300,000. That left us with 66 cities, and we compared them across the following seven metrics: