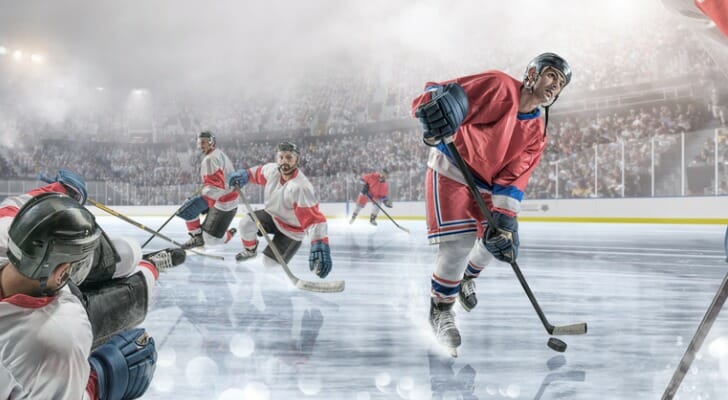 They say the good old hockey game is the best game you can name, and for some cities across the U.S., that is clearly true. Since the 2005-2006 National Hockey League (NHL) season – which came directly after a labor dispute cancelled an entire season for the league – revenue has more than doubled, from $2.27 billion to $5.09 billion for the 2018-19 season, according to Statista data. And though the current NHL season was postponed when the COVID-19 pandemic began, puck fans can look forward to an expanded postseason tournament currently set to begin within a quarantine bubble on August 1, 2020. But hockey is more than just the NHL. Fans in cities across the country have minor league and college teams that they support fervently, with enough diehards socking away their savings to buy tickets and fill home stadiums to the brim. Keeping in mind many levels of competitive hockey, in addition to a host of local lifestyle metrics, SmartAsset crunched the numbers to find the best hockey towns in America.

To find the best hockey towns in the country, we looked at a total of nine metrics that fell into two general categories: fan intensity and quality of life. Fan intensity metrics include average game attendance as a percentage of stadium capacity, per-game attendance as a percentage of population and Google search traffic for “hockey” relative to “food.” Meanwhile, the quality of life factors we considered include median household income, median monthly housing costs, violent crime rate, property crime rate and dining and entertainment establishments per 100,000 residents. We considered data for cities that have a team in either the National Hockey League (NHL), National Collegiate Athletic Association (NCAA) Division 1 men’s hockey, the American Hockey League (AHL) or the ECHL. For details on our data sources and how we put all the information together to create our final rankings, check out the Data and Methodology section below. 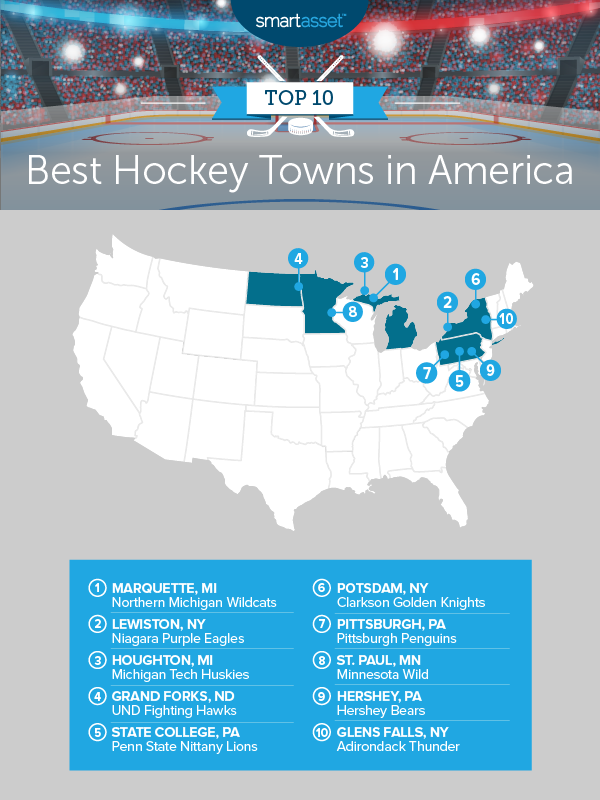 Marquette, Michigan ranks first overall and is the first of two cities in Michigan on this list. Fans in Marquette root for the Northern Michigan University Wildcats and they search for “hockey” on Google 89% as often as they search for “food,” the third-highest rate for this metric in the study. Attendance at games represents 15% of the town’s population, the 16th-highest rate overall.

Lewiston, New York, where the local fans root for the Niagara University Purple Eagles, has the best quality of life score in this study. That includes ranking in the top 15 for both crime metrics — there are 82 incidents of violent crime and 973 incidents of property crime each year per 100,000 residents. Lewiston also has the ninth-highest average game attendance as a percentage of population 21.26%.

Houghton, Michigan is the home of the Michigan Tech Huskies — the alma mater of John Scott, the legendary NHL tough guy who was famously voted as an All-Star Game captain in 2016 after a fan campaign. Houghton is in this study’s top 10 for both fan intensity and quality of life. Average game attendance represents 38.63% of the town’s population, which is fifth in this study. It also ranks third in the Google metric: People in the town search for hockey 89% as often as they search for food. Median monthly housing costs are $709, fifth-lowest in this study.

Next is Grand Forks, North Dakota, home of the UND Fighting Hawks. According to our data, the folks in Grand Forks often have hockey on the mind, as the term “hockey” appears in searches on Google 96% as often as the term “food” does. Grand Forks also has the 15th-highest average game attendance, with 97% of its arena filled.

State College, Pennsylvania, where residents can see the Penn State Nittany Lions hit the ice, is the No. 2 hockey town in America. Penn State fans overflow their arena with attendance at 103.10%, the fifth-highest rate for this metric in the study and the highest rate in the top 10. State College has the lowest 2018 violent crime rate in the study, 34 incidents per 100,000 residents, and the seventh-lowest property crime rate, at 762 incidents per 100,000 residents.

Fans of the Clarkson University Golden Knights in Potsdam, NY are the second most intense in this study. The average game attendance represents 30.24% of the town’s population, the sixth-highest rate in this study. Locals search for the term “hockey” on Google 61% as often as they search for the term “food,” the 11th-highest rate. In terms of quality of life. Potsdam ranks in the top 20 for two metrics: median monthly housing costs of $792 and a violent crime rate of 123 incidents per 100,000 residents.

Pittsburgh is the highest-ranked city in this study with an NHL team, the Pittsburgh Penguins. Fans do love to cheer on Sidney Crosby and Evgeni Malkin, and the town ranks eighth for attendance as a percentage of stadium capacity, at 100.80%. Pittsburgh is also one of the bigger cities on our list, and that shows up in terms of dining and entertainment options. There are 723 such establishments per 100,000 residents, the eighth-most of the cities in this study.

St. Paul, Minnesota is the second town with an NHL team to make it into the top 10. Fans fill up the Xcel Energy Center to 97% capacity – the 14th-highest rate for this metric in the study – to see the Minnesota Wild play. St. Paul residents search Google for “hockey” 67% as much as they search for “food,” the seventh-highest rate for this metric in the study. St. Paul has plenty to do when you’re not at the rink, with 592 dining and entertainment establishments per 100,000 residents, the 18th-highest concentration across all 113 cities in our study.

Hershey, Pennsylvania is the only town on our list that hosts a team in the highest minor league in North America, the American Hockey League. The team is a partner of the Washington Capitals, and many Capitals players, including Vezina-winning goaltender Braden Holtby, have played there. Hershey ranks in the top 20 for both fan intensity and quality of life. The attendance at Giant Center represents 61.25% of the town’s population, second most in this study. Hershey has the 26th highest median household income in this study, $62,834.

The final city on this list is Glens Falls, New York, home of the Adirondack Thunder of the ECHL — the third-highest league in North America and hockey’s equivalent of AA baseball. Glens Falls has the ninth-best quality of life score in our study, including ranking 21st and 16th respectively for its low violent and property crime rates with 167 and 1,041 incidents per 100,000 individuals. Glens Falls ranks eighth for average attendances as a percentage of population, at 23.74%.

To find the best hockey towns in America, we analyzed data for 113 cities with a team in either the National Hockey League (NHL), NCAA Division 1 men’s hockey, the American Hockey League (AHL) or the ECHL. We considered eight metrics, falling into two major categories:

Make Sure Your Finances Aren’t Skating on Thin Ice