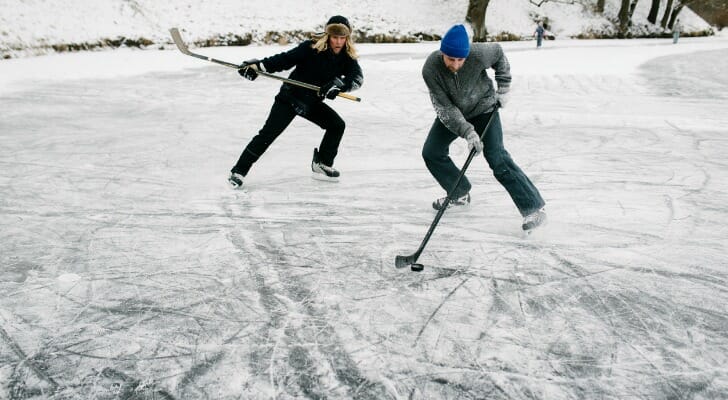 Hockey may not be the most popular sport in America, but it enjoys a strong fan base. Its following is also growing: Since we last did this study, the National Hockey League has even added a new team, the Golden Knights in Las Vegas. That’s the first new team to join the NHL in nearly two decades. Fans also go wild for the other professional leagues in the U.S. and for Division I college hockey. Attending hockey games can naturally take a bite out of your hard-earned savings, but that’s worth it for the residents of some places. To see where hockey enjoys the most support from its fans, we created this list of the best hockey towns in the U.S.

This is SmartAsset’s fifth annual study on the best hockey towns in the America. Read the 2018 study here. 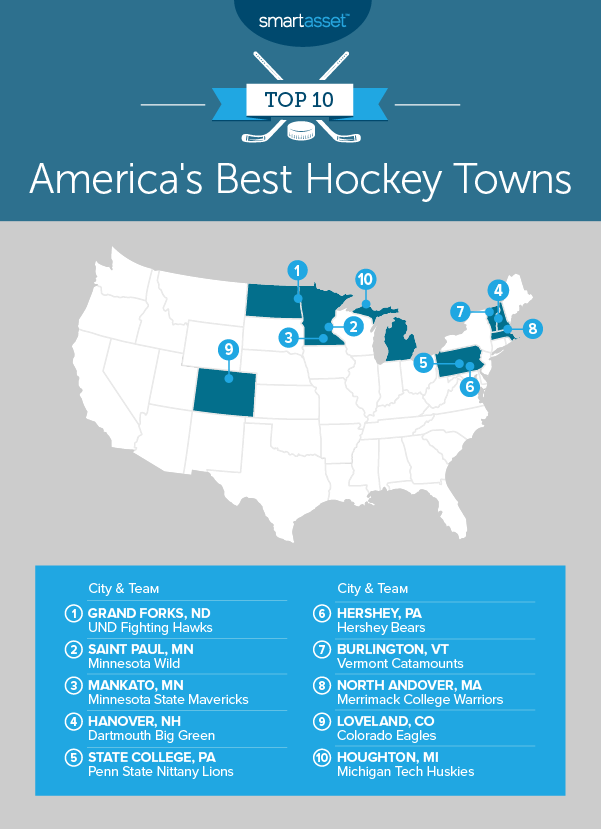 Grand Forks once again claims the title as America’s best hockey town. This is the fifth year in a row that Grand Forks has topped our rankings. Fighting Hawks fans are as dedicated as ever, filling about 98% of the stadium’s seats for the average game. That translates to more than 20% of Grand Forks’ total population attending games.

It’s no surprise fans enjoy going to the games. The Ralph Engelstad Arena, which is where the Fighting Hawks play, is a state-of-the-art facility that some have called the “Taj Mahal of hockey.” According to the arena, all concourses have granite floors, all seats are made of leather and there are nearly 50 luxury suites. But Grand Forks is also a nice place to call home in general. It had the eighth-highest quality of life score of all the hockey towns we considered.

Our data shows that the Minnesota Wild receive some of the strongest fan support in the country. Saint Paul ranks third in our score of fan intensity. The Wild also have more avid fans than other NHL teams. They can expect a packed stadium at games with the third-highest attendance rate in our study. The equivalent of 6.3% of the Saint Paul population shows up for the average game.

Saint Paul also has the 15th-highest quality of life score in our study. If you can’t make the game and need a place to watch, the city is one of the locations in our study that has a large population of dining and entertainment establishments. Another notable distinction: Saint Paul is one of the best cities in the U.S. for women in tech.

Up one spot from last year is Mankato. Mankato residents enjoy a high quality of life, with the fifth-highest quality-of-life score in our study. Their city also has the sixth-highest rate of searching the term “hockey” on Google. The Minnesota State University Mavericks, which call Mankato home, enjoy an attendance rate of 75%. That means 8.75% of the city’s population attends the average game.

Hanover, home of the Dartmouth College Big Green, comes in at number four of our best hockey towns. It has landed a top-five spot in each of the past five years. One reason it ranks well this year is because an average of 24% of the population attends hockey games. This is a top-10 score. However, Hanover’s high ranking is largely thanks to its quality-of-life score. It has the second-highest score in our entire study. The median income is notably high (fifth overall) with low rates of unemployment and crime in the city. For anyone looking to spend his or her golden years watching the Big Green in action, Hanover is also one of the best places to retire in New Hampshire.

State College scores a top-10 spot for the second straight year. It finished number eight last year. The local hockey team, the Pennsylvania State University Nittany Lions, enjoys the seventh-highest attendance rate in our study. Our data shows that attendance averages 102% of the arena’s capacity. It’s also equivalent to having about 14% of the city’s population at a game. State College fans are passionate: Only three hockey towns ranked higher in our score for fan intensity.

After falling out of the top 10 last year, Hershey has made a comeback. The American Hockey League’s Hersey Bears have won more playoffs championships than any other AHL team. The team also has a fan base to match. With more than 9,000 fans at games, the Bears’ arena is at 87% of capacity (equal to 61.5% of Hershey’s population) on average. Only one other hockey town has a higher rate of attendance. Residents here also enjoy the ninth-highest quality-of-life score in our study. Hershey has the lowest property and violent crime rates.

Burlington maintains a top-10 rank mostly because of its loyal fans. The local team, the University of Vermont Catamounts, enjoys a stadium filled to 94% of capacity at the average game, which is a top-25 rate. This average attendance number is also equivalent to 8.84% of Burlington’s population. Overall, Burlington has our sixth-highest score for fan intensity.

Burlington’s quality-of-life score, while not the highest, comes in at 24th. Burlington is also tied for the second-lowest unemployment rate of the 115 hockey towns we analyzed.

North Andover finds itself in the top 10 for the third straight year. It falls slightly from last year’s No. 2 ranking. The Merrimack College Warriors can expect to see their arena at around 90% capacity, with about 2,300 fans going to the average game. The average attendance number equals 7.74% of North Andover’s population.

The city of North Andover is also a nice place to live. It has the 22nd-highest quality-of-life score in our study. Residents here also have the fourth-highest median income in our study. One downside of this is that North Andover housing costs, which include mortgages and property taxes, are on the pricey side.

Skating into the top 10 for the first time is Loveland, the westernmost city in our top 10. This is not entirely a surprise, since Loveland has been in the top 25 in each of the past three years. Based on the data, fans of the Colorado Eagles (East Coast Hockey League) seem to be growing more loyal. The average attendance rate increased each of the last two years. The data shows that the current average attendance is actually higher than the capacity of the Eagles’ arena: As a percentage of stadium capacity, it reaches 101%. If you compare the attendance at the average game to the population of Loveland, more than 7% of the city’s population attends Eagles games.

Loveland is also a great place to live. In fact, we previously found that it’s one of the best places to raise a family in Colorado.

Houghton is a regular on our list of the best hockey towns in America. It has appeared in the top 10 in all five years that we’ve conducted this study. It ranks number five in our fan intensity score. We found that the Michigan Technological University Huskies can expect an average of 3,314 fans at games. That’s equivalent to 42% of Houghton’s entire population, the fourth-highest rate for this metric in this study. People in Houghton Google the term “hockey” only 11% less frequently than they Google “food.” That’s the third-highest rate in the study.

To find the best hockey towns of 2019, SmartAsset pulled data for 115 cities and towns that had a hockey team in either the National Hockey League, the NCAA Division I men’s hockey league, the East Coast Hockey League or the American Hockey League. We ranked all 115 cities across nine total metrics. The metrics fell into one of two categories: fan intensity and quality of life.

To determine the best hockey towns in America, we first ranked each hockey town in all nine metrics. Then we averaged those rankings (giving half weight to each of the two crime-related metrics and full weight to all other metrics) to calculate a score for fan intensity and a score for quality of life. Finally, we averaged the scores for fan intensity and quality of life to create the index we used for our final rankings. The town with the best final average received a perfect 100, while the town with the lowest final average received a score of 0.

We did not include women’s college hockey teams in our analysis, because there was not enough data available. We excluded teams in the National Women’s Hockey League for the same reason, although we hope to include them in the future.

Tips to Help You Manage Your Savings