The Economics of Raising Chickens 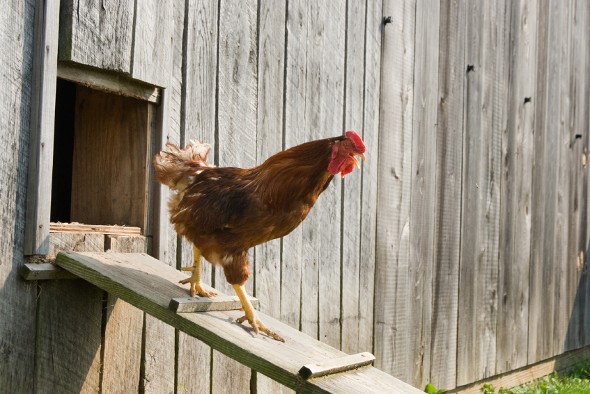 Does the idea of raising your own chickens appeal to you? It’s not for everyone (apartment-dwellers, we’re looking at you) but it can be a rewarding project. If you haven’t taken the plunge yet, you may be wondering whether it’s possible to save money or even make money by raising chickens. Here’s what you should know about the economics of raising chickens.

Why would anyone raise chickens? For one thing, they provide food! For another, they can bring in a little money if you decide to sell the eggs your hens lay.

According to the National Chicken Council, in 2014 per capita egg consumption in the U.S. was 263. That’s the total number of eggs produced, divided by the U.S. population. Egg consumption increased by 4.6% between 2013 and 2014.

The top egg producer in the U.S., Cal-Maine Foods, housed 34.2 million layers (chickens that lay eggs) in 2014. As push-back against factory farming has combined with nostalgia for simpler times, backyard chicken-raising has risen in popularity.

If your backyard is spacious enough, you might want chickens as a complement to other agricultural endeavors. Another advantage to raising chickens is that they provide fertilizer. If you’re growing your own food as part of a larger effort toward a greener home and greater self-sufficiency, having chickens you can move around to fertilize different parts of your property can save you money on organic fertilizer.

There are also other, non-monetary reasons to raise chickens. If you have kids, you might look at raising chickens as a way to teach your kids about responsibility, managing money and taking care of other living creatures.

If you love eggs but object to factory farming, raising your own chickens is a way to ensure that you’re eating eggs that come from happy chickens with room to spread their wings. Plus, research shows that eggs that come from non-factory-raised chickens are more nutritious, with less cholesterol and more omega-3 fatty acids, vitamin A and other nutrients.

The Cost of Raising Chickens

How much does it cost to raise your own chickens? First, you’ll need to ensure that you’re in compliance with local regulations concerning chicken raising. If you’re allowed to keep poultry, you may need to pay for a permit application to keep the birds. For example, in Grand Rapids, Michigan, the application fee for a permit to keep chickens is $50, with an annual renewal fee of $10.

Once you’ve made sure you’re paid up and legal, you’ll need to get the chickens. You can buy sexed chicks for as little as $3 each. That’s important because it’s the only reliable way to make sure you’re getting hens as opposed to roosters. There are mail-order chick businesses or, if possible, you can buy from a farmer in your area.

You’ll have to keep your chicks safe, warm and fed until they’re ready to lay, which can take 6 months or more. And their peak laying days don’t last forever (generally 18 months to 2 years).

You’ll likely get around 6 eggs per week over the course of each chicken’s life, depending on the breed. Hens kept in commercial conditions can be induced to lay more, but that’s much harder to do on a small scale. When the chickens are molting and when daylight hours are shorter in winter, egg laying rates will generally decline.

Let’s say you have a normal suburban backyard and not a multi-acre farm. 6 eggs per week multiplied by 10 chickens gets you 5 dozen eggs each week. Not bad! But once a chicken’s best laying days are behind it you’ll have to decide whether to keep feeding and housing it or slaughter it and use it for making broth. You can also get a rooster and let your chickens replace themselves, saving you the expense of buying new chicks to keep your egg business going.

How many chickens you decide to raise will depend on how much space you have and the scale of operation you’re willing to commit to. You’ll also need some sort of chicken coop or chicken house to keep the little ladies sheltered. These can range from $200 to $4,000.

The good news is that you can feed the chickens scraps and let them forage for their own food. But to make sure they’re getting all the nutrition you need you’ll likely have to supplement with feed. You’ll also need heat lamps to keep the birds warm and nest boxes if the coop doesn’t have built-in boxes. And if you want to use the chickens to fertilize your property you’ll want a mobile chicken shelter that you can move to different areas to spread the love.

Here’s a cost breakdown provided by one chicken-owner: The cost of the building materials for the writer’s chicken coop and chicken run came in at $315. The cost of organic chicken feed and scratch between May 2011 and January 2013 came in at $1,400.

The writer sold $1,175 worth of eggs, for a loss of $540. However, not calculated as “profit” were the many dozens of eggs the chicken owners and their relatives enjoyed in that time period. And at a time when a dozen organic eggs can cost $5 or more, there’s real value in those DIY eggs.

If you can let your chickens truly range free and forage for themselves, you’ll save a lot of money on feed. Ditto if you can make your own chicken feed or use kitchen scraps. Not included in the cost-benefit breakdown above is the fertilizer factor.

If you’re raising chickens and don’t need fertilizer, you won’t benefit. But if you’re growing your own food, having chickens to fertilize your property saves you money that should be included in your personal breakdown of chicken economics. And you can use the chickens to make stock once their laying days have ended, though you’ll have to pay for the privilege if you’re not able (or willing) to slaughter your own birds. 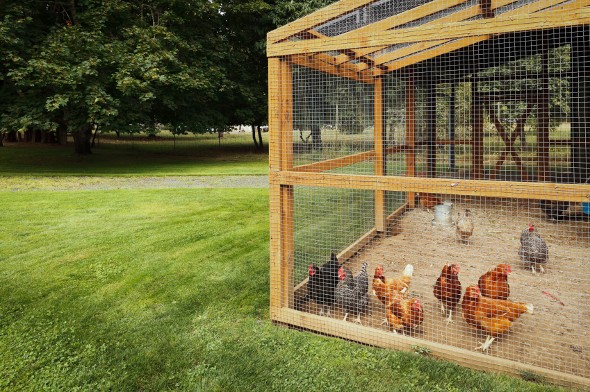 There are some downsides involved in the raising of chickens. For one thing, your neighbors might not be too thrilled, even if zoning rules allow you to keep chickens. For another, chickens can attract predators and pests. That may add another layer of time and expense if you have to put up protective fencing or enlist the services of an exterminator.

And here’s another thing: Hens only lay consistently for a couple of years. After that, they can live for another eight years, providing some entertainment but nothing you can sell. You could slaughter and eat your hens, of course, though they’re not always the best eating chickens. Most people choose to use the hens for stock instead of meat.

Some who begin raising chickens end up taking their birds to shelters, overwhelmed by the task or disillusioned when the chickens stop laying. In fact, shelters have seen a marked increase in the number of chickens they’re receiving, a fact that some attribute to the trendiness of backyard chickens among those who may not know exactly what they’re getting themselves into.

Raising chickens on a small scale is not a get-rich-quick plan. You might not break even at all. As with so many businesses, with raising chickens and selling eggs, scale is a big advantage. If you scale up you can automate more of the business and save money on feed by buying in bulk. One small-scale egg farmer estimated his per-dozen costs at $3.02, and he sells his eggs for $5 per dozen. That’s a pretty small margin. More birds and cheaper feed would help boost the profitability.

If you’re only keeping a few birds, your ability to sell a high volume of eggs is limited, and the ratio of your revenue to your expenses will be lower. It’s probably a good idea to shell out for chickens-raising expenses only if you want to raise chickens as a challenge, or for your own eggs, not because you need money.

If you have a farm that’s producing other salable goods and you’re using the chickens as a side hustle and fertilizer source, you might not care about the slim margin. But selling eggs that net just $2 of profit per dozen isn’t likely to support you on a small scale.

Another big issue to consider is safety. Whether you’re feeding your chickens’ eggs to your family or selling them to strangers you want to be sure they’re safe and sanitary. You may want to shell out for liability insurance to protect against the risk that your eggs could be traced to an outbreak of, say, salmonella. These days, there are special liability insurance policies for those who sell at farmers markets. These can offer $2,000,000 in coverage for as little as $275 per year. If you’re selling to anyone beyond friends and family it may be worth the money to protect yourself.

As a further means of protection for yourself and others, it’s important to be extremely vigilant about the health and sanitation of your hens. Keeping sanitary facilities and performing regular precautionary tests adds to the labor cost involved with raising chickens. 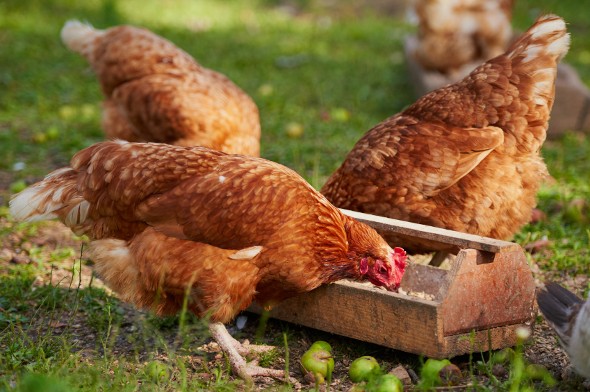 With an average of 5,400 monthly Google searches, “How to raise chickens” is clearly a topic that’s on people’s minds. Raising chickens for your own food and enjoyment is a hobby that’s catching on in America. You don’t have to turn a profit from your hobby, but if you decide you want your hens to make you money, you’ll need to manage your chicken business carefully. As a first step, make sure you’re legally allowed to raise chickens. You can check the chicken-related ordinances in your area here.

Update: So many people reached out to us saying they wanted help with financial planning, that we built a tool to match you with a financial advisor who can meet your needs. First you answer a series of questions about your situation and your goals. Then the program narrows down thousands of advisors to three fiduciaries who meet your needs. You can read their profiles to learn more about them, interview them on the phone or in person and choose who to work with in the future. This allows you to find a good fit while doing much of the hard work for you.