The Cost of Living in Montana 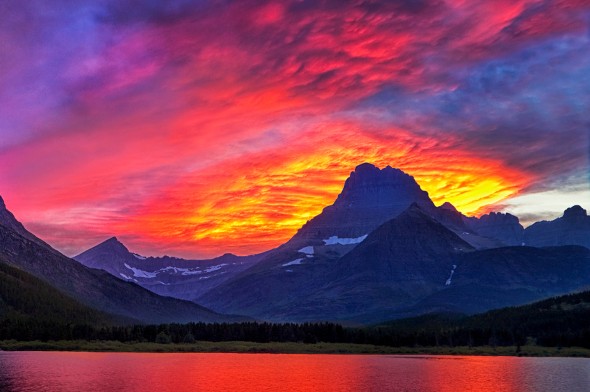 Montana, the Treasure State, is home to some of America’s most spectacular landscapes. It’s a small state in terms of population, with a little over one million residents. In fact, Montana has just 6.8 people per square mile, compared to the U.S. average of 87.4 per square mile, according to the U.S. Census Bureau. So if you want room to spread your legs, Montana might be the place for you. Before you move, though, it’s a good idea to have a sense for the cost of living in the state.

Being that Montana is one of the most sparsely populated states in the U.S., it should come as no surprise that its housing market isn’t especially strong. As a matter of fact, almost 56% of the homes in the state fall between $118,674 and $356,480, according to NeighborhoodScout. This and other factors has resulted in Montana holding a $245,262 median home value as a state.

Although two-thirds of Montana’s residents are homeowners, rentals in the state offer some premium deals. A 2019 report from Apartment List shows the median studio rent in the state is $554. That comes out to $277 less than the national mark. One bedroom apartments ($618) and two bedroom apartments ($785) both follow suit, as they’re $333 and $395 beneath the U.S. median, respectively.

In some of Montana’s bigger cities, the rent can get a bit higher. In Missoula, the studio median rent is $687, while the one bedroom median is $742 and the two bedroom median is $918. Despite these rates being above the state median, they are far below most of the rest of the country. 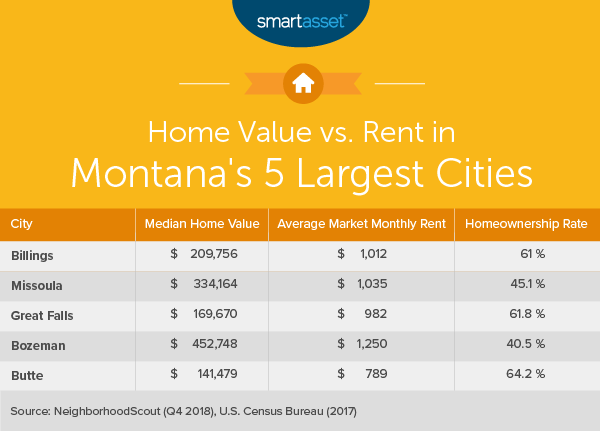 According to 2017 data from the U.S Energy Information Administration (EIA), the average monthly energy bill in Montana is just $94.75, well below the national average of $111.67. That’s not the lowest energy bill across the 50 states, but it’s certainly within the top 10.

If you want to avoid having to own a car, moving to Montana might be a little bit of a struggle. There are exceptions, of course, as bigger cities typically have public bus service. In Missoula, the Mountain Line bus service is currently zero-fare. Bozeman’s Streamline bus is also free. The fare on Great Falls’ bus service costs a minuscule $1.

In general, though, Montana is a driving state. According to May 2019 data from GasBuddy, a gallon of gas in Big Sky Country goes for an average of $2.85, which is just below the $2.92 national mark. The average commute time in the state is just 17.8 minutes, which is much shorter than the national average of 26.4 minutes, based on reports from the U.S. Census Bureau.

Montana’s grocery prices are above average for a U.S. state. Compared to a national average indexed at 100, Montana’ groceries come in at 104.6, according to the Missouri Economic Research and Information Center.

Based on calculations by MIT, the living wage in Montana for a single adult with no children is $23,671. Of those wages, MIT estimates that $3,573 goes to food purchases. That works out to more than 15%, which is around 2% above the national average.

Montana has no sales tax, which is a huge long-term benefit. The state does maintain taxes on beer, liquor, wine and cigarettes, though.

Montana’s income tax system is progressive, with marginal income tax rates that range from 1.00% to 6.90%. As far as taxes on property go, the average effective property tax rate in Montana is just 0.85%, well below the national average of 1.19%. Rates range from 0.47% in Fallon County to 1.56% in Blaine County.

As of the beginning of 2005, Montana has no estate tax.

If you want to go back to school in Montana or send your kids to a state school, you’re in luck. Based on reports from CollegeCalc.org, tuition at Montana’s public universities have an average cost of $6,879 for the 2017-2018 academic year. That works out to be $7,233 less than the national average.

Check out the table below to see how the average tuition and fees at Montana’s public schools stack up against those in other states. 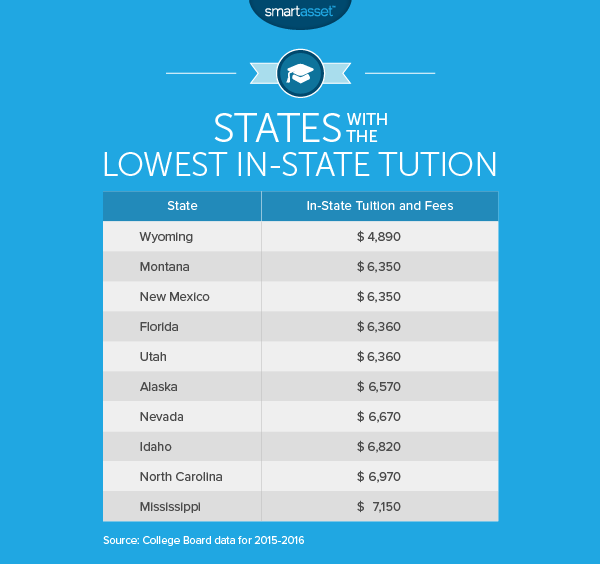 Montana is known as a place for outdoor enthusiasts. A seven-day vehicle permit for entrance to the renowned Glacier National Park will cost you $35. That rate holds for summer admission between May 1 and October 31. In winter, the fee drops to $25 for admission between November 1 and April 30. The rate for individuals arriving on foot, by bike or as part of a commercial group is $20 in summer and $15 in winter. If you live in the area, you can get an annual pass for $70.