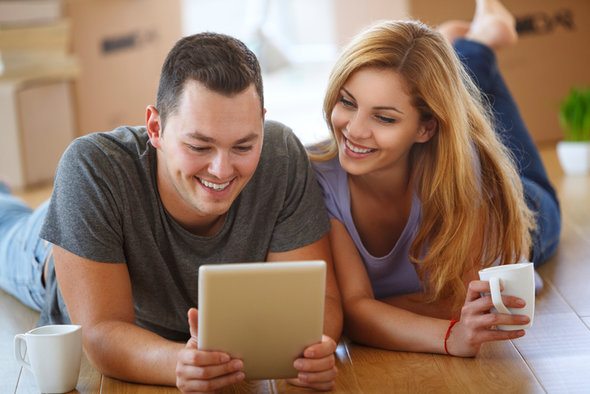 Looking to buy a home? Compare mortgage rates in your area.

To determine the best places to live on a $55,000 salary, we began by creating a list of every U.S. city where the median household income is between $50,000 and $60,000. We looked at factors like the median housing costs, the number of entertainment establishments and civic establishments per 10,000 residents, the quality of local healthcare, the percent of income going to housing and the unemployment rate. For the full list of our metrics and where we got our data, read the data and methodology section below. 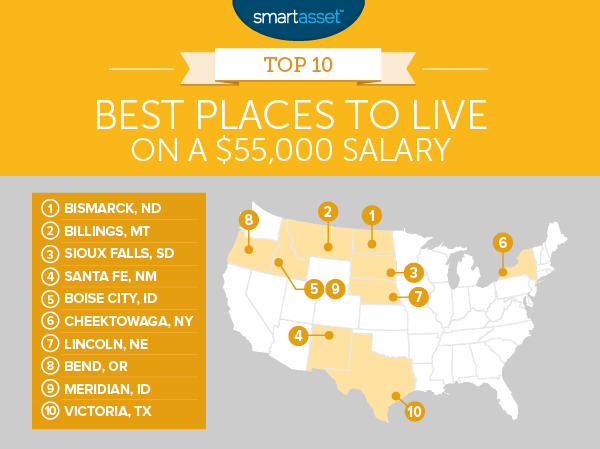 If you are living on an annual income of $55,000, it is hard to go wrong in Bismarck. The city has seen impressive growth in the recent past, thanks to an unemployment rate of only 2.1%. Housing costs here, despite the growth, aren’t much of a problem, either. The median housing cost in Bismarck is only $854 per month. So if you earn exactly $55,000, the median monthly housing cost would eat up 18.6% of income. That’s well below the maximum of 30% that many financial experts recommend.

Billings comes in second. If you do move here on $55,000, you likely won’t have to fork over too much on housing costs. The median monthly housing cost of $944 would only equal 20.6% of that $55,000 income. The unemployment rate is also really low (3.9%), putting upward pressure on wages. Billings’ median household income in the area is the highest in the top 10. You may also get quite a lot of entertainment value out of your $55,000. Billings has the 11th-most entertainment establishments per 10,000 residents in the country.

Sioux Falls shares many features with its Great Plains neighbors, Billings and Bismarck. Like those cities, Sioux Falls offers residents short commute times to work and its unemployment rate is low. The biggest difference between the three is that Sioux Falls residents are slightly less wealthy on average, earning $53,802 per year. The city ranked 58th in that metric in our study. However Sioux Falls may surpass the other two in terms of its quality of life. Sioux Falls ranks better than both other cities in the number of entertainment and civic establishments per 10,000 residents.

New Mexico’s capital is one of the more expensive cities in our study, with median monthly housing costs equaling $987 per month. That’s the third-highest in the top 10. For households earning $55,000, 21.5% of their income would be dedicated to paying the median housing costs. But quality of life factors make Santa Fe worth it. Santa Fe has the fourth-most civic establishments per 10,000 residents, meaning there are plenty of chances to get to know your neighbors and the 12th-most entertainment establishments per 10,000 residents in the country.

The capital of Idaho is the fifth-best place to live on a $55,000 salary. If you earn exactly $55,000, Boise’s median monthly housing costs of $922 will consume only 20% of your income. That means plenty left over for fun and social activities. Boise has around 12.8 entertainment and civic establishments per 10,000 residents. And if short commutes are important to you, you’ll likely appreciate living in Boise where the average commute is only 18 minutes.

One of the smallest cities to appear in our top 10 is Cheektowaga, with a population of 76,075. If you are looking to maximize your income, Cheektowaga may be the destination to head to. Median housing costs are only $806 per month or 17.6% of income for someone earning a $55,000 salary. It also has the third-lowest poverty rate in the top 10 at 11.1%. While Cheektowaga is a little light on entertainment establishments (there are around four per 10,000 residents), there’s plenty of outdoor activities available in upstate New York.

The capital of Nebraska is another great option for someone earning a salary of $55,000. Residents here also have access to 13.6 civic institutions per 10,000 residents, which offers neighbors a great chance to get to know each other. This city is especially attractive for families, thanks in part to the low median monthly housing costs of $877 per month. Plus, workers in The Star City face daily commute times of only 18 minutes on average, the 11th-lowest in our study.

If you love the outdoors, Bend is an especially enticing destination. The city and its surrounding region are known for mountain biking, hiking and fishing. There are also 18.9 civic and entertainment establishments per 10,000 residents in the area, the fifth-highest in the top 10. Plus, Bend has the second-lowest commute time in the study.

Last year, SmartAsset found that Bend was one of the top 10 boomtowns in the U.S. As a result, housing costs may be on the rise. Currently Bend has the highest median housing costs in the top 10 at $1,089.

Meridian is the third-largest city in Idaho and the fastest-growing. One reason why the city is growing so fast, and why Meridian is one of the best cities to live on a $55,000 salary, is the low unemployment rate. Only 5.5% of residents are unemployed. That rate is good enough for 12th in our study. Meridian also received high marks for its poverty rate. At 10.7%, it’s the lowest poverty rate in our top 10. Meridian is a touch on the expensive side, however. The city’s median housing costs would eat up 23.4% of a $55,000 income.

Victoria, Texas rounds out our top 10 best places to live on a $55,000 salary. This city ranks top 10 in three metrics: median monthly housing costs, percentage of income going to housing and average commute time. The city offers promising economic opportunities as well, with unemployment and poverty sitting at 7.2% and 13.9% respectively. However, one score, quality of local healthcare, really hurt Victoria’s overall ranking. Victoria ranks 114th in that measure, the worst single score for any city in the top 10. 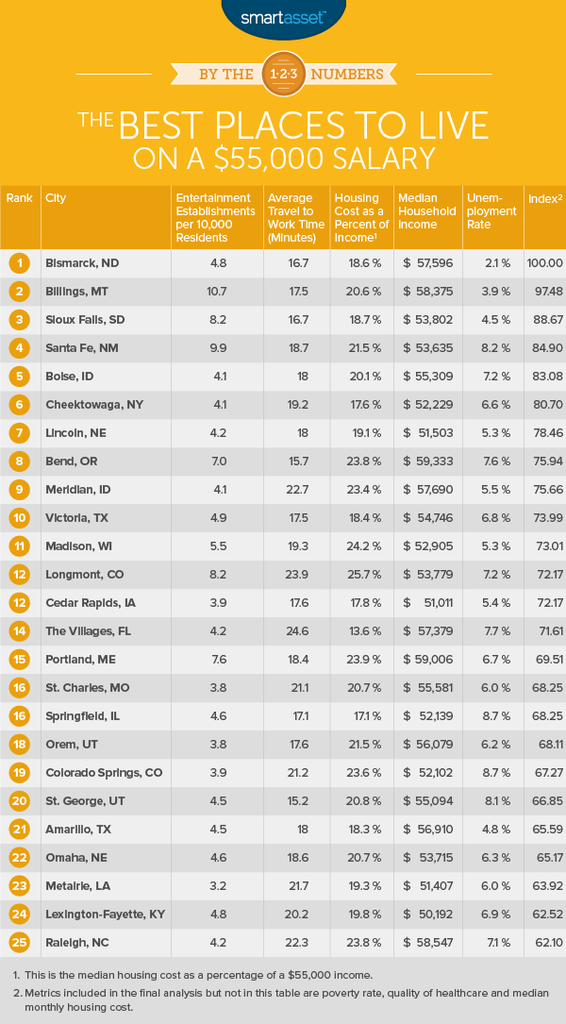 In order to find the best cities to live on a $55,000 salary, we first created a list of all the cities where the median household income was between $50,000 and $60,000. We did this in order to find cities where living on a $55,000 salary was within the range of how the average resident lives. This left us with a list of 116 cities which we ranked across the following nine metrics: