Cities Where the Median Income Buys the Most Home 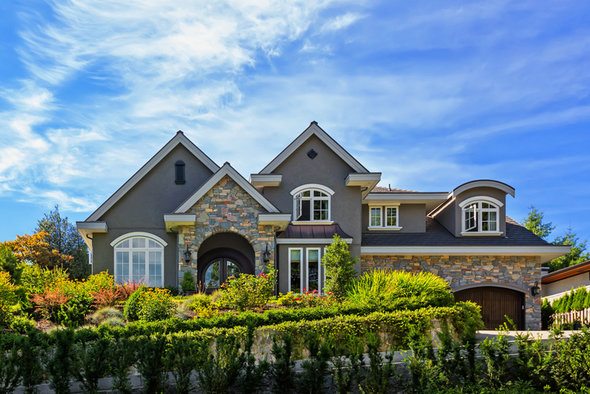 Worried that homes in your area are becoming unaffordable? You may be right. Home prices across America are on the rise. But home prices alone aren’t enough to determine affordability. It’s also important to consider how much people in the area earn. In some places homes may have fairly low sticker prices but the average resident may not earn much. Buying a home will still be a challenge. Below we look at the places with the right balance of average home price and average income to find the cities where the median income buys the most home.

Find out how much home you can afford right now.

In order to find the places where the median income buys the most home, we looked at data on median household incomes and compared that to average price per square of homes. Check out our data and methodology below to see where we got our data and how we put it together. 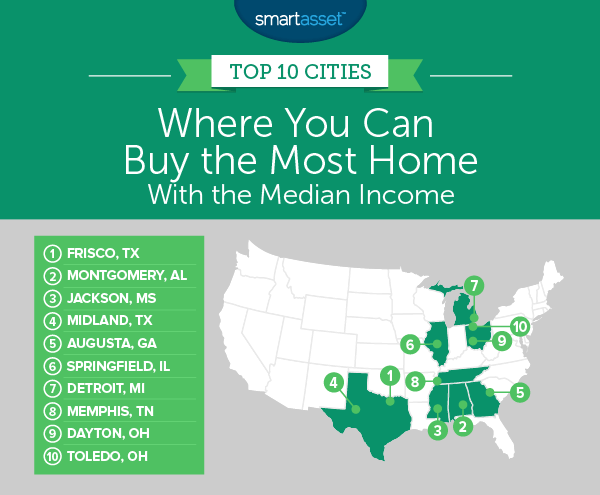 Frisco serves as a home base for many high-earning professionals who work in the Dallas metro area. Our data shows that the average household in Frisco earns around $123,000 per year. That’s by far the highest median income in the top 10. It’s also significantly more than neighboring cities like Dallas, where the median household earns just under $46,000 per year. Overall, with Frisco homes having an average price of $131 per square foot, we see that the average family’s yearly income could buy around 938 square feet of home.

The housing market in Montgomery, Alabama is very affordable relative to other cities in the country. According to our data, the average household earns around $42,000 per year. That sum could pay for a 827-square-foot home with just one year’s income. In terms of value per square foot, Montgomery has the fifth-cheapest average housing in the top 10.

Another Southern city takes third. Homes in Jackson cost about $40.40 per square foot, according to our data. This means the average household in Jackson, who earn just over $32,000 per year, could buy an 803-square-foot home, with one year’s income. Overall Jackson has the second-lowest average home prices in our top 10.

Residents in Midland, like Frisco ranked above, tend to be high earners. On average our data shows the households in Midland earn $80,700 per year. In comparison that’s almost twice as much as the average Montgomery household earns. Homes in Midland are also more expensive than they are in Montgomery. The average home costs about $107 per square foot, meaning with one year’s income, the average Midland household could buy a 752-square-foot home. One thing to keep in mind however is that prices in Midland may be on the rise. We recently found that Midland is growing at one of the fastest rates in the country.

Homes in Augusta, one of the most undervalued cities in the country, cost about $55 per square foot. However, the average household in Augusta does not make quite as much as some other cities in our top 10. One year of Augusta’s median household income ($41,190) could buy 741 square feet of the average home.

At $35 per square foot, Detroit homes are the most affordable in the country, on average. The second-most affordable homes, which can be found in Jackson, Mississippi are 14% more expensive in terms of price per square foot on average than Detroit. Unfortunately, despite having access to some affordable homes, the average Detroit household doesn’t earn that much when compared to many other places. The median household income is $25,980, according to Census Bureau data. This means if average Detroit households put one year of income toward buying a home, they could buy a 740-square-foot home.

With $36,908 (the median household income in Memphis) in your pocket, you could afford to buy about 730-square-feet of the average home. Homes in the Memphis area, according to our data, go for about $50.50 per square foot. That’s more than some other Southern cities like Jackson, but also much less than some others like Nashville.

The average home in Toledo sells for slightly more than those in Dayton: $50 per square foot. That means if you came to Toledo with $100,000 bouncing around in your pocket, you could buy a 2,000-square-foot home. But the average Toledo household earns $35,289 per year. We estimate that amount could buy a 705-square-foot home. If you’re thinking about buying in Toledo, watch out, Ohio has some of the highest property taxes in the country. 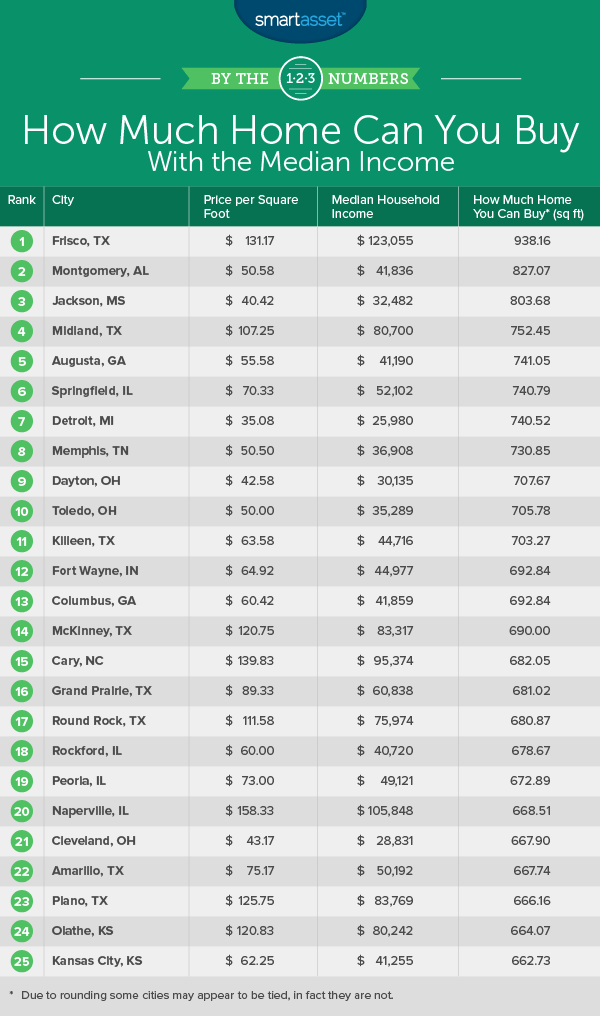 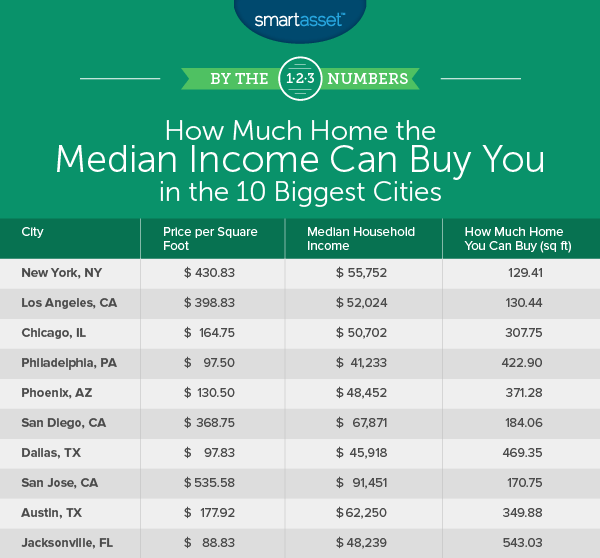 Homes in the Big Apple are expensive. But New Yorkers earn a lot, right? It’s true that many earn more than most Americans, but New York households, on average, don’t earn enough to buy much home in New York. If the average NYC households used one year of income ($55,752), they could buy a 129-square foot home. Certainly not enough house for a family!

Residents in the City of Angels do not fare much better than their New York counterparts. Average homes in L.A. go for about $398 per square foot, almost 10x as much as Jackson, Mississippi. The median household income in Los Angeles ($52,024) would buy 130 square feet of home.

If you’re currently looking for a home in San Diego, you know how expensive it has gotten. Our data shows that the average home in San Diego costs about $368 per square foot. For comparison’s sake, cities like Bellevue, Washington and Anaheim, California cost about the same. Average San Diego residents also don’t earn enough to make up for these high home prices. We estimate that the average household could buy only 184 square feet of home.

If you could live in any big city in the country and want to maximize the house you could afford, Dallas is probably a good place to choose. Homes here go for about $97 per square foot on average, and on average Dallas residents earn just under $46,000. Combining those two numbers, we see that the average Dallas income could buy 469 square feet of home.

San Jose is the most expensive big city on our list. On average, homes go for over $535 per square foot. But thanks to the tech boom, San Jose residents are also some of the highest earners in the country. With an median income $91,451, the average San Jose household makes more than the average Phoenix household and Philadelphia household combined. Overall, we estimate that one year of median household income would buy 170 square feet of San Jose home.

The final big city in our list is the most affordable. Homes in Jacksonville, Florida go for under $90 per square foot on average. The average household earns $48,239 per year. With that sum, we estimate that the average Jacksonville household could buy 542 square feet of home.

To find out how much home you can buy with the median income, we took the median household income in each city and divided it by the average home value per square foot in each city. Data on average home value per square foot comes from Zillow and is from 2016. Data on median household income comes from the Census Bureau’s 2015 1-Year American Community Survey.

Tips on Buying Your First Home

When buying your first home it’s important to make sure you have done the math. Our mortgage calculator can help you break down the complex costs, like how much you can expect to pay in property taxes, home insurance and your monthly mortgage payments.

Making a large down payment may be good idea, as well. Remember a bigger down payment can unlock lower interest rates, which means over the life of the mortgage you’ll pay less. The recommended down payment is around 15% – 20% of the total home value.

Finally, stay patient and don’t buy the first home you like. It’s a good idea to shop around and make sure you love the neighborhood. After all it may be the place you spend the rest of your life.