The Least-Stressed Cities in America in 2015

Feeling stressed out? You’re not the only one. A 2014 study by the Robert Wood Johnson Foundation and the Harvard School of Public Health found that half of all American adults dealt with a major stressful event over the prior year. And that doesn’t even consider the cumulative effect of the smaller daily stresses of modern life, such as credit card bills, children, mortgage payments and (ugh) keeping up with social media.

Yet, in some peaceful corners of the country, life moves at a slower pace. Work hours are reasonable, traffic isn’t too bad and people smile at each other on the sidewalk. Where are these low-stress sanctuaries, you ask? SmartAsset has the answer.

In order to find America’s least-stressed cities, SmartAsset collected city- and county-level data on the 500 largest cities in the country. We considered nine separate metrics in total, which can be generally subdivided into two categories, as described below. 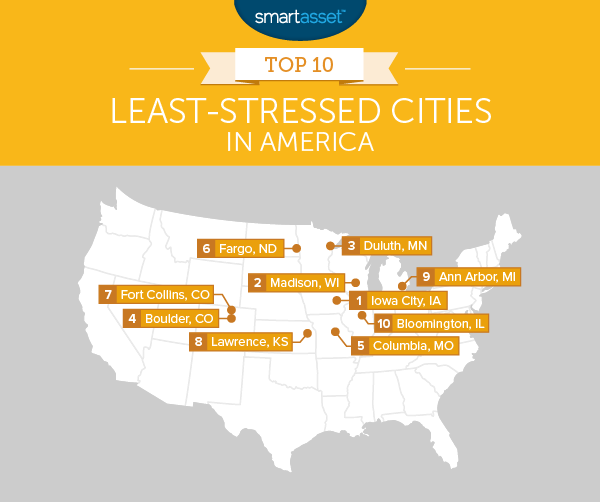 The largest single employer in Iowa City is, by far, the University of Iowa. According to the city’s 2014 Comprehensive Annual Financial Report, the University of Iowa employs over 30,000 people in Iowa City. The next largest employer (the Iowa City School District) employs just 1,700. In short, the university has an outsized effect on the local economy and, therefore, local stress levels.

Our analysis found that Iowa City has the 16th lowest bankruptcy rate of any major U.S. city, with just 8 personal bankruptcies for every 100,000 residents in 2014. It also has the 10th lowest unemployment rate and the third shortest average work-week, at a mere 33.4 hours. In comparison, the average work week in Chicago is 38.5 hours.

While Madison, like Iowa City, is home to a major public university, higher education and Big Ten sports are not the only shows in town. Madison also serves as the state capital of Wisconsin. Just as the University of Wisconsin is a source of well-paying, stable (and, therefore, relatively low-stress) jobs, so is the state government.

Located along the far western tip of Lake Superior, Duluth is the economic hub of an area that includes northern Wisconsin and the western portions of Michigan’s Upper Peninsula. It is home to the University of Minnesota-Duluth, the third largest employer in the city after the St. Louis County government and Essentia Health.

It is also a popular tourist destination, serving as a gateway to Minnesota’s North Shore and the Superior National Forest. Perhaps those outdoor amenities help the people of Duluth unwind. Or perhaps it’s just a good night’s sleep. According to data from Jawbone, residents of St. Louis County (in which Duluth is located) get 7.2 hours of sleep per night, fifth highest of any U.S. county.

Boulder has long been recognized as a destination for those seeking a low-stress lifestyle. In the 1960s, the area gained a reputation as a haven for hippies. While that era may be over, certain elements of the hippie movement maintain a hold on the Boulder culture. It remains one of the most popular cities for outdoor-enthusiasts and a top choice for users of recreational pot.

The data reflects this easy-going culture. Boulder ranked in the top 20 of the 500 largest cities in the country for its short work-week and its high concentration of entertainment establishments, while Boulder County ranked 19th for its average nightly hours of sleep.

A 2001 study on commute times found the ideal commute should last about 16 minutes. Any longer than that and the stress of driving in traffic (or sitting on a crowded bus) begin to take a toll. Any shorter and your hair might still be wet when you reach the office in the morning. In Columbia, the average commute is 16.5 minutes long, in other words, just about perfect. That’s one less stressor for Columbians to worry about and a major reason it ranks as the 6th least-stressed city in the U.S.

Over the past several decades, even as the rest of the country has seen its fair share of economic ups and downs, the Fargo economy has remained strong. At the depths of the most recent recession, Fargo’s unemployment rate never topped 5% and the city’s housing market was largely untouched by the national foreclosure crisis.

That type of stability can put a lot of minds at ease, as workers and homeowners don’t have to worry about losing their job or their home. Indeed, job losses and foreclosures are two of the major reasons stress levels spike during a recession. Not so in Fargo, at least in recent history.

According to the Mayo Clinic, “virtually any form of exercise, from aerobics to yoga, can act as a stress-reliever.” That’s good news for Fort Collins, which ranks as one of the most active cities in the United States. Some 67% of the city’s population gets the recommended amount of weekly exercise (150 minutes of moderate physical activity or 75 minutes of rigorous physical activity). That’s the fourth highest percentage of the 500 largest U.S. cities.

Lawrence is the quintessential college town. Subdued and relatively empty in the summer, it comes to life each fall when the students arrive, boosting the city’s population by more than 20%. The University of Kansas is easily the largest employer in the city, providing a stable of  generally well-paying, low-stress jobs at its main campus and at the KU Medical Center.

The name “Ann Arbor” refers to the matriarchs of the city’s two founding families as well as the abundance of trees throughout the area. Indeed, those looking for a shady place to read a book or take a nap should have no problem finding one in A-Squared. Nichols Arboretum and Gallup Park are local favorites for a little outdoor R&R, while University of Michigan students prefer the comfortable convenience of the Diag.

In many parts of the country, high housing costs place a strain on budgets, forcing families to make tough financial decisions and contributing to generally high stress levels. Not so in Bloomington. In this central Illinois city, average annual housing costs consume just 17.3% of median household income. That is the third lowest ratio of the 500 largest cities in the U.S. 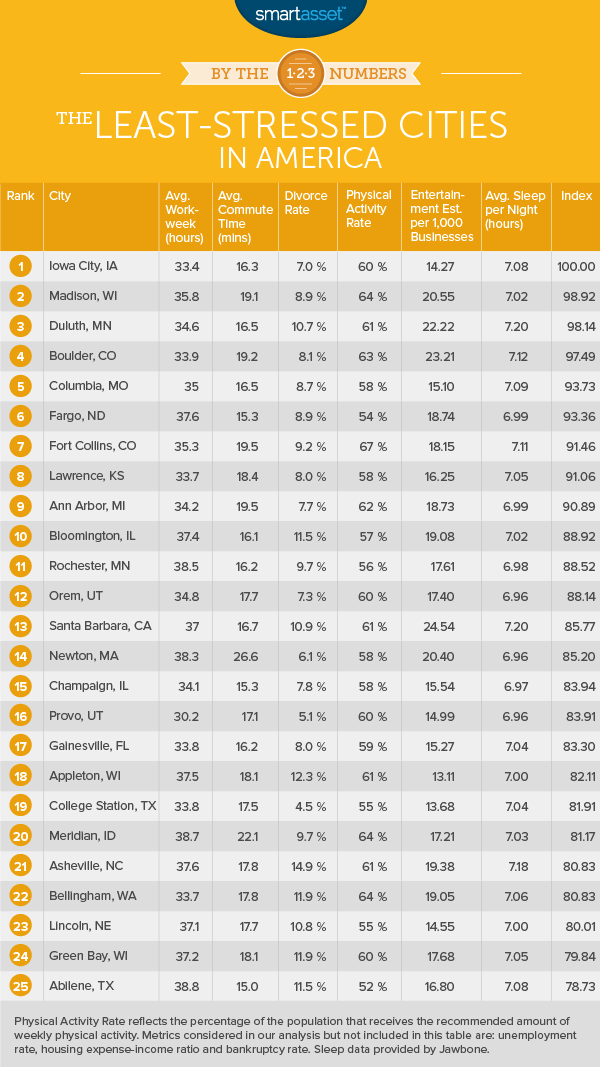 Read the 2016 version of SmartAsset’s study on the least-stressed cities in America.

1. Note for stressed-out college students who object to these rankings: think you don’t get any sleep now? Wait until you have kids.