The Cities with the Lowest Startup Costs – 2015 Edition 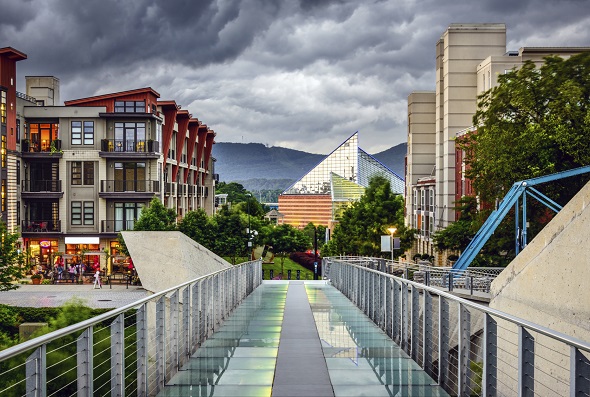 Starting a business isn’t cheap. One of the biggest challenges for most entrepreneurs is raising capital to fund the early stages of their company, before it has the customers and revenue to support itself. For this reason, founders often take out a small business loan or seek seed investments from angel investors to get things under way.

This is SmartAsset’s first annual study of the cities with the lowest startup costs. Read the 2016 version here.

Indeed, one of the easiest ways for a startup to fail is for it to exhaust its early-stage funds before it has a chance to build up enough momentum to keep going. Even the most promising ideas and well-conceived business plans need time to work.

For this reason, it’s essential for early-stage businesses to keep their costs to a minimum. A sparkling new multi-billion dollar office may make sense for the Apple of today, but we shouldn’t forget that Steve Jobs started the company in a garage.

To find the cities with the lowest startup costs, SmartAsset collected data on the typical costs of starting and running a business in 80 of the largest cities in the country.1 We calculated the total expected startup costs over the first year of operation for a company in each of these cities, factoring in the following expenses:

Because every new business will face its own set of circumstances and its own unique expenses, we made a number of assumptions in our study that may not apply to all startups. The total costs that we calculated for each city are not an average. Rather, they are a point of comparison, looking at how an identical, generic startup would fare in each of the 80 cities in our study. 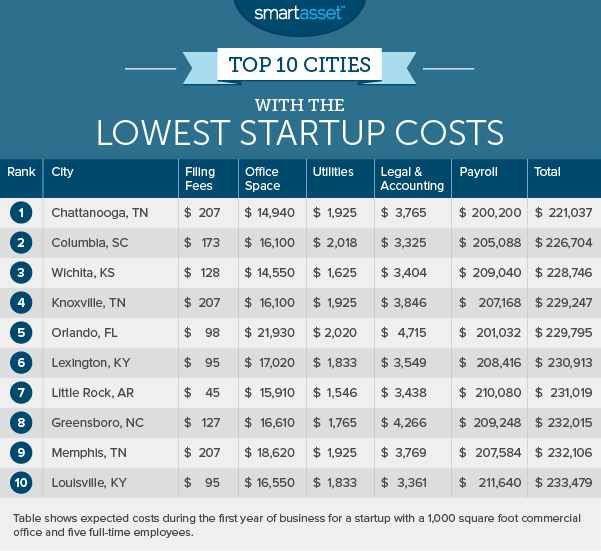 One of the first cities in the country to invest in fiber-optic internet service, Chattanooga’s ultra-fast internet has become a major draw for businesses. Indeed, the city even earned a new nickname: Gig City. This is a reference to the gigabit-per-second download speeds available in Chattanooga.

High speed internet is great, but for many startups it is far from top priority. A young business can deal with the occasional internet outage, it can’t weather exorbitant costs. In Gig City, however, it isn’t an either-or.

In addition to the aforementioned gigabit internet, SmartAsset’s research found that Chattanooga has some of the most affordable office space in the country. A one year lease on a 1,000 square foot office in Gig City would cost less than $15,000 on average.

As the home of University of South Carolina’s main campus, Columbia has a fairly well-educated workforce, a key draw for businesses in today’s knowledge economy. Nonetheless, it is fairly inexpensive to start a business in Columbia. For example, our analysis found that legal and accounting costs in the first year would be 26% lower in Columbia than the national average.

The only city west of the Mississippi to rank in the top 10, Wichita offers young businesses some of the most affordable office space of any major U.S. city. According to Reis, Inc., the average price per square foot of office space in Wichita is just $14.55 per year. At that rate, a business could lease a 1,000 square foot office for $14,550 annually. Compare that with New York City, where the same office would cost around $66,110.

Knoxville is located in eastern Tennessee, near the Appalachian Mountains. It is home to the main campus of the University of Tennessee, as well as the world headquarters of the Regal Entertainment Group, operators of one of the country’s largest chains of movie theaters.

While aspiring to Regal’s multi-billion dollar revenue stream, startups in Knoxville can appreciate the city’s low costs of business. We found that a business with five full-time employees and a 1,000 square foot office would have first year costs of about $230,000 in Knoxville.

There are a number of resources in Orlando for entrepreneurs looking to start a business. UP Orlando hosts a weekend for current and future startup founders to discuss ideas and lend support to one another (Startup Weekend Orlando is November 21-23 this year).

Orlando Tech helps startups in the world of technology connect and grow. The Creative Village Orlando is a 68 acre area in downtown Orlando that provides a home for, among other things, high-tech and digital media companies.

In addition to those resources, startups in Orlando will enjoy some of the lowest business costs of any major U.S. city. Startups that file as an LLC won’t have to pay any state taxes on their profits, as the state of Florida does not have a personal income tax. (LLC profits are treated as income to the shareholders.)

Kentucky’s second largest city, Lexington is among the most well-educated cities in the U.S. According to the U.S. Census Bureau, over 40% of the city’s population has a bachelor’s degree. That means new businesses have many options when looking for employees with the education and ideas to help their startup flourish.

Startups in the Arkansas capital save on costs in a number of ways. Arkansas has the lowest business filing fees of any state in the U.S. It costs just $45 to submit the necessary paperwork to become an LLC in Arkansas.

Own any stocks? Calculate what your capital gains tax will be.

Likewise, the cost of utilities in Little Rock are quite low. The annual total cost of gas and electricity for a business with a 1,000 square foot office in Little Rock would be around $1,546, representing savings of several hundred dollars per year as compared to most of the other cities in our study.

According to the Tax Foundation, the top corporate income tax rate in North Carolina is just 5%, among the lowest in the U.S. For incorporated startups that expect to start churning out the profits quickly, that is one reason Greensboro may be an attractive destination. Meanwhile, business owners who don’t incorporate will face a flat personal income tax rate of 5.75% in North Carolina.

The third and largest Tennessee city to rank among the top ten cities with the lowest startup costs, Memphis promises young businesses low prices on office space and access to a less expensive labor market.

One reason incomes in Memphis are lower than they are elsewhere in the country is that the cost of living in Memphis is significantly lower than in many other major cities. Workers don’t need to earn as much to cover housing costs and other basics. This is especially important for startups, which frequently offer their early employees stock in the company in lieu of a fat salary.

The state of Kentucky supports the funding of small businesses through a matching funds program known as SBIR-STTR, which stands for Small Business Innovation Research (SBIR) and Small Business Technology Transfer (STTR). This program awards grants of up to $500,000 to innovative startups in Kentucky. Last year, four Louisville companies were recipients, including a startup called Advanced Energy Materials, which originated at the University of Louisville.

The Cities with the Highest Startup Costs

Along with the cities where startups face the lowest cost of business, we also wanted to find the parts of the country where young companies will need the most capital to get going.

We should note that just because the cost of entry is high in places like San Francisco and New York doesn’t mean starting a business in one of those cities is bad idea. Indeed, part of the reason the cities listed below are so expensive is that so many companies want to be there. What they lack in cheap office space, they can often make up for in talent, market reach and other factors.

Nonetheless, startups in these cities should make sure they have ample funding so that they have enough time to build a successful business. 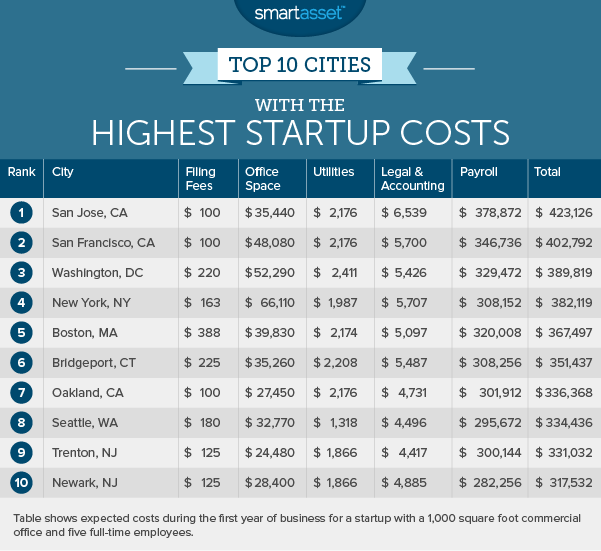 Check out our 2016 study of the cities with the lowest startup costs.

1. The number of cities in our study was limited by the availability of data on commercial real estate rates and legal costs.