The U.S. stock market hit record highs leading up to Thanksgiving in 2020. Two days before the holiday this year, the Dow Jones and S&P 500 indexes broke 30,000 and 3,600 points, respectively. While some stock analysts and investors are concerned that these prices belie a frothy market soon set to pop, others speculate that highs will continue over the next month. In the investing world, the uptick in stock market performance at the end of the year is commonly referred to as the Santa Claus rally, gifting investors jolly gains in their portfolios.

Researchers have suggested a variety of theories as to why the Santa Claus rally happens. Some cite a general feeling of optimism and the investment of holiday bonuses. Others offer more concrete reasons, including tax considerations or the idea that more bullish retail investors tend to take control of the market when institutional investors go on vacation over the holidays. While the exact reasons a Santa Claus rally does or does not occur are difficult to determine, SmartAsset decided to examine how often these rallies happen and their typical magnitude.

In this study, we considered the performance of the S&P 500 during the last five trading days of December and first two trading days of January. Though time frames and market indexes vary when studying the Santa Claus rally, we used these frames of reference for two reasons. First, this time period follows the Stock Trader’s Almanac’s definition of Santa Claus rallies. And second, the S&P 500 is considered by many investors to be the most accurate representation of the general performance of the stock market. Beyond looking at general effects the Santa Claus rally has on the market, we studied how recessions have historically affected both the odds of Santa Claus rallies as well as their scale. For details on our data sources and how we put the information together to create our findings, check out the Data and Methodology section below.

On average between 1950 and 2020, the S&P 500 rose by 1.33% during the last five trading days of December and first two of the following new year. This is significantly higher than the expected probability that the S&P 500 would increase by that amount over a seven-day trading period. According to Trefis, a stock price and analysis company, there is about a 31% chance that the S&P 500 will increase by 1.33% over seven trading days. In other words, Santa Claus rallies happen more than twice as often as one would expect. 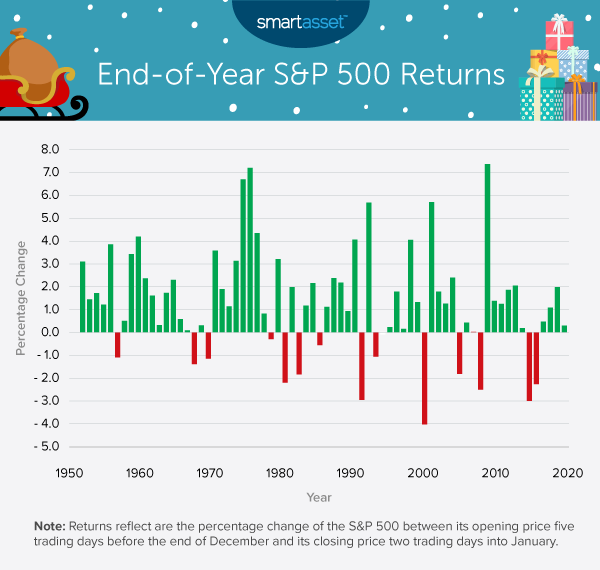 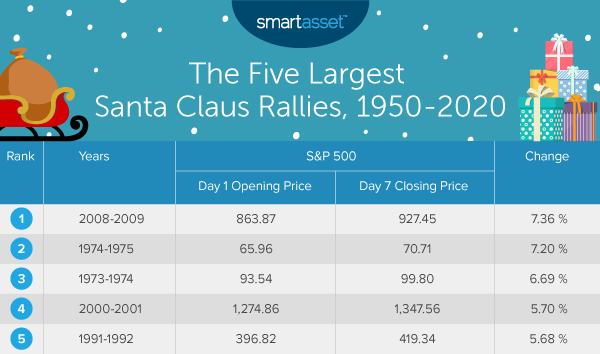 How Do Recessions Affect the Santa Claus Rally?

Between the beginning of 1950 and early 2020, there were 10 total periods a Santa Claus rally could have taken effect during a recession. Out of those periods, a rally occurred seven times. Given the small sample size, the rate of Santa Claus rallies during recessions is roughly comparable to the typical rate of 79%.

As noted previously, while Santa Claus rallies take place about as often during recessions as they do generally, they tend to have larger positive and negative returns. The three largest Santa Claus rallies (2008-2009, 1974-1975 and 1973-1974) occurred during recessions, as did the worst end-of-year periods (1990-1991 and 2007-2008). The table below shows recessions that overlapped with the end of the year as well as the S&P 500 returns during that time. 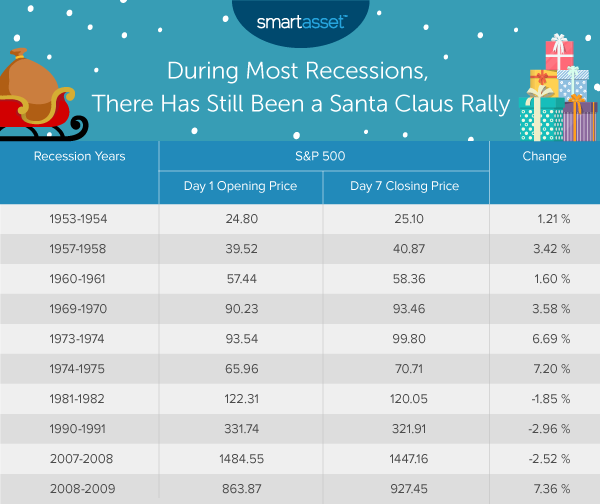 Data for this study comes from Yahoo Finance. We looked at the S&P 500 price index, considering the opening price five trading days before the end of December and the closing price two days into the following new year. For each year between 1950 and 2020, we calculated the percentage change between those two figures.

Tips for Maximizing Your Investments at the End of the Year