The Economic Costs of Influenza 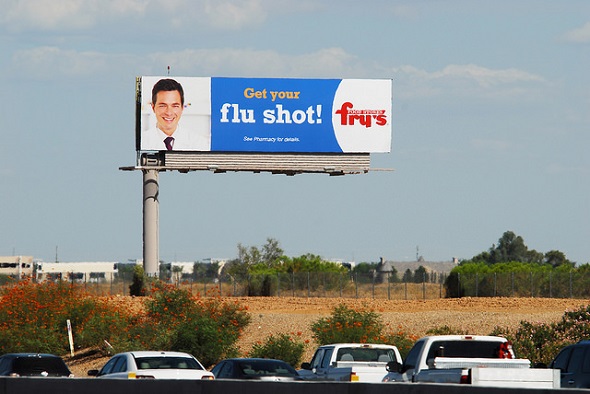 In the United States, flu season typically stretches from November to April, peaking in January or February. Each year, somewhere between 5% and 20% of the population will come down with influenza, and around 200,000 people will be hospitalized because of the virus.

Needless to say, those are huge numbers, and the medical community has responded in kind—the influenza vaccination annually reaches over 100 million people in the U.S. (for the 2014-2015 flu season, 150 million doses were manufactured). But what is the economic cost of the flu virus? Using data from the CDC and the Google Flu Trends database, SmartAsset looked at the impact influenza has had on productivity in recent years. 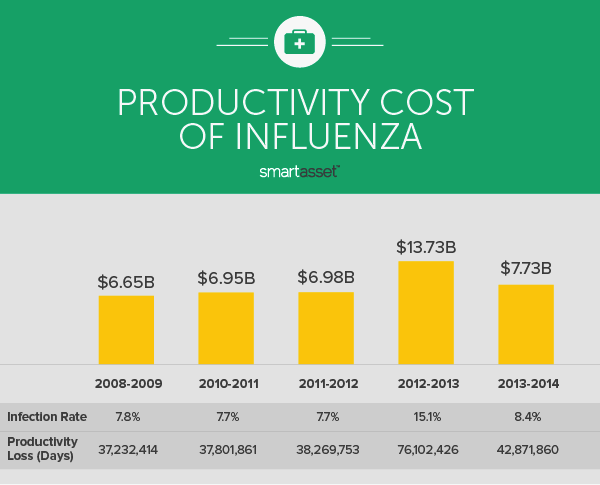 To find the productivity costs of influenza, SmartAsset first looked at state-by-state data on influenza infection rates over the past decade. Google provides weekly estimates of influenza activity in the United States, based on the amount of web searches for certain flu-related terms (for example, “headache”). When compared to historical flu data collected by the Center for Disease Control, these estimates have proven to be highly reflective of actual flu activity.1

We combined those weekly infection rates with population data from the US Census Bureau over the past five years to estimate the number of infected individuals by age group each year.2 Then, using data on flu-related health outcomes from researchers at the Center for Disease Control, we calculated expected productivity loss, in days, for each infected person.3 By combining that expected productivity loss with our estimate for the number of infections, we were able to calculate the total days lost due to influenza.4

Finally, we used the average wage in each state over the past five years, adjusting for inflation, to calculate the cost of that productivity loss in current dollars. So, in short, our formula looked like this:

Below are the annual average results for each state. Note that our estimate does not include medical costs, which means that the total cost of influenza is likely much larger than the productivity costs listed below.

Want to move to Utah? Find out how much house you can afford there.

As mentioned above, the South-Central states (Louisiana, Oklahoma, Arkansas and Texas) have been hardest hit by the flu over recent years, with infection rates above 15% and productivity losses to match. For those four states alone, annual productivity losses have topped $1.4 billion. Here are some other regional trends we spotted in our investigation:

While we are still in the middle of flu season, this year is shaping up to be among the worst in recent memory. Flu activity is currently high in most states, and has been since mid-December.  That means millions of people across the country are being forced to stay home sick, and, if past trends hold, productivity costs this year could top $10 billion.

3. See Molinari, et al: The annual impact of seasonal influenza in the US: measuring disease burden and costs. Published in Vaccine 2007. Available online at sciencedirect.com.

4. We did not incorporate the productivity loss due to influenza-related deaths in our calculation, but this is a significant cost. Several thousand people die each year following severe flu infections.