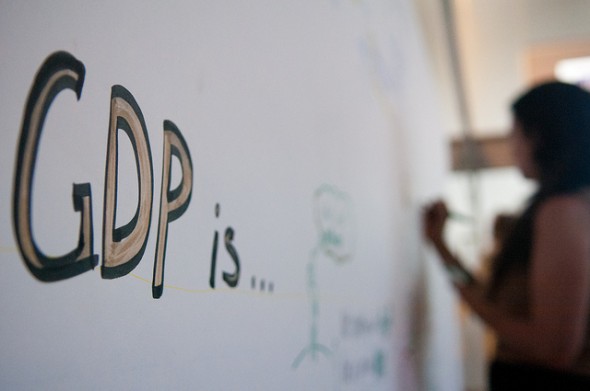 If you watch the news reports on the economy or business and finance, you have likely heard the acronym GDP, but do you know what it means?

GDP stands for gross domestic product. While the term may seem like any other finance term, and go over your head, it is actually pretty important. Knowing the gross domestic product of a nation can inform you on how well that nation’s economy is doing, if it has grown in recent years or if it is currently experiencing a recession. GDP helps to inform domestic and international investing decisions and much more. However, in order to understand how GDP functions you must first understand what it is and how it is derived.

Simply put, GDP is the monetary value of all the goods and service produced within a country’s borders in a certain time period, usually reported on a quarterly (3 months) or annual basis.

While I won’t go into detail about the exact formula for GDP, just know that GDP includes all private consumption, government spending, all business spending, investments and exports less imports in the country’ territory. The total amount of all this spending is what makes up GDP and informs investors, business analysts, economists and everyone else on how the economy is performing.

The idea is that if GDP is rising the country is producing more and the economy is growing. However, it is important to control for inflation, which could mean that although spending is going up the actual products and services produced remain the same or could even be decreasing.

While GDP is one of the most widely used indicators of a country’s overall economic strength, it is not without some debate. There are some economists who contend that GDP does not take into consideration all of a country’s products and services.

While these small instances may seem minor on an individual level, when it comes to total spending, they can add up. GDP also fails to report on a country’s standard of living, education levels of its population and even happiness levels which are also indicators of a nation’s economic strength. Thus, it appears GDP does not give a full picture of a country’s spending and output, though it is the best and most widely used tool at this point.

How Does GDP Affect You?

Of course, looking at a country’s total spending and output, it may seem like the implications are far removed from your own life, but this is not true.

A growing GDP—when inflation is controlled for—indicates a prospering economy. This means companies are growing and likely looking for new employees, banks are more likely to approve of mortgages, business loans, car loans, etc. This can make it easier for you to find employment, get a promotion, start a business, purchase a home and more.

GDP has a major impact on our daily lives whether we realize it or not. So the next time you see a report involving GDP, hopefully you will understand a little more about what the numbers are referring to.