Gratuity Not Included… Until Now 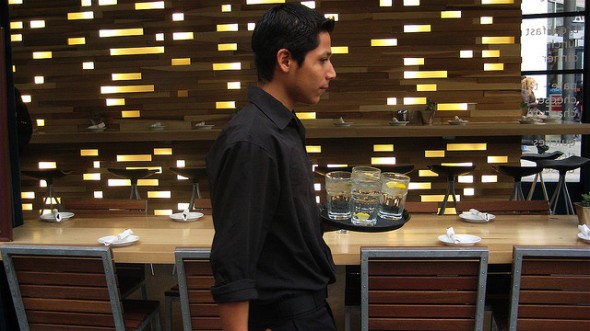 If you’ve ever been out to eat with a group of people, you’re probably aware that many restaurants have an automatic gratuity policy when it comes to large parties. Now the IRS is planning to change the way that automatic tips are handled and it could have negative tax implications for restaurant employees… and customers!

Traditionally, any tips a server receives from an automatic gratuity aren’t subject to payroll taxes. Instead, it’s up to each server to report their tips properly on their income taxes and only their hourly wage, which in many restaurants is as little as $2.13, is subject to withholding. Under the new ruling, which takes effect in January, automatic gratuities will be treated as service charges instead of tips, making them taxable wages.

Specifically, the ruling says that a tip is defined as something given without compulsion and that customers have the right to determine how much gratuity they want to leave. While most restaurants include information about the automatic gratuity on the menu, customers are not always aware that they have the option of leaving a different tip amount.

The ruling has received criticism from the food service industry, largely due to the increased tax liability it poses for servers and the additional reporting burden for restaurant owners. Restaurants, rather than servers, would be responsible for ensuring that the automatic gratuities are properly reported and taxed. Factoring in the amount of the automatic gratuity into each server’s hourly pay could result in higher overhead costs.

Several restaurants are contemplating doing away with the automatic gratuity in favor of a suggested tip system. Darden Restaurants, which owns Red Lobster and Olive Garden, is already testing a suggested tip system in certain locations. The new software provides customers with suggested tip amounts based on the size of the bill. It allows customers to tip more, less or not at all. Texas Roadhouse Inc. has also said that it’s considering phasing out its current automatic gratuity of 15% for parties of eight or more.

For servers, the new rule could mean they’ll end up paying more in taxes if they work in restaurants that have an automatic gratuity. They could also face declining tips in restaurants that discontinue the policy, since it will be up to the customer to determine an appropriate gratuity. The ruling also impacts other wait staff, like hostesses and bus boys, who receive a share of each server’s tips.

Originally, the ruling was set to take effect in 2012 but the IRS delayed its implementation at the restaurant industry’s urging. The tax ruling is just one of several new guidelines that are now scheduled to take effect next year. For example, restaurants that employ 50 or more full-time workers will be required to offer health insurance to anyone working 30 hours a more each week.

So what does the rule change mean for customers? You’ll have more freedom when it comes to deciding how much to tip but it could come at a cost. Restaurants that continue to use the automatic gratuity system will have to find some way to pay for the extra accounting work that will be necessary. The next time you head out for a steak dinner, you could be paying more for what’s on your plate.