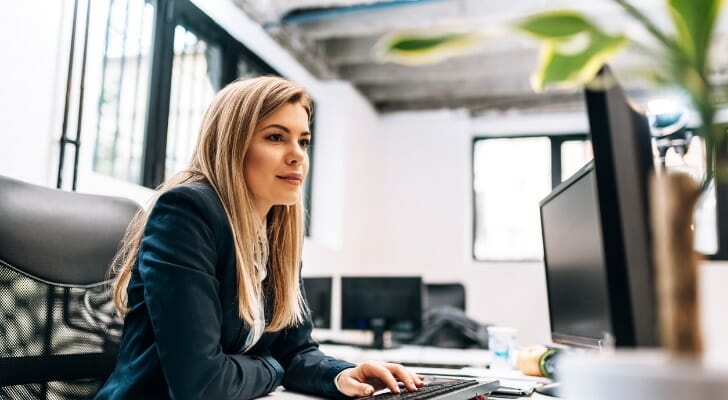 Though older workers dominate the financial advisor occupation, it is potentially enticing to young professionals as a growing and high-paying job. The Bureau of Labor Statistics (BLS) projects employment of personal financial advisors to grow 4% from 2019 to 2029, about as fast as the average for all occupations. Additionally, the average annual earnings for advisors in 2019 was almost $119,300, more than two times the average annual earnings for all U.S. workers. What’s more, advisors may tailor their own practice to their strengths or interests and have a flexible work schedule. 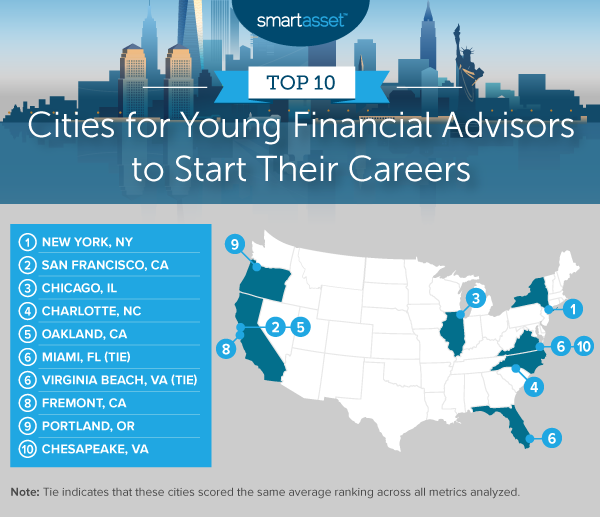 Young financial advisors may find Chicago, Illinois to be an appealing place to start their careers given high average earnings and low rent. The typical financial advisor in Chicago earns almost $150,000 per year, the 10th-highest rate in our study. Additionally, the median monthly rent in Chicago is $1,100, meaning that financial advisors on average spend less than 9% of their salary on rent.

If you live in the Windy City and are looking for financial help, take a look at our list of the best financial advisors in Chicago.

Oakland is the second of three California cities that make it into our top 10. It ranks in the top 10% of cities for two metrics: average financial advisor earnings and percentage of high-earning households. Financial advisors in Oakland make about $157,700 on average. Additionally, more than 15% of households earn $200,000 or more annually.

Demand for financial advisor services in Miami, Florida appears high. Close to 27% of residents in Miami are between the ages of 45 and 64, the second-highest rate in our top 10 and sixth-highest overall. Moreover, SmartAsset data shows that residents are looking for financial advisors 2.15 times more than they are on average across the 100 cities in our study.

Virginia Beach, Virginia ties with Miami, Florida as the sixth-best city for young financial advisors to start their careers. Virginia Beach has the seventh-highest average earnings for financial advisors, at almost $154,500. It additionally ranks in the top fourth of cities for the percentage of the population nearing retirement. The Census Bureau estimates that 24.7% of the population is between 45 and 64 years old.

Fremont, California is the smallest city that makes it into our top 10. In 2018, the city’s population was about 237,800, and though that’s smaller than other top-ranking locales, many households in Fremont fall into the primary categories of those driving financial advisor demand. Specifically, Fremont has the highest percentage of high-earning households and the fourth-highest percentage of the population nearing retirement, reflecting a potentially ready crop of clients in need of financial services. All told, 31.1% of households earned $200,000 or more in 2018, and 27.4% of residents were between the ages of 45 and 64.

Portland ranks in the bottom half of the study on the final metric, rent as a percentage of average financial advisor earnings. Though rent in Portland is low relative to rates in other West Coast cities, it still clocks in above the national average. Census Bureau data from 2018 shows that the median monthly rent in Portland is almost $1,300. As a result, rent makes up more than 13% of average financial advisor earnings. 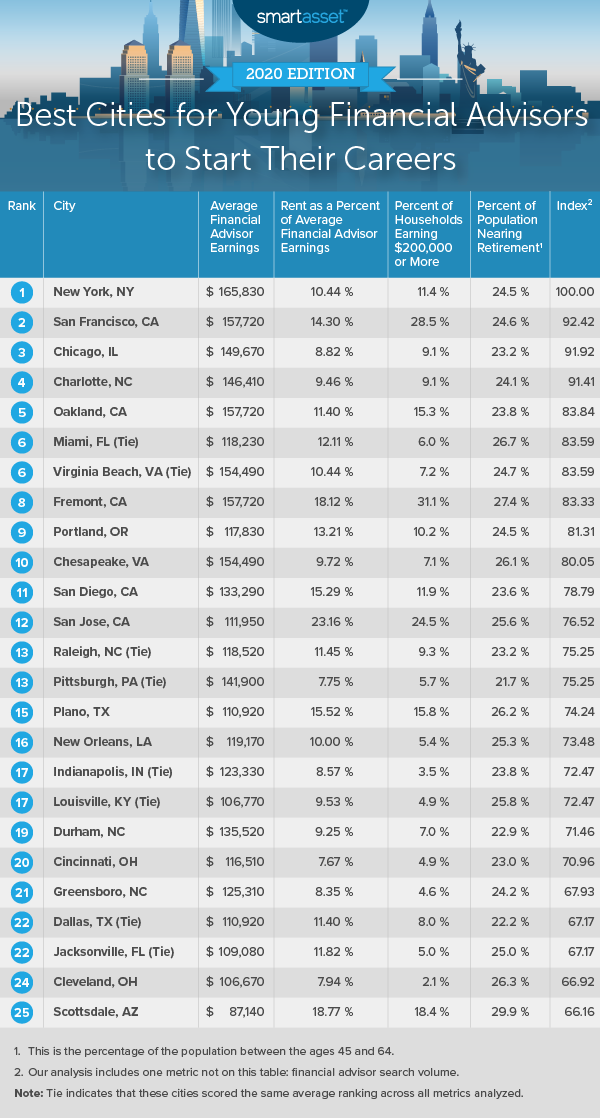 To find the best cities for young financial advisors to start their careers, SmartAsset looked at data for 100 of the largest cities in the U.S. We compared these cities across five metrics:

New business growth can prove challenging for financial advisors. But during these uncertain times, more people are looking for money management advice than ever before. SmartAsset’s financial advisor matching tool, SmartAdvisor, pairs financial advisors with prospects near them based on multiple matching criteria, including investable assets. Click here to learn more about matching with qualified, local leads.

Stephanie Horan, CEPF® Stephanie Horan is a data journalist at SmartAsset. A Certified Educator of Personal Finance (CEPF®), she sources and analyzes data to write studies relating to a variety of topics including mortgage, retirement and budgeting. Before coming to SmartAsset, she worked as an analyst at an asset management firm. Stephanie graduated from Williams College with a degree in Mathematics. Originally from Philadelphia, she has always been a Yankees fan and currently lives in New York.