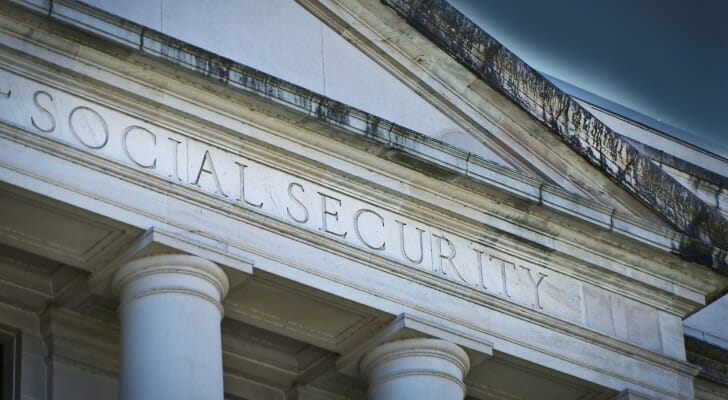 Your health status, anticipated longevity and retirement cash needs all factor into when it makes sense to claim Social Security. Of course, you’re eligible to start taking Social Security at 62. But the longer you wait, the higher your monthly benefit will be, and conventional wisdom says that you should hold out as long as you can to ensure more robust checks. Your patience, in other words, is rewarded in the long run. But pop open the hood to get a more granular look at the numbers, and the virtues of delaying diminish.

To investigate, we used SmartAsset’s Social Security calculator to examine how total earnings add up when claiming at ages 62, 67 and 70. For the purposes of this hypothetical, we’re considering a person born in 1960 – who will reach his or her first year of eligibility next year, and whose full retirement age is 67 – making $60,000 a year.

As you make the decision of when it’s best for you to claim Social Security, be sure to consult with a trusted financial advisor to determine what best suits your situation. 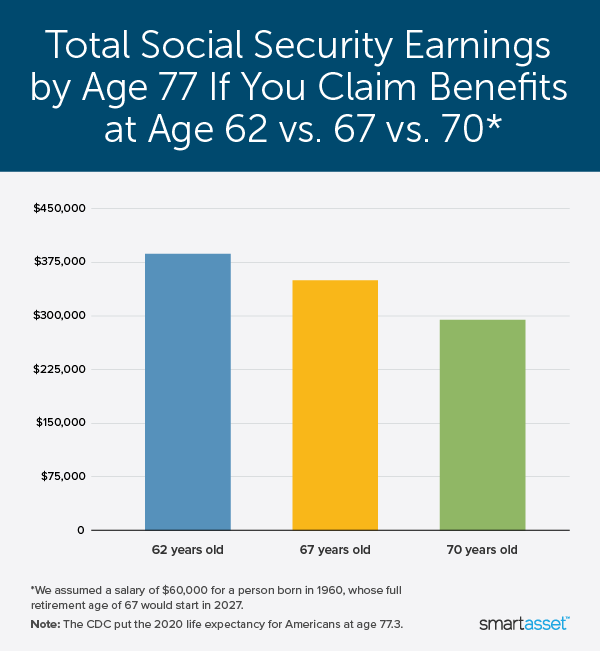 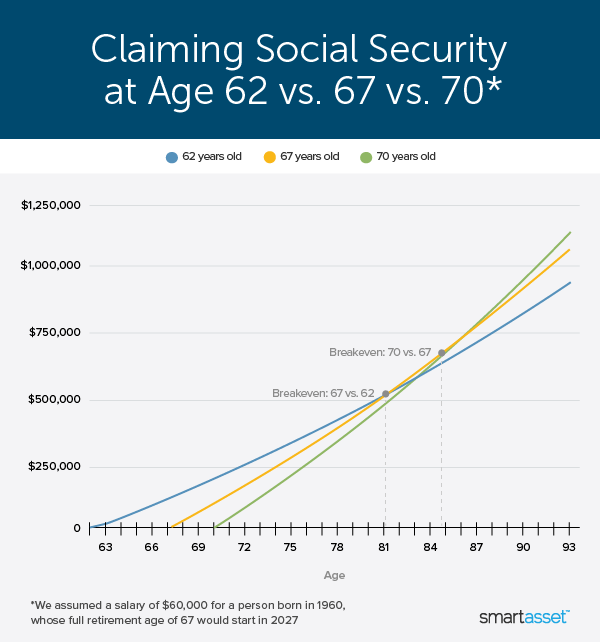 Of course, there are benefits to delaying retirement: Another year working means one more year building up your nest egg and one fewer year drawing it down. And waiting until full retirement age also means that any income you earn in retirement won’t reduce your Social Security benefits. And over time through your late 80s and into your 90s, the advantages of waiting to claim Social Security become more pronounced — by 2048 (age 88), there’s nearly a $100,000 difference between claiming at 62 and claiming at 70. And by 93, waiting until 70 would net you $67,394 more than claiming at 67 — and nearly $200,000 more than claiming at 62. That’s a huge chunk of change to use during your later years or pass on to your heirs. But if you’re waiting to claim in hopes of getting the most money from the government, you’re making a bet on your longevity that may not pay off.

Though retirement gurus typically extol the virtues of waiting to take Social Security, there are definite bird-in-hand advantages to claiming your Social Security benefits as early as possible when you consider life expectancy. That’s to say nothing, of course, of the potential to invest money from those early Social Security checks and leave more money in your other retirement accounts to grow.

Ross Urken Ross Kenneth Urken is an editor and writer who has published in Bloomberg Businessweek, The Wall Street Journal, The Washington Post, Forbes and The New York Times, among other publications. Prior to bringing his expertise to SmartAsset, he was the personal finance editor of TheStreet.com. Ross is a member of the Society for Advancing Business Editing and Writing and a Certified Educator in Personal Finance (CEPF®). He graduated from Princeton University.
Share Tweet
Related Posts
Read next article