Where High Gas Prices Will Most Affect Residents – 2022 Study 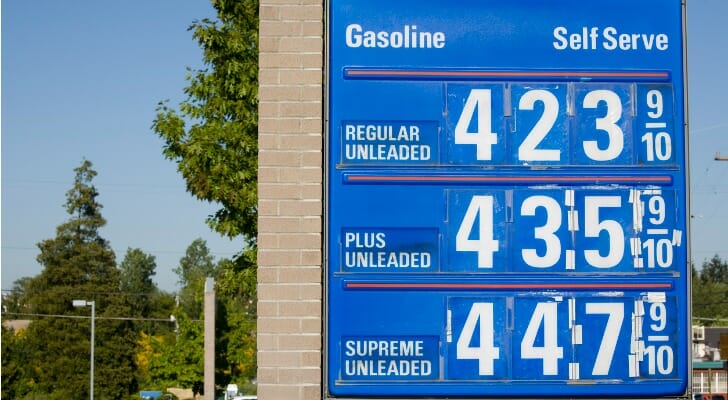 As inflation continues to send the cost of goods and services higher and higher, there’s one place where price spikes have been especially acute: the gas pump. The consumer price index says that the price of gasoline surged 6.6% in February 2022, pushing costs 38.0% higher than one year earlier. And if rising inflation wasn’t enough of a concern, the Russian invasion of Ukraine has added more uncertainty and volatility to energy markets. By March 11, the national average for unleaded gasoline peaked at $4.33 per gallon, according to AAA data.

With gas prices on the rise, SmartAsset set out to determine where surging prices will affect people the most. To do this, we examined data for all 50 states and the District of Columbia across six metrics: estimated gas spending as a percentage of income, one-month change in average gas prices, one-year change in average gas prices, percentage of households with at least one car, percentage of households with two or more cars and average annual vehicle miles traveled per capita. For more information on our data sources and how we created the final rankings, read our Data and Methodology section below.

We estimate that average gas spending for one car in Alabama makes 4.25% of the median household income, the sixth-highest percentage across our study. Between Feb. 18 and Mar. 18, average gas prices in the state rose $0.79 per gallon, which represents the 12th-largest increase in the country. Over the last year, gas prices in Alabama have gone up $1.40 per gallon, more than 30 other states and the District of Columbia. Meanwhile, the most recently available data from the Federal Highway Administration (FHWA) shows that Alabama has the second-highest average vehicle miles traveled per capita.

In neighboring Mississippi, drivers spend a higher percentage of their income on gas (4.71%) than anywhere else in the country. The state also has the third-highest average annual vehicle miles traveled per capita (13,370) and the 17th-largest one-month increase in average gas prices ($0.75).

Drivers in Tennessee currently spend 4.01% of their income at the pump, the 10th-most across our study. On average, individuals in the Volunteer State travel more vehicle miles than 40 other states plus the District of Columbia. Tennessee, which also has the 13th-highest percentage of households with at least one car (63.44%), saw average gas prices rise $0.77 per gallon between Feb. 18 and Mar. 18. That’s the 15th-largest one-month increase in our study.

In New Mexico, gas expenditures account for 4.48% of drivers’ incomes, the third-most across the country. The state also has the seventh-highest vehicle miles traveled per capita, according to the most recently available FHWA data. And more than 94% of households in New Mexico have at least one vehicle, which is the 16th-highest rate for that metric.

Only Utah has a higher percentage of households with vehicles than Idaho. In fact, about 96% of households in the Gem State have at least one vehicle, while nearly 72% of households have two or more. Idaho also had the seventh-largest increase in gas prices between Feb. 18 and Mar. 18 ($0.83) and drivers in Idaho spend 3.90% of their income on gas, 16th most across our study.

Indiana has the sixth-highest average annual vehicle miles traveled per capita in the country. The state saw the average price for a gallon of gas go up $0.83 between Feb. 18 and Mar. 18, which is the nation’s eighth-largest increase in that timespan. Meanwhile, the average price of gas was $1.47 cheaper a year ago, having risen more than in 37 other states, plus the District of Columbia, since then.

Drivers in Louisiana currently spend the fourth-highest percentage of their income on gas (4.43%). The state also had the 14th-largest one-month increase in the average price of gas ($0.78). Over the last year, gas prices have risen $1.45 per gallon, which is also the 14th-largest increase during that time.

Average gas prices in Arizona rose $0.89 between Feb. 18 and Mar. 18, which is more than 46 other states and the District of Columbia. A gallon of regular gas now costs drivers an average of about $4.61, or $1.50 more than a year ago. That’s the seventh-largest one-year increase in the nation. Meanwhile, drivers in Arizona spend the 11th-highest percentage of income on gas (4.00%) in our study.

Nowhere in the U.S. have gas prices increased more than Nevada since February. The average price of a gallon of gas shot up $1.10 between Feb. 18 and Mar. 18. Nevada drivers have also seen a gallon of gas become $1.78 more expensive in the last year, second only to California, where average gas prices have risen $1.93. That means drivers are spending more of their income at the pump (4.39%), the fifth-most in the country.

To rank where higher gas prices will most affect individuals, we looked at data for all 50 states and the District of Columbia and compared them across six metrics:

We ranked each state in every metric, giving a double weight to estimated gas spending as a percentage of income and a single weight to average annual vehicle miles traveled per capita. The remaining metrics were assigned a half weight.

Tips for Saving Money on Gas