Where Do Americans Give the Most to Charity? – 2021 Edition 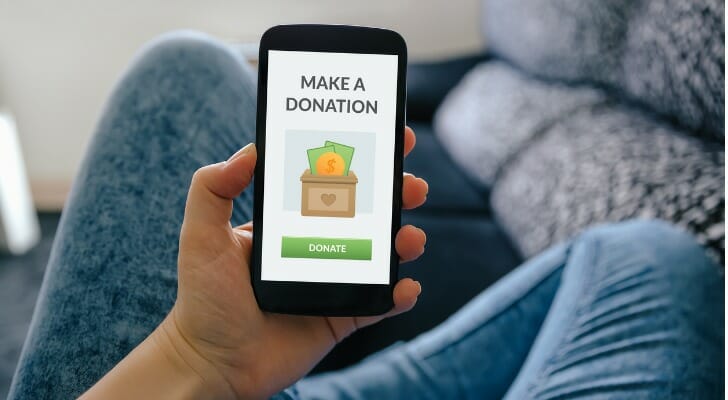 Charitable giving increased by 5.1% in 2020, as Americans donated $471.44 billion during a year defined by COVID-19. Of those donations, 28% went to religious organizations, 15% to education and 14% to human services, according to the National Philanthropic Trust. Giving to charity not only allows a person to support the causes they value, it can also serve as a shrewd financial move. Qualifying charitable contributions are tax-deductible and lower one’s tax bill.

To determine the states and places where Americans give the most to charity, we compared all 50 states plus Washington D.C., as well as 51 of the largest metro areas across the following metrics: charitable contributions as a percentage of income, percentage of tax returns with charitable donations, average charitable contribution, volunteer rate and average hours spent per volunteer. For details on our data sources and how we put all the information together to create our final rankings, read the Data and Methodology section below.

States Where Americans Give the Most to Charity

Beyond Utah, the 10 states that give the most to charity include two significant groupings of states, one on the East Coast and another on the West Coast. The area surrounding the nation’s capital is well-represented, with Maryland (No. 2), Washington D.C. (No. 3) and Virginia (No. 9) all in the top 10.

Meanwhile, the Pacific Northwest is also a particularly charitable region, according to our metrics. Idaho (No. 4), Oregon (No. 7) and Washington (No. 10) are all among states that give the most to charity. The remainder of the top 10 comprises Arkansas, Oklahoma and Georgia, the fifth-, sixth- and eighth-most charitable states. 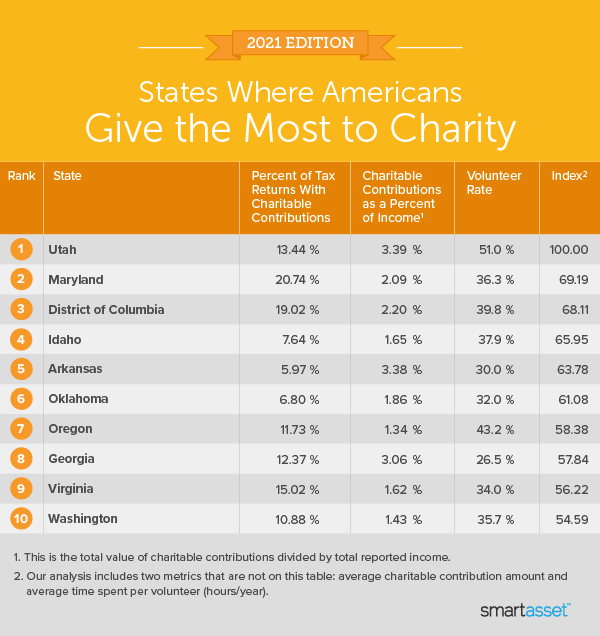 Places Where Americans Give the Most to Charity

Salt Lake City residents donate 2.91% of their salaries to charity, the second-highest percentage in this study. The average person in Salt Lake City who gives to charity donates $17,053 per year, the sixth-largest contribution of all 51 metro areas we studied. The Salt Lake City metro also ranks third for volunteer rate (45%) and seventh for average number of hours people spend volunteering, nearly 108 per year.

Residents of the San Jose-Sunnyvale-Santa Clara metro area in California donate 3.48% of their annual income to charity, the highest percentage in our study. Those who make charitable contributions donate an average of $30,910 each year, which also ranks No. 1 among all 51 metro areas. Meanwhile, 19.21% of tax returns in San Jose-Sunnyvale-Santa Clara listed charitable donations in 2018, the fourth-most across our study.

Residents of the Memphis metro area who make charitable contributions give away the fourth-highest percentage of income across our study (2.33%). On average, residents who donate to charity make $16,036 worth of contributions each year, the ninth-most of all 51 metro areas that we examined.

In the Dallas-Fort Worth-Arlington metro area, residents who give to charity donate the eighth-most out of all 51 metro areas ($16,115). Meanwhile, charitable contributions comprise 1.91% of the income for people who donate, the 10th-most across our study. Dallas-Fort Worth-Arlington residents also volunteer an average of just over 107 hours per year, the eighth-most of all metro areas we studied.

In 2018, 13.63% of tax returns filed in the Boston-Cambridge-Newton metro area of Massachusetts and New Hampshire showed charitable contributions, the 11th-most across our study. Residents of the greater Boston area who give to charity donate 1.87% of their income, the 12th-most among all 51 metro areas for which we compared data. The average person who gives to charity makes $15,591 worth of contributions per year, the 13th-most.

The Washington D.C. metro area, which includes swathes of three states, ranks No. 1 for percent of tax returns with charitable donations (22.91%). Just over 38% of residents volunteer, giving this metro area the seventh-highest volunteer rate across our study. Meanwhile, residents who give to charity donate 2% of their income each year, the eighth-highest among all 51 metro areas in our study.

Residents of the Birmingham-Hoover metro area donate 2.7% of their income to charity, the third-highest contribution percentage across our study. The average person who donates to charity gives $17,883 per year, the fifth-most among all 51 metro areas for which we compared data.

To find the most charitable places in the U.S., SmartAsset separately compared 51 of the largest metro areas by population and all 50 states (plus Washington D.C.) across the following metrics: