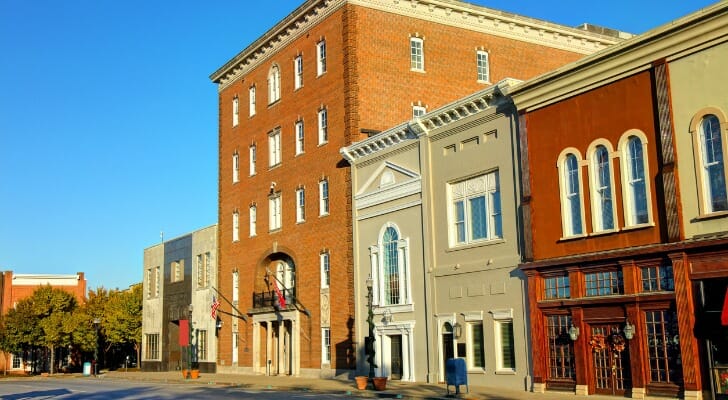 The U.S. recently hit a large milestone on the road to recovery from the economic fallout of COVID-19. In the second quarter of 2021, real gross domestic product (GDP) exceeded its pre-pandemic level, according to Bureau of Economic Analysis data. This rebound comes exactly a year after real GDP hit its lowest point during the COVID-19 crisis when it was down by more than 12%. National signs of growth are apparent at local levels. While some cities are still struggling with high unemployment rates and depressed economic growth, many are growing again.

In this study, SmartAsset uncovered the fastest-growing cities in the U.S. To identify the top boomtowns in America in 2021, we looked at the most recently available data for 500 of the largest cities across the following seven metrics: population change, unemployment rate, change in unemployment rate, GDP growth rate, business growth, housing growth and change in household income. For more information on our data or how we put together our findings, read the Data and Methodology section below. 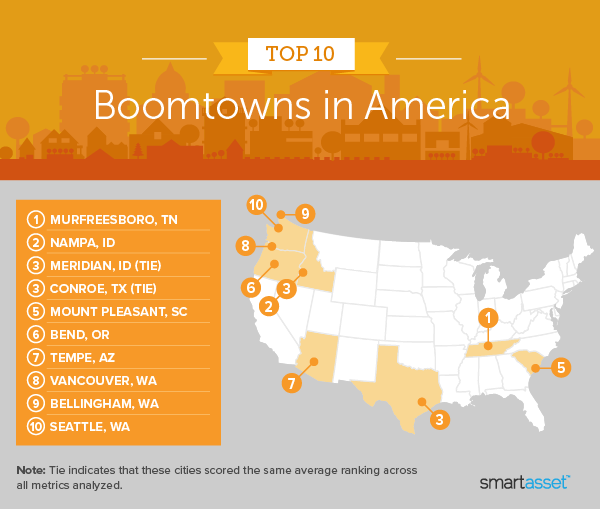 Murfreesboro, Tennessee – our top-ranking boomtown – places in the top 20% of cities for six of the seven metrics we considered. It ranks eighth in its five-year population change (19.62%) and 18th in its five-year change in number of housing units (21.15%). Murfreesboro also has the 52nd-lowest August 2021 unemployment rate (3.4%), the 97th-highest average yearly GDP growth rate (3.71%), the 35th-highest five-year establishment growth (15.95%) and 66th-highest five-year change in household income (38.25%).

Businesses in Nampa, Idaho are booming. Census Bureau data shows that between 2014 and 2019 the total number of establishments in Nampa grew by close to 29%, the highest rate in our top 10 boomtowns and second-highest overall. Nampa also ranks in the top 5% of cities for two additional metrics: five-year population change and average yearly GDP growth. From 2015 to 2020, the population grew by 15.20% and the average yearly growth in total output for the three-year period from 2016 to 2019 is 6.27%.

Just about 10 miles east of Nampa, Meridian, Idaho ties with Conroe, Texas as the No. 3 boomtown in America. From 2015 to 2020, the population of Meridian, Idaho grew by more than 31% – a top-three rate in our study. Meridian also ranks ninth for both its August 2021 unemployment rate (2.5%) and five-year change in number of housing units (27.52%).

Across the top 10 cities in our study, household incomes are growing the fastest in Mount Pleasant, South Carolina. From 2014 to 2019, the median household income grew by more than 47% – a rate that is roughly 25 percentage points higher than the national average and 16th-best across all 500 cities we considered. The total population of Mount Pleasant also grew by 13.53% from 2015 to 2020, the 19th-most in our study.

East of Phoenix, Arizona’s Tempe ranks as the No. 7 city in our study. Across the seven metrics we considered, it ranks in the top fifth of cities for five. It has the 28th-highest five-year population change (11.88%), the 86th-highest average yearly GDP growth (3.77%) and 81st-greatest five-year change in number of establishments (11.96%). Additionally, from 2014 to 2019, the number of housing units grew by 17.34%, the 29th-best overall. During the same period, the median household income increased by 40.70%, the 50th-best in our study.

Vancouver, Washington is about 10 miles north of Portland, Oregon (which ranks 44th in our study). This smaller nearby city ranks well for its growing number of businesses and housing options. Census Bureau data shows that from 2014 to 2019 the total number of establishments and housing units grew by 16.36% and 11.80%, respectively. Additionally, GDP in Clark County has grown at an annual rate of 6.06%, more than two percentage points higher than the average yearly GDP growth rate of Multnomah County, which Portland is primarily part of.

Bellingham is the second of three Washington cities that make our top 10. Bellingham ranks particularly well for two metrics: five-year population change and average yearly GDP growth. From 2015 to 2020, Bellingham’s population increased by 9.95%, the 46th-most in our study. Moreover, from 2016 to 2019, the average yearly growth in total output grew by more than 8% – a top-10 rate.

Washington’s Seattle rounds out our list of the top 10 boomtowns in America. Seattle ranks in the top 10% of cities for four metrics. It has the 29th-highest five-year population change (11.84%) and eighth-highest average yearly GDP growth rate (about 7%). Additionally, from 2014 to 2019, the number of housing units grew by 14.64% and the median household income increased by 44.40%.

To find the top boomtowns in the U.S. we analyzed data for 500 of the largest cities. We looked at the most recent data available for each of the seven metrics listed below:

Correction: An earlier version of this article did not accurately reflect two ties in the top 50 boomtowns: Denver, Colorado and Johns Creek, Georgia are tied in the 23rd spot and Spokane Valley, Washington and Orem, Utah are tied in the 31st spot.