In April 2020, the U.S. unemployment rate increased by 10.3 percentage points to 14.7%, the highest rate and largest month-to-month increase in the history of this data since the Bureau of Labor Statistics first recorded it in January 1948. A year later, in April 2021, 3.8 million workers quit their jobs, a record-high for a single month. Data shows a resurgence in the number of workers who are resigning for better jobs or exploring other opportunities – which could be the result of seeking better pay and benefits, improved working conditions, the ability to continue working from home and personal fulfillment. During the first five months of 2021, a total of almost 17 million private sector workers (or an average of 3.4 million workers per month) decided to quit. By comparison, an average of roughly 2.5 million workers quit per month between January 2001 and December 2020.

In this study, SmartAsset took a closer look at the high quit levels and rates in the U.S. The “quit level” is the total number of quits, while the “quit rate” is the number of workers quitting their jobs during an entire month as a percentage of total employment. We examined how these metrics have changed over time and identified the industries with the highest quit levels and rates from May 2021, the most recent data available. For more details on our data sources and how we put all the information together to create our findings, read the Data and Methodology section at the end of this report.

On a monthly basis, the BLS reports total job separations, which fall into three categories:

Since the separation rate includes all three of these kinds of terminations, it tends to be more variable than the quit rate. Over the past 20 years, the national jobs separation rate has ranged from 3.3% in October 2010 to 12.3% in March 2020. By contrast, there has been a less than two percentage point range between the lowest and highest national quit rates. The quit rate was lowest following the 2008 stock market crash, with only 1.3% of workers voluntarily leaving their jobs in August 2009. More recently, it hit its highest rate of 3.1% in April 2021. 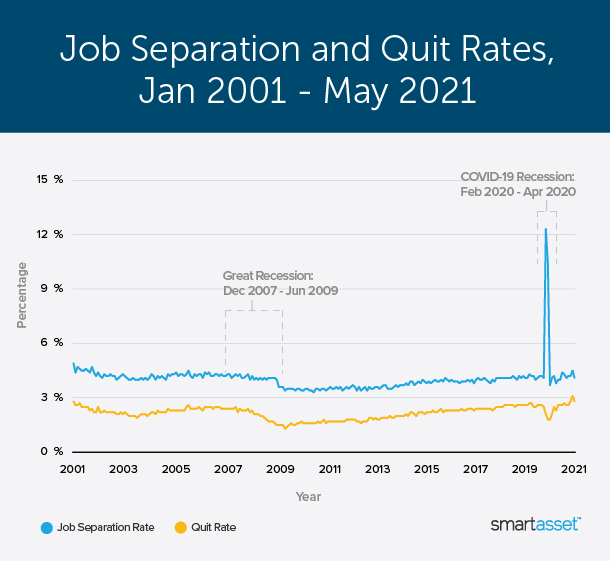 The quit rate is generally low during periods of economic stress. For a five-year period from October 2008 through October 2013 – which included the lowest point of the Great Recession – the quit rate was less than 2%. Similarly, at the onset of the COVID-19 crisis in the U.S., the quit rate was 2.1% in March 2020 and dropped to 1.8% the following month. 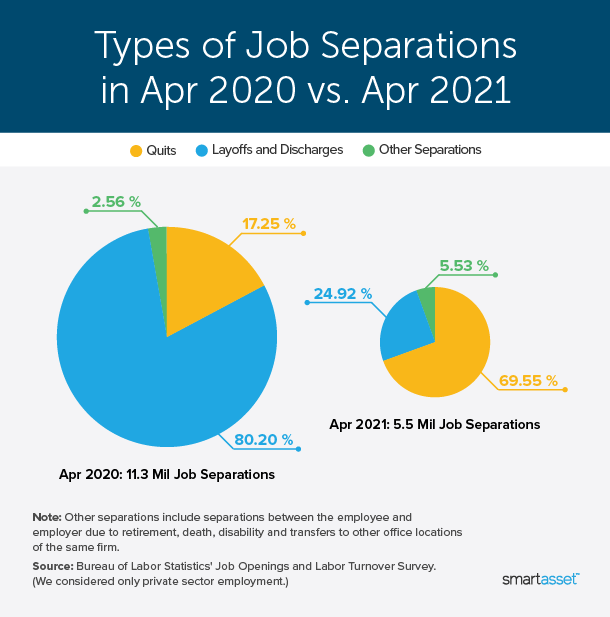 Which Jobs Are Workers Quitting the Most?

The quit rate is second-highest among retail trade and third-highest among arts, entertainment & recreation workers. About 606,000 retail trade workers and 58,000 arts, entertainment & recreation workers voluntarily left their jobs in May. Relative to industry employment, these quit levels represent rates of 4.0% and 2.9, respectively.

Quit rates are not high across the board. Seven industries had quit rates below 2% in May 2021. They include: 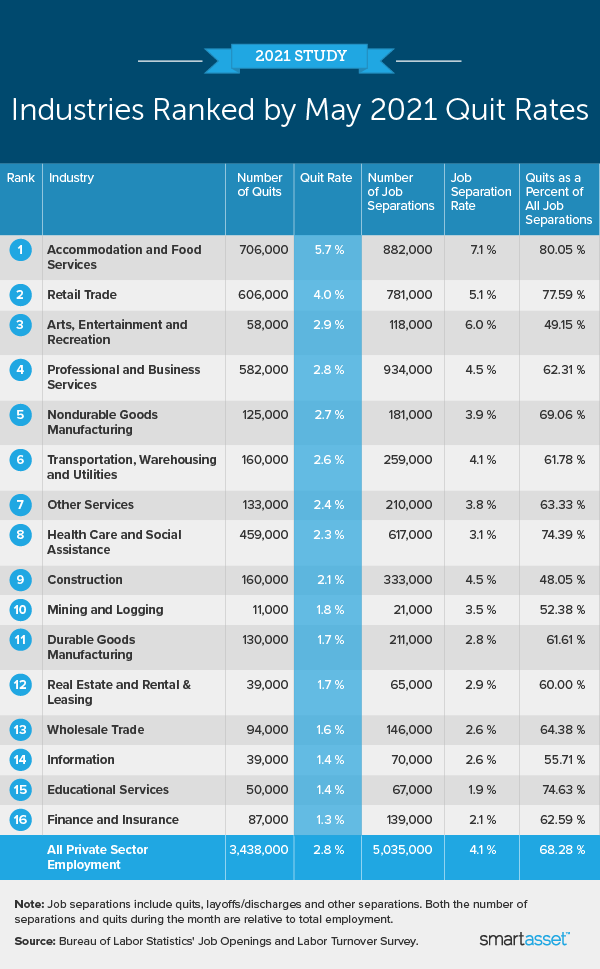 Data for this report comes from the Bureau of Labor Statistics’ Job Openings and Labor Turnover Survey. The report is published monthly and includes information on job separations, including quits, layoffs & discharges and other separations. We considered only private sector employment for all sections of this report.

Tips for Maximizing Your Savings for a Career Shift