Most Bike-Friendly Cities in America – 2021 Edition 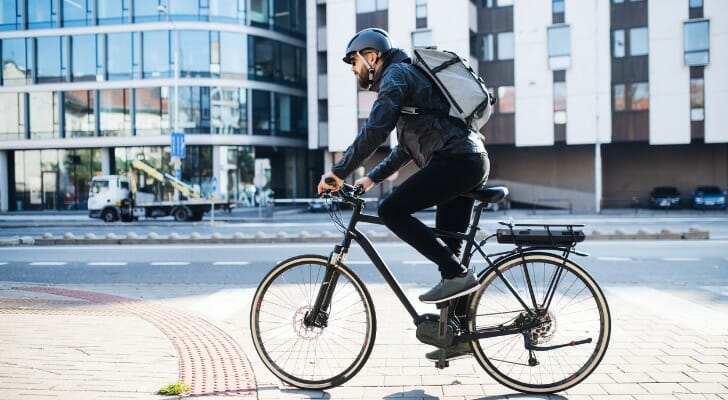 Biking is an eco-friendly, cheap, fun and healthy way to commute in the city. But not all cities are equally accessible for riders – some cities have designated bike lanes, while others simply lack the infrastructure. Nor are all cities the most affordable for the more savings-savvy cyclist.  Keeping this in mind, SmartAsset identified and ranked the most bike-friendly cities in America for 2021.

We compared the 100 largest U.S. cities across seven metrics, including bike score, percentage of bicyclist commuters, bicyclist fatalities, miles of protected bike lanes, income after housing costs, average number of days with precipitation and average number of days with extreme temperatures. For details on our data sources and how we put all the information together to create our final rankings, check out the Data and Methodology section below. 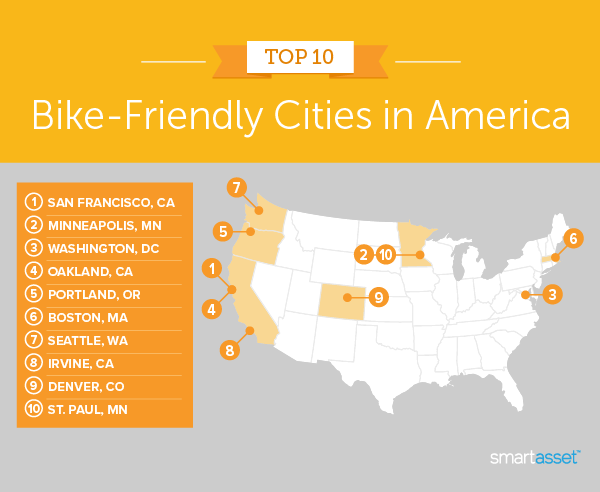 Temperatures in San Francisco, California almost never dip below 30 degrees or rise above 80 degrees, making the city an ideal climate for frequent cycling. The median household income in the city is the second-highest in the study overall ($98,023). Roughly 3.8% of commuters bike to work, the fifth-highest in the study.

Minneapolis, Minnesota has a bike score of 83.5, the highest in our study. This city ranks third for the percentage of commuters that bike to work (3.9%) and second in miles of protected bike lanes (41.7).

Washington, D.C. has the second-highest percentage of commuters biking to work (4.0%) and ranks ninth-highest in miles of protected bike lanes (11.93). The city, however, falls towards the middle of the study with an average of 1.13 bicyclist fatalities for every 100,000 residents from 2014 through 2018.

Oakland, California is tied with its neighbor across the Bay, San Francisco, for the lowest number of days with extreme weather (0.17 per year) and has the seventh-highest percentage of commuters biking to work (3.1%). The city averages 27.85 days of precipitation per year, finishing just inside the top quartile.

Around 5.2% of commuters in Portland, Oregon bike to work, the highest percentage in this study for this metric. Portland also has the second-highest bike score overall (82.4). The weather, however, can be more challenging, with an average of more than 163 days of precipitation each year (the fifth-highest overall).

Boston, Massachusetts averages about 19 days per year with extreme temperatures, ranking 25th for this metric across all 100 cities in our study. Bostonians also have the 10th-highest percentage of commuters biking to work (2.5%) and the sixth-highest bike score (70.5) in the study.

Seattle, Washington averages 165.4 days each year with some precipitation, the third-highest in the study. The city ranks eighth-best, however, for protected bike lanes, with a total of 12.19 miles of them. Many people in Seattle could potentially afford quality rain gear for cycling, though, as the average income after housing is $79,734, the sixth-highest overall.

Irvine, California has the fifth-highest average income after housing costs ($81,826) in our study. The city also has good weather for cyclists, with only 15.9 days with precipitation on average and less than one day per year of extreme weather (ranking seventh- and sixth-best respectively). The city falls to the bottom quartile, however, for bicyclist fatalities, with an average of 2.02 per every 100,000 residents from 2014 through 2018.

Denver, Colorado has a bike score of 72.6, the fourth-highest in the study. The city also places 11th for two different metrics: percentage of bicyclist commuters (2.4%) and miles of protected bike lanes (9.00). Safety is a concern, though, as Denver finishes in the bottom quartile when it comes to bicyclist fatalities, with an average of 2.20 fatalities for every 100,000 residents from 2014 through 2018. 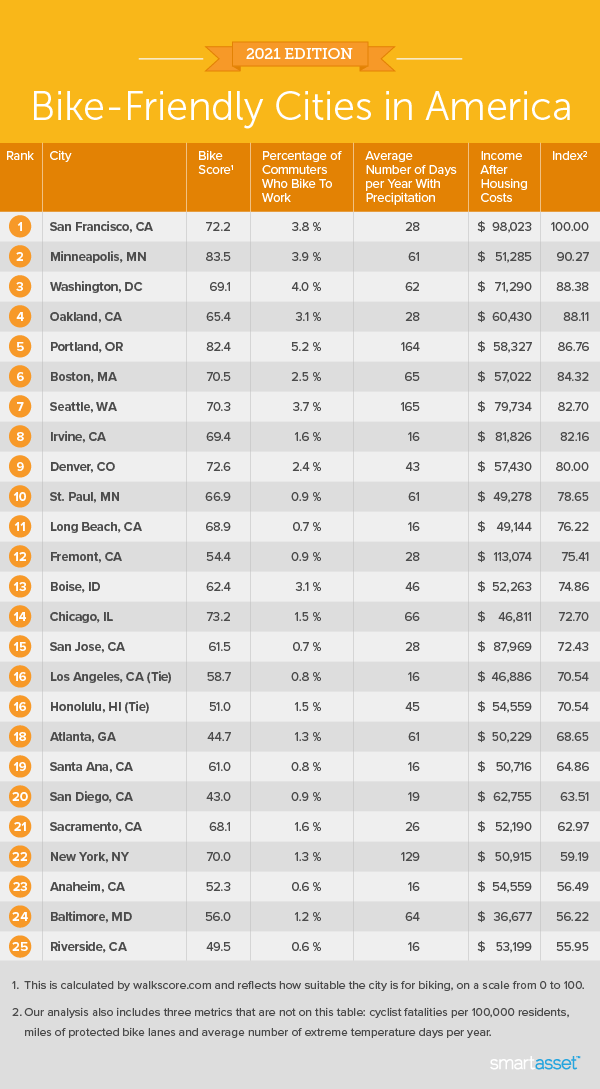 SmartAsset analyzed 100 of the largest U.S. cities across the following seven metrics to find the best biking cities in America:

Tips for Riding into Financial Security