How Much Does the First Year of Homeownership Cost in Large U.S. Cities? – 2021 Study 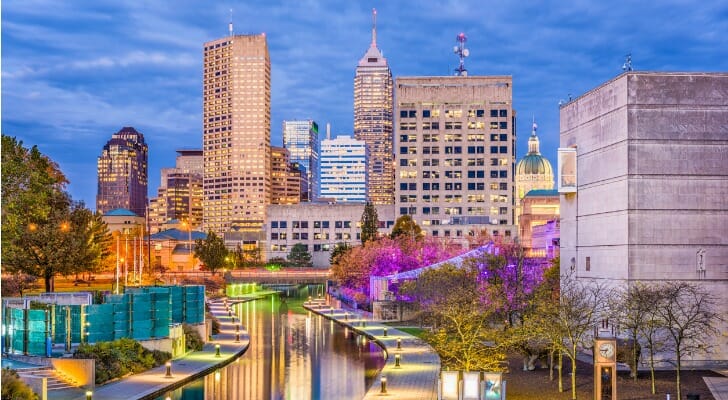 To answer this question, SmartAsset looked at data across 20 of the largest cities in the U.S. We calculated the cost of homeownership in the first year after a home is purchased, using six metrics: median home value, down payment, average closing costs, monthly mortgage payment, property taxes and homeowners insurance. For details on our sources and how we put all the information together to create our final rankings, read the Data and Methodology section below. 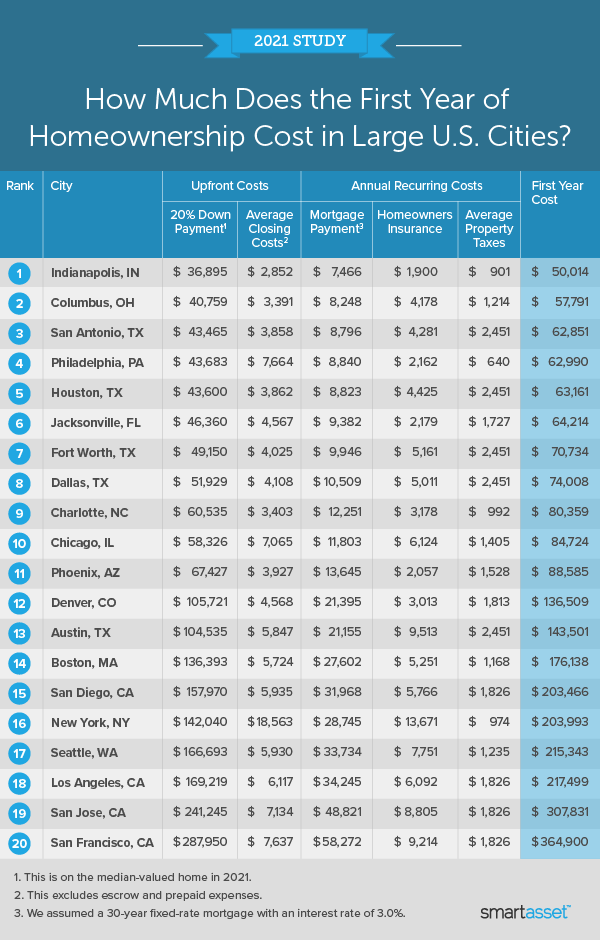 Where First-Year Homeownership Costs Are Most Affordable

The median home value in Indianapolis, Indiana is just $184,474, the lowest of all 20 cities in our study. Average closing costs, excluding escrow and prepaid expenses, are also lower than any other city at just $2,852. The average property tax bill in Indianapolis is just $1,900 per year, about a third of the average for all 20 cities. All of this amounts to the first year of homeownership costing just $50,014.

In Columbus, Ohio, homebuyers will pay a total of $57,791 in their first year of homeownership, making it the No. 2 most affordable big city for the first year of homeownership. The median home price in Ohio’s capital city is just $203,796, while average closing costs are $3,391, both second-lowest across our study. Columbus also has the seventh-lowest average property taxes ($4,178) of the 20 cities that we studied.

At $62,851, San Antonio, Texas is the  No. 3 most affordable large city for the first year of homeownership. Homebuyers in San Antonio pay $47,323 in upfront costs, as well as $15,528 in annual recurring costs. San Antonio benefits from its stock of affordable homes. The median value of a home in the city is just $217,326, third-lowest across our entire study.

No city on the East Coast is more affordable for homebuyers than Philadelphia, Pennsylvania. The first year of homeownership in the City of Brotherly Love requires $62,990, including $51,347 in upfront costs. At $218,417, the median home value in Philadelphia is fifth-lowest across our study. Philly also has the lowest average homeowners insurance ($640, according to Value Penguin data measured at the state level), and the third-lowest average property taxes ($2,162).

The fourth-largest city in the country, Houston, Texas is another affordable place to purchase a home. Homebuyers will spend $63,161 in their first full year of homeownership, including $47,462 in upfront costs and $15,699 in annual recurring costs. Houston has the fourth-lowest median home value ($218,000) and the fifth-lowest average closing costs ($3,862).

It’s no surprise that San Francisco, California is the nation’s least affordable large city for first-year homeownership. Homebuyers in the City by the Bay will need a whopping $364,900 for their first year, thanks in large part to a median home value of $1,439,752. The average property tax bill in San Francisco is $9,214, the third-highest across our study.

This Silicon Valley tech hub is the No. 2 least affordable for first-year homeownership, as homebuyers will pay an average of $307,831 in their first year. San Jose, California, has the second-most expensive homes in our study, as the median home value is $1,206,225. The average property tax bill of $8,805 is the fourth-highest across our study, while average closing costs are $7,134, which also rank fourth-highest.

Though significantly more affordable than its Bay Area counterparts, Los Angeles, California is the No. 3 least affordable city for first-year homeowners. There, homebuyers will pay an average of $217,499 in their first year. The median home value in Los Angeles is $846,096, which ranks third-highest across our study. However, average closing costs are at least $1,000 less than in San Francisco and San Jose.

With an average first-year homeownership cost of $215,343, Seattle, Washington is slightly more affordable than Los Angeles. Homebuyers will need $172,623 in cash to cover upfront costs, which include average closing costs of $5,930, the eighth-highest across our study.

Buying a home in the Big Apple will cost you $203,993 in the first year of homeownership. The median home value in New York is $710,200, which makes homes there more affordable than the West Coast cities on this list. However, closing costs are by far the highest in New York, where a transfer tax pushes average closing costs over $18,000.

To find the most affordable populous cities for the first year of homeownership, SmartAsset examined data for 20 of the largest cities in the country with available data (Washington, D.C. was the only city missing this data). We considered the following metrics, grouped according to upfront costs and annual recurring costs:

First we calculated upfront costs and annual recurring costs in each city. Summing those together, we found the estimated first year cost of owning a home in each city. Cities were then ranked from most to least affordable.