Cities With the Most Million-Dollar Homes – 2021 Study 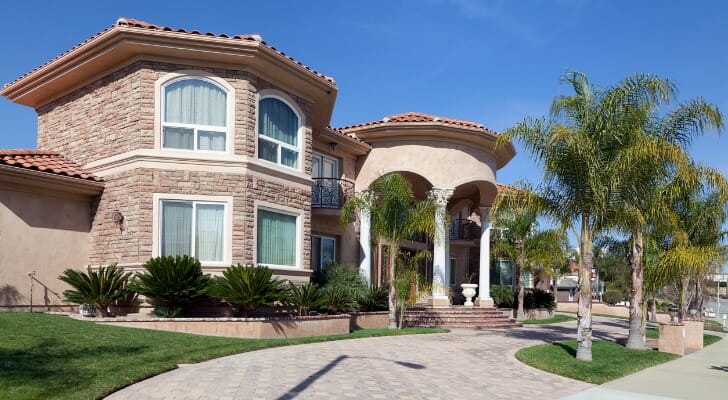 Though they comprise a relatively small fraction of total homes, the number of million-dollar homes in the U.S. is growing. In 2016, about 2.3 million homes were worth $1 million or more. Meanwhile, in 2019, that figure was roughly 3.1 million. However, compared to the total 78.7 million owner-occupied homes, less than 4% of homes are worth $1 million or more. Million-dollar homes are highly concentrated in some states and cities more than others – and for homeowners who may potentially be seeking to upgrade, it could be worth it to seek the services of a financial advisor. In this study, SmartAsset investigated the cities with the most million-dollar homes.

We looked at the 150 largest U.S. cities to analyze the number of owner-occupied million-dollar homes compared to the number of owner-occupied homes. We additionally looked at the cities where the share of million-dollar homes is increasing the most by comparing 2016 and 2019 data. For details on our data sources and how we put the information together to create our findings, check out the Data and Methodology section below.

Cities With the Most Million-Dollar Homes

Across the Bay, Fremont, California follows closely behind San Francisco for its concentration of million-dollar homes and is the only other city where over one in two homes is worth more than that threshold. According to Census Bureau data, about 60% of homes there are worth $1 million or more. The median home value in Fremont is $1,086,700.

While the two largest U.S. cities – New York, New York and Los Angeles, California – rank No. 11 and No. 8, respectively, for their share of million-dollar homes, not all of the most populous cities make the list. The three other largest cities – Chicago, Illinois; Houston, Texas; and Phoenix, Arizona – do not rank in our top 20, shown below. The shares of million-dollar homes in Chicago and Houston are comparable to the national average, while only 2.33% of Phoenix homes are worth at least $1 million. 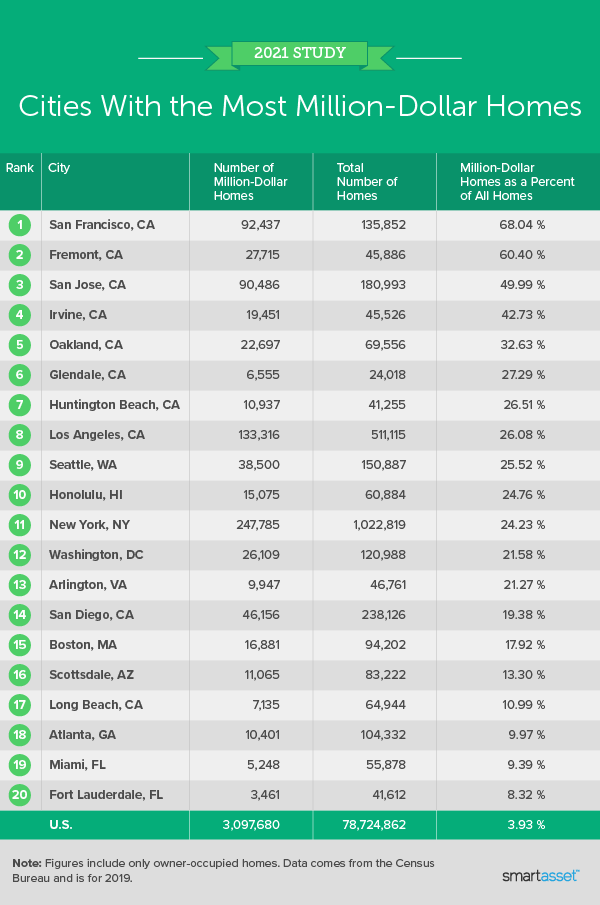 Cities Where the Share of Million-Dollar Homes Is Increasing

From 2016 to 2019, the share of million-dollar homes increased the most in two cities in California’s Bay Area: Fremont and San Jose. In 2016, less than 31% of homes in Fremont were valued at $1 million or more. However, by 2019, million-dollar homes made up more than 60% of homes in the area – roughly a 29 percentage point increase. The increase in San Jose was slightly lower, at about 22 percentage points. 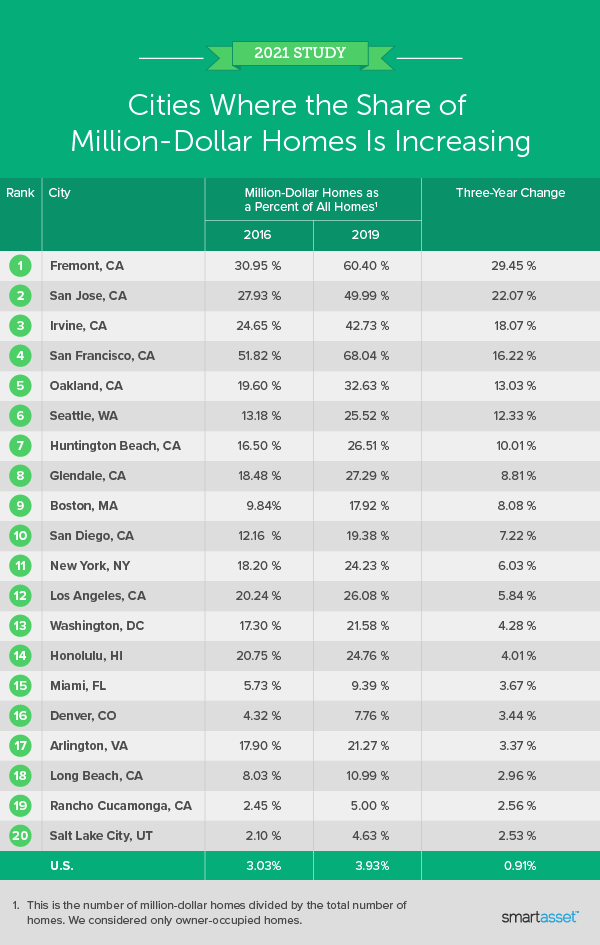 Tips for Understanding How Much to Spend on a Home