The Biggest Changes in American Consumption

In 2005 the American consumer landscape looked pretty different than it does today. Some once-ubiquitous items like Motorola Razr cellphones and Livestrong bracelets have all but disappeared. Changes in taste over time are expected as trends go in and out of fashion, but data from the Bureau of Economic Analysis shows that American consumers in 2015 made some significantly different spending decisions than they did in 2005.

Concerned about your financial future? Check out our retirement calculator.

Some of these changes are due, in part, to changes in technology. Our world is even more connected than before and Americans have adapted. Other changes, like the increase in spending on rent, may be due to the collapse of the housing market and the ensuing recession. We at SmartAsset thought it would be illuminating to take a look at which American consumption habits have changed the most over the past decade. 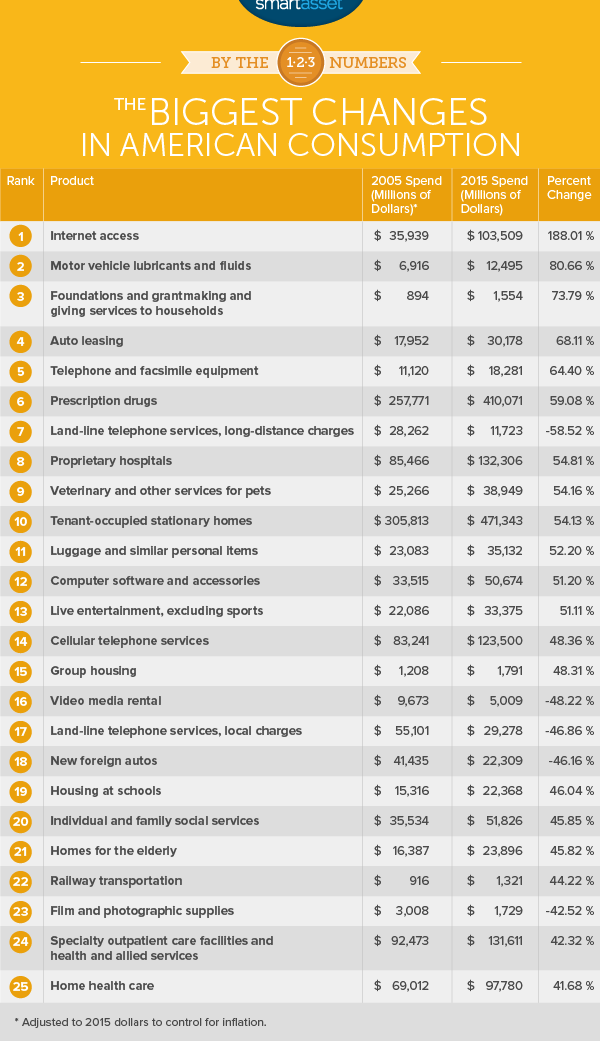 Related Article: How to Get Cheap Car Insurance

3. Foundation and Grantmaking and Giving Services to Households

Here’s a positive. Americans gave 73% more to foundations, grantmaking and giving services to households over the period from 2005 to 2015. In general, spending on social services is up 22% over that period. During the housing crash (2007-2009), expenditure on foundations fell from $1.2 billion to $1.06 billion. Since then, spending in this arena has bounced back to $1.5 billion in 2015.

According to our data, spending on auto leases increased by 68%. Again, combined with the decrease in new motor vehicle spending, this suggests a shift toward thriftiness and concern about long-term prospects.

This category includes phones and other physical telecommunication items, rather than the cost of phone plans and services. Spending on physical phone equipment like iPhones and Androids has risen 68%, from $11.1 billion in 2005 to $18.2 billion in 2015. This category technically also includes items like fax machines, but it’s unlikely those contributed to the large increase in consumption.

Related Article: Top 7 Ways to Save on Prescription Drugs

People simply aren’t spending as much on their landlines. For long-distance calls in particular, services like Skype and WhatsApp obviated the need to make calls through a landline. As a result, spending in long-distance charges have dropped 58%.

9. Veterinary and Other Services for Pets

According to the American Pet Products Association, pet ownership rates are on the rise in the U.S. This could partially explain why spending on veterinary and other services for pets increased by 54%.

It might not be a surprise to learn that housing costs have risen. In 2015 Americans spent $471.3 billion on rent for stationary homes (which is differentiated from mobile homes). That’s 54% more than a decade ago. Of all the categories in the top 25, spending on rent was the highest.

For renters looking to buy: Check out how much house can you afford.

In order to compile our rankings of the biggest changes in American consumption, SmartAsset analyzed data from the Bureau of Economic Analysis. We calculated the percent change in spending from 2005 to 2015 and adjusted 2005 spending for inflation. We then ranked each product according to largest percent change, including both negative and positive change. We used the Bureau of Labor Statistics CPI inflation calculator to measure inflation over the 2005-2015 period.

Questions about our study? Contact us at press@smartasset.com
Photo credit: ©iStock.com/Geber86