The Best Cities to Get Out of Debt 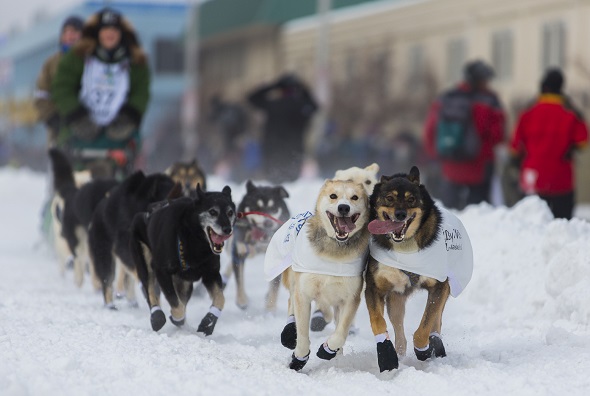 According to Transunion, in the third quarter of 2015 Americans with credit card debt owed an average of $5,232. While thousands of dollars of credit card debt may be manageable for some, for others it likely means minimum monthly payments and accruing interest charges. The problem can start to seem insurmountable.

Read the 2017 version of our study here.

That being said, if you are able to dedicate part of your monthly income to paying down debt, even a relatively small amount can make a big difference in the long run. Just how much you can afford to pay may depend on where you live.

In cities like Oakland or New Orleans, where housing costs have increased while incomes have remained relatively stagnant, someone earning an average income and paying average (or even below-average) rent may not have enough of their paycheck left after taxes and basic expenses to reduce their debt. In areas with a lower cost of living and higher wages, however, the opposite may be true.

To find the best cities to get out of debt, SmartAsset calculated the amount of time it would take to fully pay off credit card debt of $5,232 in every American city with a population over 200,000. We based our calculation on the average income earned by workers with a high school education – jobs that would not require extra education for most Americans.

We then subtracted taxes and typical housing costs to find the disposable income that could be used, in part, to pay off credit card debt  at the current average APR of 13.1%. (Read our full methodology below.)

Try SmartAsset’s credit card calculator to see how long it will take to pay down your balance. 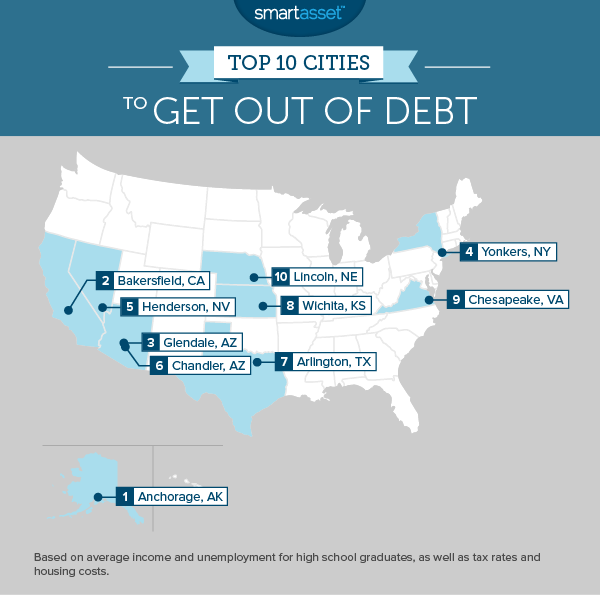 Beginning with the Nome Gold Rush at the end of the 19th century, Alaska has long been seen as a place of financial possibility. That sense of opportunity remains today. Workers with a high school degree and no further education earn a median income of $37,050 in Anchorage, highest of any city with a population over 200,000.

At the same time, with no state or local income taxes to pay, workers in Anchorage get to keep a larger chunk of that income – which means more money that can go toward paying down debt. SmartAsset’s analysis found that it would be possible to pay off the average credit card debt in about six months in Anchorage.

Situated in central California’s Kern County, Bakersfield is far more affordable than many other major California locales, such as San Diego and San Francisco. Lower-quartile rent in Bakersfield is just $654.

At the same time, high school graduates in Bakersfield have a higher average income than those in San Francisco ($34,023 to $24,641). At that rent and that level of income, typical credit card debt could be paid off in just under six and a half months in Bakersfield.

Based on income, taxes and living expenses, it would take 6.6 months (six months and about three weeks) to pay off the average credit card debt of $5,232 in Glendale. The city has very affordable housing, with lower-quartile rent costing just $547 per month. Those low living expenses mean more money can be put toward paying down debt.

The fourth largest city in the state of New York, Yonkers sits just north of New York City. While the overall average income in Yonkers is similar to that of its larger neighbor, workers with a high school degree and no college education earn significantly more in Yonkers. We found that someone living on that $35,027 annual income could put $780 per month toward paying down debt. It would take 7 months to pay off average credit card debt at that rate.

Located just south of Las Vegas, Henderson boasts the seventh-highest average income for workers with a high school degree of any major U.S. city at $32,297 per year. As Nevada has no state income tax, workers also keep more of their income than they would in states like neighboring California. That means more money to pay off debt.

While this central Arizona city is known as a hub for technology companies such as Intel, one does not need a computer programming degree to make a living in Chandler. The median annual income for high school graduates in the city is $32,970. That is fifth highest among cities with a population of 200,000 or more. At that rate, it may be possible to pay off the average credit card debt in a little over seven months in Chandler.

Arlington is located between Dallas and Fort Worth. It is home to the University of Texas at Arlington. Other major employers include the Arlington School District and General Motors, which has an assembly plant in the city. SmartAsset’s analysis found that someone with a high school degree paying lower-quartile rent in Arlington may be able to afford putting $719 per month to paying down debt.

A quarter of the renting population in Wichita pays monthly rent of $416 or lower. Of every U.S. city with a population over 200,000, that is the sixth-lowest amount. Those low living costs make Wichita a great place for paying down debt. It would take a little over seven and a half months for someone to pay down the average national credit card debt based on our analysis.

Chesapeake is the third-largest city in Virginia and is part of the Hampton Roads metro area at the mouth of the Chesapeake Bay. It rates as the ninth best U.S. city to pay off debt because of its relatively high level of income. Residents with a high school degree but no further education in Chesapeake earn a median income of $31,531 per year, according to the U.S. Census Bureau.

The cost of living in Lincoln is among the lowest of all major U.S. cities. A quarter of residents who rent their homes pay less than $475 per month in rent. That can make it much easier to pay down debt than it is in a more expensive city such as Denver. SmartAsset’s analysis found that the average credit card debt could be paid down in under eight months in Lincoln. 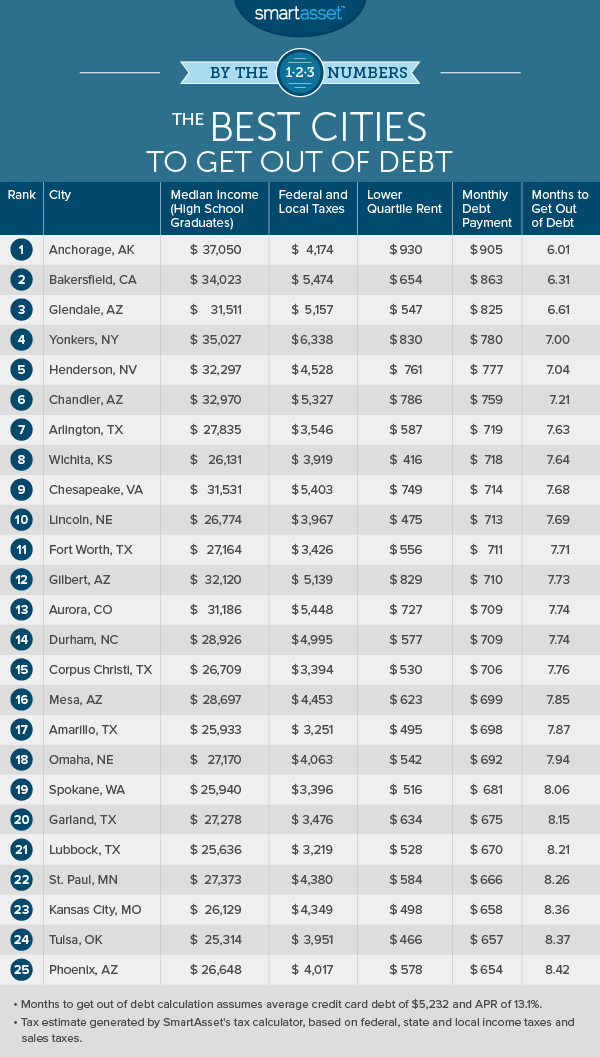 To find the best cities to get out of debt, SmartAsset looked at data from the U.S. Census Bureau on every U.S. city with a population of at least 200,000 – 126 cities in total. For each of those cities, we found the median income among high school graduates (not including those with higher levels of education).

Based on that median income we calculated an expected after-tax income for each city, using our tax calculator. From that after-tax income, we subtracted the annual lower-quartile rent in each city to arrive at a disposable income. (Lower-quartile rent is the amount that 25% of all renters in the city pay less than and 75% of renters pay more than. Data is for 2014 and comes from the U.S. Census Bureau.)

We assumed that another 50% of that disposable income would be spent on basic expenses such as food and clothing. The remaining 50% would be devoted to debt payments. This is higher than most households dedicate to debt payments, but we are assuming the goal is to pay down debt as quickly as possible (aka the person is very motivated to become free of credit card debt and willing to sacrifice other things).

Note: SmartAsset’s calculations are based on averages and do not represent the amount of time it would take to pay down debt for any specific person. For someone with higher debt or lower income, for example, the time to pay down debt will be longer. Check out our credit card calculator to see how long it will take you to pay down your debt.