The Most In-Demand Jobs in the U.S. 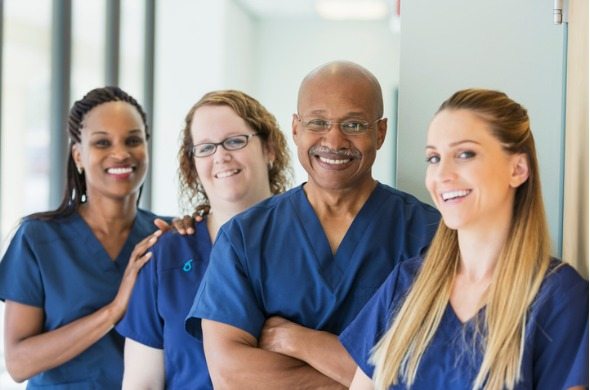 The job market can change quickly. The decline in manufacturing jobs was a focus during the 2016 presidential election and the BLS projects some jobs like data entry keyers will be in serious decline by 2026. To stay ahead of these trends, and to make sure your savings account never runs dry, it’s a good idea to know what jobs are most in demand. Below we rank those jobs looking at which have the best short- and long-term prospects.

In order to determine the most in-demand jobs, SmartAsset looked at data on four metrics. We looked at growth in employment from 2015 – 2016, percent change in average incomes from 2015 – 2016, expected growth from 2016 – 2026 and expected percent change from 2016 – 2026. Check out our data and methodology below to see where we got our data and how we put it together. 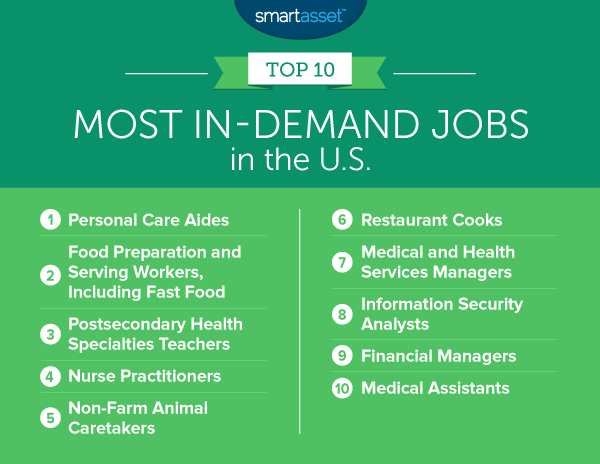 The Bureau of Labor Statistics estimates that the number of people employed in this occupation will grow by 16.8%, or 579,900, from 2016-2026. This occupation ranks 39th and 2nd for those two metrics, respectively.

If you like working with animals and don’t want to become a veterinarian, this could be an interesting occupation for you. The BLS expects the number of non-farm animal caretakers to rise by 21.9% from 2016 to 2026. That’s the 20th-fastest rate in our study. From 2015-2016, the number of people employed in this occupation rose 7.6%.

If you are looking to earn a lot of money while working with animals it may be best to go the veterinary route. The average non-farm animal caretaker earned under $25,000 in 2016.

Restaurant cooks do not earn too much, but the job also has no educational requirements and requires less than five years of experience. Plus, if you excel in your role as restaurant cook you have the chance of becoming head chef, an occupation which paid almost $48,000 per year, on average in 2016.

People in this profession plan, direct and coordinate medical and health services. According to the BLS, this occupation is expected to grow by almost 20% for the same reasons as personal care aides: with more people ageing, the demand for health care services will rise.

One concern for people in this profession might be the relatively slow income growth. From 2015 to 2016, the average health services manager’s income rose by only 3.1%. For that metric it ranked a low 125th.

If you’re worried about the slew of data breaches which took place over 2017, you may take some comfort in the fact that the number of information security analysts is growing. This occupation is growing as a response to the increased threat of hackers, according to the BLS.

Financial manager takes ninth. This job did not grow much from 2015 to 2016 – only 2.3% – but the BLS expects that number to pick up as the decade rolls along. BLS projections show an estimated increase of 19%, or 108,400 total employed financial managers from 2016 to 2026. Financial managers ranks in the top 30 for both metrics.

Unfortunately, workers in this occupation may need to plan carefully for their retirement as this is not a high-paying job. The average medical assistant earned $32,850 in 2016.

In order to find the most in-demand jobs, SmartAsset looked at data for 411 occupations. We eliminated occupations with unclear titles like “engineers, all other” and “physicians and surgeons, all other” from our final rankings. We analyzed the occupations in the following four metrics:

Most people stick the money they are not investing or saving for retirement into a normal savings account. But not every savings account is the same and different banks offer very different interest rates.

The best saving accounts are places that allow your money to grow as much as possible, this means banks that offer the highest interest rates and no or low fees. Some online banks in particular offer interest rates over 1%, and don’t have minimum deposit requirements or monthly service fees.

But just because there are some great savings account options available, putting money in one should not always be your only priority. Paying off high interest loans, like credit card debt, should come first and then building an emergency fund should be second.