Cities With the Youngest Workforces – 2021 Edition 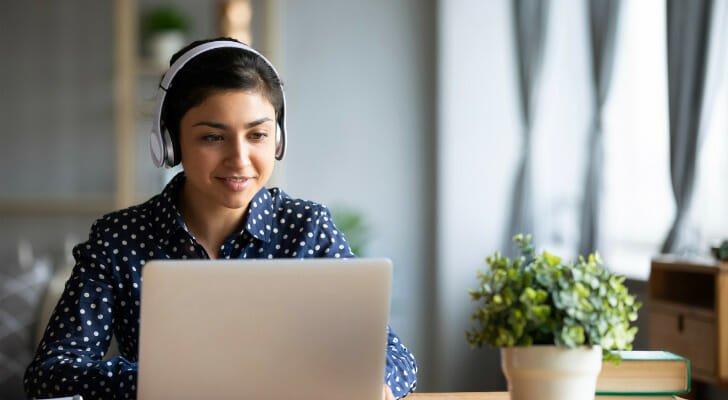 While Baby Boomers and Generation X are now the bosses at many companies, more than 25% of the workforce is younger than 30. This means that Generation Z (born between 1997 and 2012) and millennials (born between 1981 and 1996) are emerging as the generations to soon comprise the largest percentage of workers.

Starting your career at a young age provides more time to build up your savings and create a retirement plan with a financial advisor. Some cities offer younger workers more opportunities for gainful employment and SmartAsset crunched the numbers to find out where younger employees make up the biggest percentage of the local workforce.

To do this, we studied data on the 100 largest cities in the U.S., analyzing the number of workers younger than the age of 30 as a percentage of total workers. For details on our data sources and how we put all the information together to create our final rankings, check out the Data and Methodology section below.

This is SmartAsset’s second annual study on the cities with the youngest workforces. You can read our 2020 edition here. 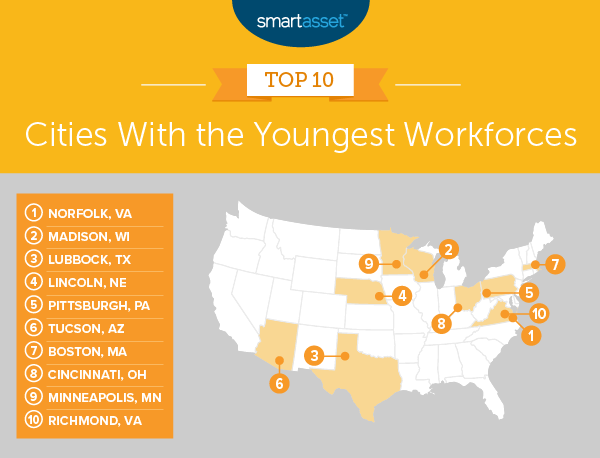 With a workforce of almost 42% that is younger than 30, Norfolk, Virginia ranks at the top of our list. This city also has the fifth-highest workforce participation rate for younger workers in our study, at 80.4%. One of the major drivers behind the city’s employment of people in this age group is the naval base, which is the largest in the world. Our study reveals that almost 21% of all Norfolk workers are employed by the armed forces.

Home to the University of Wisconsin, Madison has 38.93% of its workforce made up of people ages 16 to 29. The labor force participation rate for this age group is 74.8%, 25th-highest in our study. Education, healthcare and social assistance industries are the biggest employers in Madison, comprising 32.57% of the total workforce.

Lubbock, Texas is yet another college town, the home of Texas Tech. People ages 16 to 29 make up 37.79% of the workforce in this city. But the workforce participation rate for this cohort is only 66.3%, ranking 80th out of 100 in our study. The relatively low figure for this metric could be impacted by the large university population, which, although eligible for the workforce, is largely unemployed during its student tenure.

Lincoln is the home of the University of Nebraska. This city has a total of 166,354 workers, and 59,184 are younger than 30 – making up 35.58% of the workforce. Education, healthcare and social assistance are the biggest industries in the city, employing just over 27% of all workers. Retail is also a major industry in the city, hiring 10.85% of the workforce.

Pittsburgh, Pennsylvania used to be dominated by steel production. But now, the University of Pittsburgh Medical Center is the major employer. In fact, education, healthcare and social assistance jobs make up 32.03% of the city’s workforce. And workers ages 16 to 29 make up 35.25% of the total workforce.

Boston, Massachusetts has the biggest workforce in the top 10 of this study, with 426,238 workers. And 149,695 of that force is younger than 30, meaning that 35.12% of the total workforce in Beantown is 16 to 29. Boston is another city where education, healthcare and assistance services dominate, employing 31.17% of the workforce.

Younger workers make up almost 35% of the total workforce in Cincinnati, Ohio. The number of workers ages 16 to 29 is 57,014, and their labor force participation rate is just over 70%. Education, healthcare and social assistance are the biggest industries, employing just over 27%. But manufacturing remains important in Cincinnati, accounting for 10.62% of the workforce.

Minneapolis has the seventh-highest labor force participation rate for workers younger than 30 in our study – almost 80%. Overall, younger people (ages 16 to 29) make up 34.87% of the workforce in the city. Almost 27% of those employed in Minneapolis work in education, healthcare and social assistance, with retail comprising more than 10%. 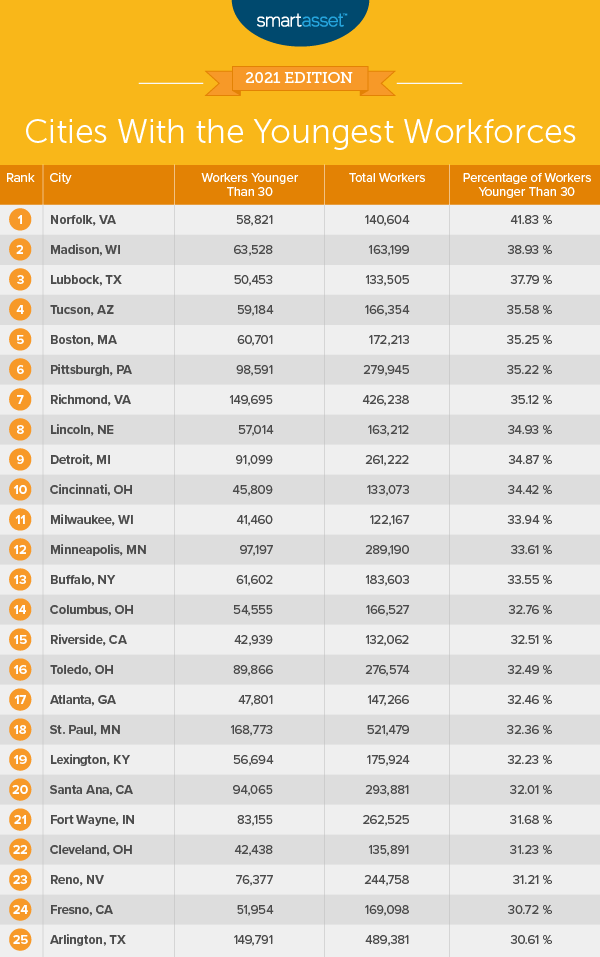 To find the cities with the youngest workforces, we examined data on the 100 largest U.S. cities. Using population data and labor force participation rates from the Census Bureau’s 2019 1-year American Community Survey, we found the percentage of the workforce younger than the age of 30 (i.e. between 16 and 29 years old) in each city. Cities with the highest percentages of younger workers ranked at the top of the list, and those with the lowest percentages of younger workers ranked at the bottom of the list.

Tips for Managing Your Money at the Start of Your Career